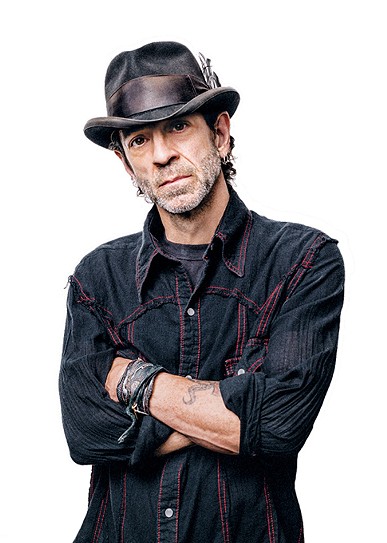 If you went to see Travis Meadows in Oklahoma City in the ’90s, he was probably delivering a sermon.

“Way back in the preacher days,” Meadows said, “I used to speak at some churches out that way, but it’s been a long time ago in a life far, far away.”

The Mississippi-raised, Nashville-based singer-songwriter has co-authored songs recorded by Dierks Bentley (“Riser”) Eric Church (“Dark Side,” “Knives of New Orleans”) and Jake Owen (“What We Ain’t Got”), but he spent 17 years traveling the South as a preacher after converting to Christianity in his 20s. He said he learned at least one important thing from praise and worship music.

“Melodies,” Meadows said. “Christian melodies and hymns, when I was coming up, was in that worship craze where all the churches were making that move from the old hymns to worship music. The lyrical content was atrocious, but the gorgeous, beautiful melodies are easy for people to sing along and remember easily. Everything I was working on when I was writing back then was kind of more tools for the woodshed. If you do anything long enough, you begin to get good at it. I had written way before then, but that kind of helped solidify the writing process, really helped with melodies, and I think there is something to be said for easy, catchy melodies.”

Meadows began playing in bands before he was old enough to enter the bars legally. Traditional employment options were limited after he was diagnosed with bone cancer at the age of 14 and lost his lower right leg to the disease.

“I actually took a test in the state of Mississippi one time, to help you sort out what you want to be careerwise, and every single thing was something that, it wasn’t that I couldn’t do it, but that they wouldn’t hire me because I was missing a leg,” Meadows said. “Highway patrolman, game warden, soldier — all of these things I was immediately disqualified. I was turned down for a job in the meat department at a grocery store where my friend was working. I applied and I thought it was a shoo-in, then he called me and told me that the job wasn’t available and something about insurance, and I hear his boss in the background yelling, ‘Dammit, don’t say that! We can’t let him know that! That’s illegal! Just tell him the job’s filled.’ I had a family doctor at 21 tell me, basically, ‘Buddy, you’re a liability. You get over there on the ice and fall down and you could sue the store. So just swallow that jagged pill.’ So that, in a roundabout way, pushed me to pursue music. Most of the good things that happened in my life were accidental.”

When he began writing songs for his 2011 breakthrough Killin’ Uncle Buzzy, Meadows, undergoing rehab for drug and alcohol addiction, wasn’t sure he’d even want anyone else to hear them.

“I was in a really bad place, and one of my counselors suggested I make the record,” Meadows said. “So it was basically survival just trying to figure out a way to get my head clear and try to get my head out of my ass and move forward without dying.”

Though songs “Davidson County Police,” “It Ain’t Fun No More,” and “What We Ain’t Got” contain catchy, memorable hooks and melodies, nothing about the stories they tell and truths they reveal seems easy.

“This record documents almost seven months of me climbing out of a hole that I dug for myself,” read the liner notes for Uncle Buzzy, “a glimpse into the thoughts and honest emotions found in their struggle.”

Though the album and follow-up Old Ghosts & Unfinished Business generated buzz from musicians and critics, Meadows said he wanted 2017’s First Cigarette to offer his audience something more than recollections from his “painful past.”

“I had been singing these extremely painful songs for several years, and First Cigarette was the first time I looked and put myself in the listener’s chair and went, ‘You know, if I had to sit here for 90 minutes listening to these depressing songs, I’d want to shoot myself in the face,’” Meadows said. “So I intentionally started writing and thinking about some levity, some light and some hope that would fit strategically through some of the heavier content on the record and still not move too far away from what my fans have grown to expect: intelligent and slightly depressing music.”

Though he said opener “Sideways,” which warns about the dangers of repressing painful memories and emotions, is “as dark and deep and as powerful” as anything he’s ever written, more upbeat songs such as “Underdogs,” “Guy Like Me” and the Springsteen-referencing “Pray for Jungleland” are intentionally placed to keep the album from feeling too heavy.

“Some of those are a little lighter to give you a minute to catch your breath,” Meadows said. “It’s like a little bit of comedy in the middle of a horror flick; you just get a break for a minute, a little reprieve if you will.”

He continues to draw inspiration from the ongoing rehabilitation process.

“I get some of my best ideas from recovery meetings and conversations with likeminded people that are as fucked up as I am,” Meadows said. “There are some very creative people in the circles of the recovery community. Drug addicts and alcoholics are some of the smartest, cleverest, wittiest people alive. Some of them just happen to kill themselves in the process, but you can learn a lot from them.”

First Cigarette’s title track states, “I’m a little more content with who I am than who I was.” The lyric reflects Meadows’ present mindset, he said, simply because he’s never been able to relate anything but his own perspective and experience.

“I’m going to admit something to you,” Meadows said. “I don’t know how to write any other way. …  The songs come from living. Some of the better ones come from going through really difficult, challenging situations, and I wish there was a different plan, but sometimes that’s the way it works. … Life will treat you like a pinball, and you get bumped around and stumble into something that makes sense and you embrace it and start being what that is, and that’s the way music is for me.”