“He wouldn’t let us be just good enough,” Simmons said. “If we could make it better in certain spots, he would definitely encourage us to make it better.”

Coming up with a title can be the hardest part of any creative endeavor. One can opt for something plain and descriptive or something original and creative. Often, inspiration pops up where it’s least expected.

Limp Wizurdz vocalist and guitarist Taylor Young found himself in such a predicament with bandmates and their energetic and occasionally jocular Norman pop punk quartet. When named almost five years ago with a moniker inspired by Fred Durst-led nu-metal band Limp Bizkit, the act was working on an eight-song EP that promised to be the group’s most polished and well-composed release to date. But the project lacked a name.

As Young rewatched the popular AMC drama Breaking Bad with his girlfriend, an idea struck him.

“I heard [lead character Walter White] say, ‘fugue state,’ and I started relating that to our lives,” Young said. “All of our lives at this stage are kind of like a fugue state. In your early 20s, you feel pushed in all these different directions. By the time you come out of it in your mid- to late-20s, you’re like, ‘Man, did all of that really happen?’ It’s crazy because you grow so much.” 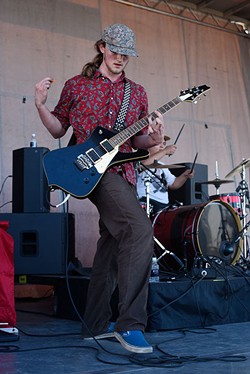 Young is joined in Limp Wizurdz by guitarist Jeff Simmons, bassist Frankie Kump and drummer Rodrigo Serrano. Young said the general daze of living through your early 20s is not necessarily a bad thing. In fact, bandmates have made a habit out of enjoying life since its 2012 inception.

The new EP, however, might signal the lifting of that youthful mist from Limp Wizurdz as its sound transforms into one that’s more mature and thoughtful.

The project features five new tunes and three redubs. Simmons said the band began writing for this project about a year ago and recorded most of the album over the summer.

While praising the work of other contributing producers on previous albums, Simmons said Jean made sure the band met its maximum potential.

“He wouldn’t let us be just good enough,” Simmons said. “If we could make it better in certain spots, he would definitely encourage us to make it better.”

This sharpened attention to detail doesn’t mean the band has suddenly become self-important. In the video for lead single “Staple Gun,” released Nov. 18, members poke some fun at stuffy office life and lament the grasp of societal powers that be.

Limp Wizurdz might have moved on somewhat from the carefree recklessness of songs like “30,000 Cigarettes,” but this is still a band that is, above many other things, fun.

“We’re all getting older and it’s getting to the point where — between the work and the band stuff — if we’re going to do it, I feel like we need to take it seriously,” Young said.

It makes sense that a Breaking Bad reference would sneak into the Limp Wizurds catalogue. With members in their early 20s, it’s an act borne of the Netflix generation.

Simmons said he has been watching Showtime comedy-drama Shameless, and Young and his girlfriend are revisiting teen drama Degrassi.

“It’s weird to watch [Degrassi] from an adult perspective, too,” Young said. “I see it a lot different now. There’s a lot of situations where I was like, ‘Really? That’s really happening?’”

The band’s Opolis show also serves as the launching point for its 2017 tour, and it’s scheduled to play a house show in Rockford, Illinois, the following night. Young said they plan on hitting the road with loyal friend and roadie Jacob Randolph immediately after the Norman show.

It might seem daunting, but Young said they are in safe hands with Serrano behind the wheel.

Young said the band generally prefers house shows, but after a long day of travel, such gigs can present some headaches.

“The thing I’m worried about is I hope we don’t drive 13 hours overnight and show up at this guy’s house and it gets shut down in, like, 30 minutes,” Young said.

Still, the band is confident it will have a good time on the road. Longtime friends Young and Simmons recently became roommates, which has only strengthened their chemistry and antics.

“Rod and Frank are going to have a good time,” Simmons said, “but we’re a little crazier than they are sometimes.”

Added Young, “I don’t think they’re truly ready for the dynamic duo. I mean, it’s going to be hell for everyone.”

with RLSS and Flock of Pigs