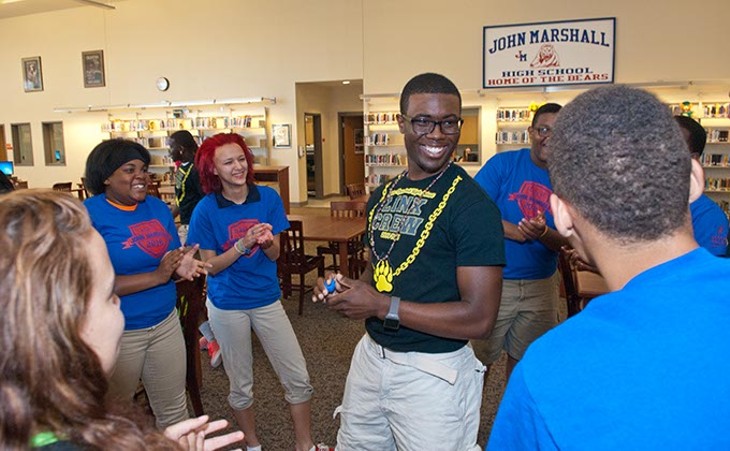 Malachi Mills is a few weeks into his high school career, but he is already determined to reach graduation in four years.

“Me and my brother will actually be the first two males in our whole family to pass high school and go onto college,” Mills, a freshman at John Marshall Mid- High School, said matter-of-factly.

Mills’ brother, in seventh grade, is dealing with academic and behavior issues that Mills is trying to help him address.

“He’s having a lot of trouble with his work, and I’m trying to help him through it,” Mills said.

Mills sees himself as a mentor to his little brother, and a new program at John Marshall is giving him a firsthand look at the importance of having a mentor.

“He has taught me how to juggle my credits and still do after-school activities,” Mills said about Vincent French, a senior at John Marshall who is Mills’ Link Crew mentor. “Vincent taught me how to juggle time and that I need to get homework done and hang out another day. I’m also trying to help my brother see the importance of school.”

Link Crew is a program that connects incoming freshmen with upperclassman mentors and is the product of a partnership between the Oklahoma City Public School District and the K20 Center for Educational and Community Renewal at the University of Oklahoma. Link Crew is utilized at nine high schools in the district with the belief that the first year in high school can make or break a student’s future. Link Crew allows junior and senior students to help advise freshman on the importance of academics, along with giving them more insight into the high school career.

“A problem for me freshman year was I didn’t really do my homework or did it the day it was due,” French said. “But I learned I should have done it earlier and it would have been way easier. I told [Mills] you have to do work when it’s fresh on your mind and make sure it gets done.”

Each mentor is linked with a few freshmen students, and during a summer orientation, the students had a chance to meet each other.

“When we went to freshman orientation, I gave them all my cell phone number so they could ask me for advice,” said junior Kiera Bowen. “The other day, one of my Link Crew [students] sent me a text asking if I could help tutor him. I told him, ‘Yes, I am here for you.’”

Jordan Cole said he often texts freshman Mykaela Salcido or meets with her. “My advice to her was don’t do too many activities because [school] won’t be fun,” said Cole, a junior at John Marshall. “I tell her to manage what’s on your plate, don’t do too much.”

It’s advice and a relationship Cole wished he had as a high school student.

“When we were freshmen, we didn’t really have the opportunity for someone to guide us,” Cole said. “This is a big help.” 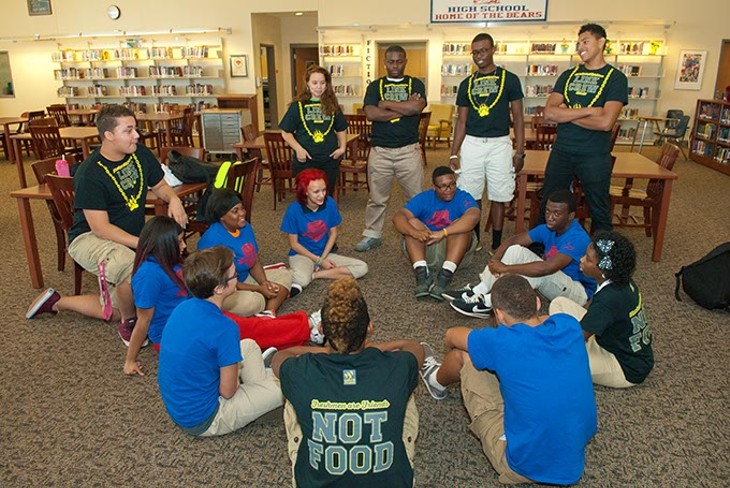 Research has shown that freshman year is often the most important and most challenging in a student’s school career. A report published in the journal Education said freshmen students typically have the lowest grade point average, the most missed classes, the majority of failing grades and more misbehavior referrals than any other high school grade level.

“While the transition from middle school to high school can represent an important milestone, it can also be a time of loneliness, isolation and disconnection for some students,” wrote Kyle Megan McCallumore and Ervin F. Sparapani in a report titled The Importance of the Ninth Grade on High School Graduation Rates and Student Success in High School. “This transition period is frequently marked by declining academic performance, increased absences and increased behavior disturbances.”

Freshman year is often the first experience a student has with classes that are mandatory for graduation, and study habits are expected to be increased.

“As a freshman, you kind of walk in without guidance and are kind of blind,” Cole said. “Your freshman year is where you start you foundation for your future.”

The Center for Promise at Tufts University has also explored American dropout rates and the link to freshman year.

“More and more of us are realizing that it’s the make-or-break year for many 14- and 15-year-olds,” Jon Zaff, director of the center, told The Atlantic. “It’s a time when the cognitive, emotional and physical are all coming together. The schools are likely new environments, and the students have more autonomy and more homework.”

The encouragement to handle that emotional and physical toll is sometimes best administered from older students rather than a teacher.

“With Link Crew, I come in and see those guys have made it and they have gone through all the years of high school, so I can do it,” Salcido said. “I think it takes a little bit of the pressure off.”

Mentors spend time once a month talking with freshman about academic goals, and activities are planned, such as football tailgate parties. One-on- one interactions between mentors and freshman are also common, as strong friendships emerge from the program.

“We are not only mentors but we are actually becoming friends,” Cole said. 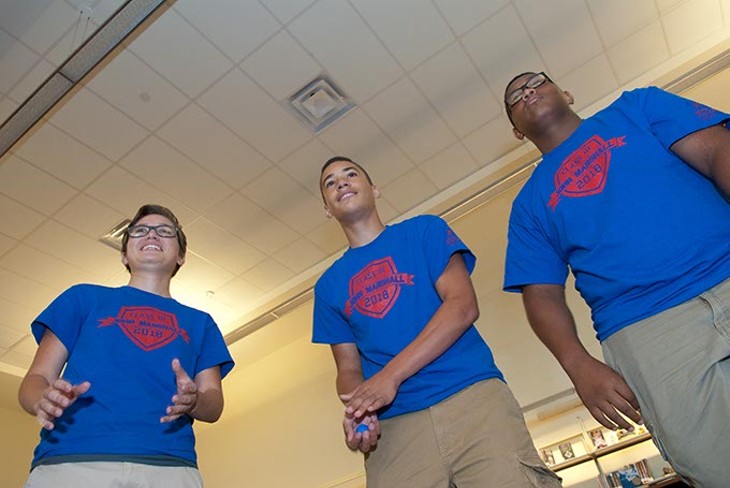 “To me, this is really special,” French said about the first-year program. “Not just for the [freshmen]. But it has changed who I am because it makes me think about my little brother and my little sister and how they handle school.”

Freshmen receive life skill lessons, but upperclassmen also learn mentoring skills that they can take with them beyond high school.

“When I was a freshman, I was so childish,” Bowen said. “But I have learned that I have to really focus. [Link Crew] is getting us prepared.”

Nationwide, the rate of freshmen who end up repeating the grade is near 22 percent, and being held back can be a precursor to dropping out of school. French likens the experience to a track where fatigue can easily set in.

“You keep on running and running and you are tired and you can just give up like that,” French said. “But if you have a person there telling you to keep going, you are going to keep running until you’ve achieved what you thought you couldn’t.

“This is what this Link Crew is about. We are linked together to become something greater than we thought we could be.”