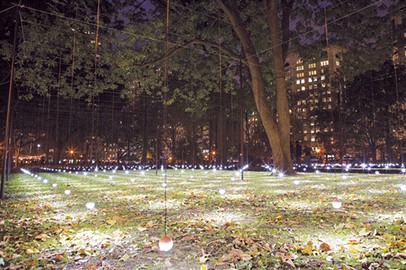 Relocating from New York City to Oklahoma City requires some adjustment, even for a configuration of LED lights embedded in transparent white spheres suspended from a grid of steel poles and cabling.

“We’ve actually had a relationship with them for a while,” said Jennifer Scanlan, curatorial and exhibitions director at Oklahoma Contemporary. “They commission a large-scale piece from a lot of really interesting contemporary artists … and they reached out to me, saying, ‘We have this piece and we’re looking to find another venue for it when it closes here in New York. Would you be interested?’  It’s part of a great, ongoing relationship we have with the New York conservancy. It would be sort of a high ticket for us to be able commission on our own.”

Redl’s work, which displays lights in preprogrammed patterns and sequences, will need to be rearranged to accommodate the space and layout differences between Madison Square Park and Campbell Art Park, Scanlan said, but reconfiguring the grid will also allow Redl a chance to make adjustments and improvements.

“There were two parallel rectangles, like an equals sign, because they had a big, wide space in New York City to put those,” Redl explained, “and we have a long, thin space, so the two pieces are kind of going to be merged a little bit, and they have a different format. When an artist — in this case Erwin Redl — gets a chance to do an installation once, much like a project you or I might do once, you do it once and you look at it and you’re like, ‘I could do this better,’ or ‘I could do this differently next time. These are the things that I learned about this piece, so let me try something slightly different next time.’ And that’s exactly what he did.”

Whiteout 2.0 will feature a more involved layout to create more intricate patterns with the lights, which are suspended from the grid of cables about 18 inches off the ground.

Redl visited Oklahoma City to survey the space and then returned to supervise the installation.

“What he does basically is everything gets set up, the structure gets set up and then he, from his laptop, manipulates the program, the sequencing of the lights, when they’re going on and off,” Scanlan said. “So he’ll just sit out there with his laptop and type in the code and test it out and see how it works in the space. So he’s really doing it onsite to react to what we have. We have, for example, different lighting conditions, and that’s going to be a huge difference from New York, and you experience the piece in a much different way because it’s not in the middle of a park. It’s right next to the road. There’s going to be different sounds. There’s not going to be skyscrapers all around it. Oklahoma City is much more horizontal, and New York City is much more vertical. So that’s going to be different, and maybe even things like the ground will be different so it will be reflecting the light in a different way. There’s going to be fewer trees. It’s very important to him that the piece works with the space it’s in, so he’ll just spend hours out there testing different patterns, testing different things to see what really works best for our space.”

“Most of the visual effects are created that way, essentially from the lights going on and off, but that’s not something you’re going to notice as much as you’ll notice the movements and patterns,” Scanlan said. “It’s like on a computer screen; you don’t really notice the pixels going on and off. What you notice is the image on the screen. … In a secondary way, the wind will create different things, the way the lights cast reflection on the ground or on the trees will change too. And of course, different times of the day or night, the piece will look differently.”

Redl will discuss his art works and the process behind them 6-8 p.m. Oct. 10 at 21c Museum Hotel, 900 W. Main St., and visitors will also be able to attend half-hour interactive discussions about the exhibit led by Oklahoma Contemporary staff onsite at Campbell Art Park, weather permitting, through March 14. Morning talks, titled Start With Art will feature coffee for sale from Coffee Slingers Roasters for art lovers who want a caffeine fix.

“We have monthly talks,” Scanlan said. “We’ve got a couple of different kinds of programs that will get people out there, just to see something beautiful and inject a little bit of beauty and art into their day.”

When compared with the New York City exhibition, the experience of viewing Whiteout in Oklahoma City will be limited in at least one way, Scanlan said, but the ambiance in Oklahoma City might be more pleasant.

“We’re going to try to get some drone footage as well because, of course, there’s a whole different effect when you get to be up above it,” Scanlan said. “In New York, you did have the opportunity to see it from above, now that I’m thinking about it, because any of the buildings around it, you could go up and watch it from above. So we’re going to kind of miss out on that experience in Oklahoma City, but on the other hand, there’s a lot more serenity in Oklahoma City. You don’t have tons of people in cars honking and ambulances and all that stuff that you hear all the time in New York.”

And OKC does have a factor that will make the patterns in Whiteout’s lights more dynamic.

“They’re basically all suspended on wires, so they move in time with the wind,” Scanlan said. “Redl’s really interested in those kind of environmental conditions. So I was like, ‘OK, great. We’ve got a lot of wind in Oklahoma, so this is going to work out really well for you.’”