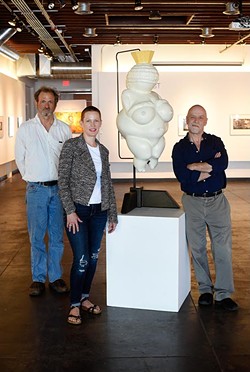 Any thorough art history class begins with Venus of Willendorf, a hand-sized statue of a woman carved in the Stone Age and discovered in Austria in 1908.

The piece is often called a fertility goddess and is known for showing early reverence to the pregnant female figure.

For his Biting the Apple submission, sculptor David Phelps wanted to take the statue to bigger and more modern heights.

“It’s kind of playing with the idea of voyeurism in a lot of erotica and privacy,” Phelps said. “In my mind, there’s a strong correlation between fertility imagery and erotica.”

Phelps’ work is just one piece of many that will be on display at the 31st edition of Biting the Apple.

Marilyn Artus is this year’s juror for Biting the Apple. The local artist has been attending the events for the past eight or so years. She has served on IAO’s board of directors and was once the vice president of the organization.

In her experience, Artus said Biting the Apple is a joyous event for everyone involved.

“It just seems like people have such freedom to get to look at erotica,” she said. “It just makes people happy because usually in public, you have to kind of keep cool.”

Biting the Apple is more than just a chance to observe art with sexual themes. Attendees often become erotica themselves. The event has become known as an edgy costume party. Artus said she has seen people wearing anything and everything.

“It’s not just the visual art. It’s the performance art, it’s the people that attend, their kind of performance thing that they do,” Artus said. “It’s just got a lot going on.”

More than 20 visual artists will have work displayed in the coming show.

“People are interested in that, I’ve heard,” Gilmore said.

Gilmore operated an arts center on 50th Street and North Classen Boulevard in the 1980s. When he went to visit the studios of other artists, he began to notice they would often pull out a steamy work from a private stash to show off to him. Often, the artists were really attached to these pieces but didn’t have anywhere to display them. No other gallery at the time would display something perceived to be obscene.

“They weren’t doing it at all for show,” Gilmore said. “When I started seeing enough of those pieces, I saw that there was a body of work to show. I thought it was a service to artists to give them a serious place to show their own personal works.”

Gilmore put on the first Biting the Apple in 1985. The event attracted about 300 people and was met with some local resistance. A family organization heard about what they were doing and came to picket the event.

The pushback did nothing but strengthen the show’s following. The second year, more than 1,000 people showed up.

In 1987, Biting the Apple was given a significant boost in notoriety following a story detailing the event in Hustler.

Gilmore organized Biting the Apple for six years before handing it off to IAO. He remembers that the biggest year they ever had was when the event was held in the Paseo Arts District. Thousands of people arrived, and every art studio was involved.

“It was the ’80s, and it got way out of hand,” he said. “I remember there were pickup truckloads of alcohol. It was a hand-stamp type of thing. A lot of people didn’t get their hand stamped.”

Gilmore said Biting the Apple started as a sort of social experiment; an opportunity to put a volatile situation together and observe what would happen next.

It’s an experiment that has been repeated for more than three decades.

Artus said a broad spectrum of artists have participated in the event’s history, even those you might not think would be interested in erotica.

“It can be like a palate cleanser or a reset, something fun to do to get creative again,” she said. “It gets boring sometimes making the same thing all the time.”

In her own work, Artus said she tries to focus on feminist issues. The chance to promote a dialogue about sexuality in Oklahoma is something she looks forward to.

“For me, it’s almost like women are still floundering with our sexual identity to some degree,” she said.

Sexuality is often stigmatized. Artus wants women to enjoy sex and take control over it, own it and not let someone else dictate to them what it should be.

“[Biting the Apple] puts people together and forces them to confront sexuality,” she said. “I think that’s something we need to do. And it’s fun.”

For more information or to order tickets for Biting the Apple, visit individualartists.org.