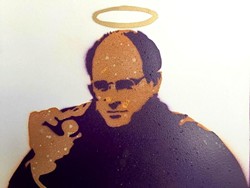 Some people don’t know why those phrases are hilarious. For the rest of Oklahoma City’s close-talkers, regifters, anti-dentites and masters of their respective domains, Brass Bell Studios presents An Art Show About Nothing, opening 5 p.m. Sunday at 2500 NW 33rd St.

The free group art exhibit celebrates the studio’s five-year anniversary. Gallery operator and local artist Ashley Smith said once the idea of creating Seinfeld-inspired art got stuck in her head (“Co-Stan-Za!”), she never even considered another theme for the show.

“Once we came up with the theme, I just couldn’t stop thinking about it,” Smith said. “I’m part of the generation that started watching Seinfeld when it was first on, when you waited every week for new episodes. I’ve watched it religiously for years.”

The sitcom ran from 1989 to 1998 on broadcast television and included nine seasons and 180, 22-minute episodes. It has been in syndication since 1992 and was recently picked up by Hulu streaming video service. 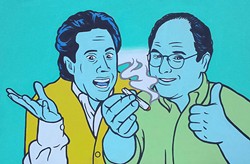 “There’s been a resurgence of Seinfeld,” Smith said. “You’re hearing a lot of chatter about it again, even from people who never watched it when it was on TV.”

If the sitcom about nothing is gaining new fans, they’re joining cultists who already know the names of George Costanza — lead character Jerry Seinfeld’s best friend — and his imaginary Hamptons horses.

Longtime fans also know which disease Cosmo Kramer “performs” for medical students and why nobody should trust Bob Sacamano Sr. (or junior, for that matter).

Seinfeld fans or not, most people are familiar with the show’s broad strokes. Manhattan neighbors Jerry, Kramer, George and Elaine might be more recognizable now to the average person on the street than John, Paul, George and Ringo.

Snippets of dialogue — “Yada yada, yada,” “No soup for you,” “Not that there’s anything wrong with that!” — took root in everyday American lexicon like nothing else this side of Shakespeare.

Seinfeld’s entire premise, after all, was based on the esoteric, the small, the overlooked. Smith said obscure details, characters and the depth of the Seinfeld universe makes her excited for this show.

“When you’ve seen all the episodes and you’re a big Seinfeld fan, there are so many characters and lines and phrases that you start remembering,” Smith said. “It’s been interesting to see the ways artists are going with this, because it shows you that Seinfeld has that following, almost like Star Wars.”

When pressed on her favorite episode, Smith pointed out another unique aspect of the Seinfeld phenomenon: Episodes don’t really matter. Everyone has favorite scenes, and she describes those.

“Oh my god. Whenever Jerry’s on the phone and he says, ‘Who is this?’ I lose it,” Smith said. “It never gets old. … I can quote that show line for line; it’s kind of like my religion. My friends know Seinfeld is part of who I am.”

Up to 30 OKC artists are similarly geeking out over An Art Show About Nothing.

It features Amanda Shelton’s portrait of a waitress George believes is giving him the finger; Kevin Lee’s Edward Hopper-esque rendering of Tom’s Restaurant (aka Monk’s Café); and Micah Moad’s pop-art rendering of Costanza, a halo hovering above his bald head as he holds a golf ball he pulled from the blowhole of a beached whale.

They speak to the depth and variety viewers can expect from art about nothing and how much fun the sitcom really was.

In that spirit, Smith designed koozies for the show, free to guests who dress up as their favorite Seinfeld character (or buy art, of course). One side features the show logo. The other says, “These pretzels are making me thirsty!”

She said she believes An Art Show About Nothing might be the biggest thing since the Newmanium.

Print headline: Yada, yada, Around 30 local artists join Brass Bell Studios’ group show about nothing, not that there’s anything wrong with that.

An Art Show About Nothing