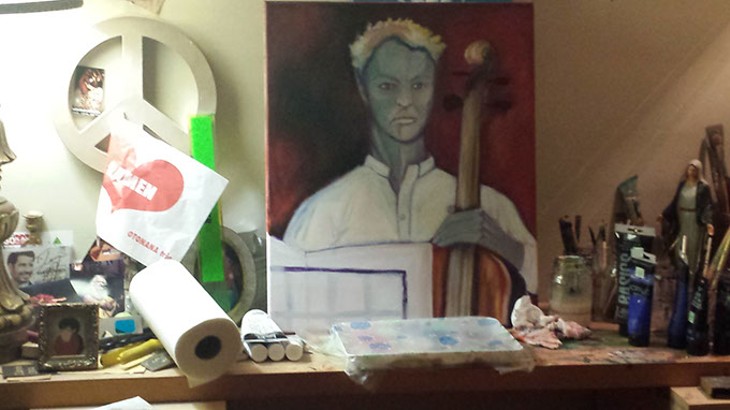 An unexpected move by Back Alley Gallery in 2015 inadvertently gave local artists the opportunity to give David Bowie a proper farewell.

Laura Sullivan wanted to hold the Bowie Blow Out Tribute Art Show during the holidays but was forced to put it on hold when Back Alley Gallery’s former location, 5026 N. May Ave., closed with the intention of finding a new, expanded location. A musical tribute by Kali Ra also was scheduled.

Despite that, Sullivan remains determined to make the show happen. Back Alley, she said, has promised to host the tribute show when it reopens. The art and music tribute is tentatively rescheduled for Feb. 27, but it might be necessary to reschedule again. Regardless, Sullivan’s call for art submissions remains open as the community response continues to build.

The need to see the show through took on more significance following Bowie’s Jan. 10 death from cancer. Sullivan was deeply impacted by the news.

“If you didn’t have family, you found family,” she said. “If your family rejected you, you found family in artists like [Bowie]. So for a lot of people, when Bowie died, it was like family died. I know I felt that way. It was legitimate mourning.”

Sullivan said it’s likely proceeds from the tribute will go to cancer research or another charity.

One of the reasons she chose to do a Bowie show in the first place is he was a man who took on many different forms and identities through the years. Will artists commemorate him by creating their interpretation of Ziggy Stardust, a more refined Bowie, Labyrinth?

Kali Ra vocalist David Goad said he still plans to pay musical tribute when the event does occur. In the meantime, his band plays a Bye Bye, Spaceboy tribute 8 p.m. Saturday at Blue Note Lounge, 2408 N. Robinson Ave. Goad also said he would donate any money he makes from tributes to cancer research.

“I owe David Bowie a creative debt,” he said. “He’s responsible, I think, for my validation as an artist. Without him, there would be no reference for what I do and it would be a lot more easily dismissible.”

“I could fall asleep at night as a rock ’n’ roll star.”

Lyrics from Bowie’s “Star” tattooed onto Goad’s forearm are a daily reminder about his significance as an artist.

Goad became aware of Bowie’s artistic impact as a teen. Acts like Bauhaus cited his influence. At 16 or 17, Goad began listening to Bowie.

“Over the course of years from then, I became more personally identified with the enigmatic quality of his art and music,” he said. “I really gravitated toward that, I think, more than anything else.”

Through Bowie, Goad said he and countless others have learned there is no wrong way to make art.

The Wurly Birds, a local rock band, performed The Rise and Fall of Ziggy Stardust and the Spiders from Mars in its entirety Jan. 22 at 51st Street Speakeasy. Vocalist and guitarist Taylor Johnson said the band had the date for the show scheduled before Bowie’s death, but after they heard the news, they turned it into a tribute.

“Since so many people resonate with Bowie's music, I thought it'd be a big communal homage to him where everyone could come and enjoy the music and the show,” he told Oklahoma Gazette in an email.

Johnson said Bowie’s versatile and enigmatic music has had an impact on him since age 10, when his uncle gifted him Ziggy Stardust.

“The fact that he used his death as part of his art [on the album Blackstar] is incredibly artistically visionary and another avenue of his unexpected twists on things,” he said.

Now more than ever, Goad said he thinks the onus now falls on artists and the music industry to work on their original stuff.

In lyrics on Blackstar, Bowie’s final and, apparently, farewell album, the Starman seemed to be passing the creative baton.

“Something happened on the day he died,” he sings on the opening title track. “Spirit rose a meter then stepped aside. Somebody else took his place and then bravely cried, ‘I’m a blackstar.’”

To contribute artwork to the Bowie Blow Out Tribute Art Show, contact Sullivan on the event’s Facebook page or bring your submission to her studio space, 1825 NW 28th St.

Blackstar, David Bowie’s 25th studio album, was released to the masses Jan. 8, his 69th birthday. Two days later, the art universe lost a bright star to cancer in a struggle that few knew about.

While early reviews were positive, any Blackstar critique loses critical weight without the context of the real-life events surrounding the artist who envisioned it. Right?

Even in the dark void of outer space, stripped of any idea about Bowie or his identity, this album stands alone as one of the most ambitious and direct artistic explorations into man’s mortality.

In most cases, the beauty in art is that consumers obtain its meaning based on their own emotional experiences. But Blackstar is so immensely personal and self-referencing — with its coincidences too striking — to consider the project in any realm not directly related to the seemingly predestined fate of its creator.

Since Bowie’s death, countless people have pored over Blackstar’s lyrics. A post-mortem review of his final words is at best eerie and at worst crushing.

Bowie’s deep, unnatural breaths are audible on the opening title track. Likely done on purpose, his singing is less refined on his farewell release; its cracks and coarseness bring the Starman down to Earth.

The first line of chilling, saxophone-driven “Lazarus” was written by Bowie’s flesh-and-bone hand, but it sings from a spiritual realm: “Look up here; I’m in heaven.” On “Dollar Days,” he’s literally “dying to” rectify life’s regrets, wondering if he squeezed every drop of joy from his time on Earth.

There also are hints of Bowie’s waning strength. In “Girl Loves Me,” time and regularity begin to slip. “Where the fuck did Monday go?” Bowie asks between chains of slang. (He died on a Sunday.)

Blackstar’s tremendous experimental jazz aesthetic drives home the artist’s goodbye. Enough can’t be said about a musician, of that age especially, who is comfortable making music far ahead of the time his or her career began and as he stares down his own mortality.

Blackstar’s closing track, “I Can’t Give Away Everything,” confirms that Bowie accepted the reality of his looming physical departure. Over driving drums and a sample from 1977’s “A New Career in A New Town,” he leaves us with his last words, lyrics of contemplation and resolve.

“Seeing more and feeling less; saying no but meaning yes. This is all I ever meant; that’s the message that I sent.”

Print headline: The flame, A David Bowie art tribute show builds momentum, even as organizers work to secure a venue.