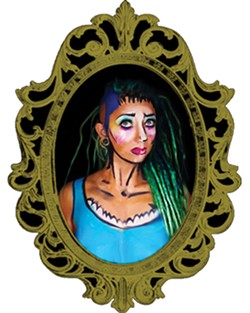 Ever wonder what would happen if someone force-fed you the red pill that put you into the Matrix?

Local art stars Holli Would and Chase Vegas have brought such a scenario to deliciously twisted life with Wonderland Asylum, their live stage recreation of Lewis Carroll’s classic book Alice’s Adventures in Wonderland.

“We came up with this idea and story and wrote it all down,” said Would. “Then we convinced these other freaks to do it.”

Alice (Would) winds up in a mental institution after killing her cat, Dinah. After a round of mandatory medication, Alice takes a trip in her mind through a psychedelic world of wonder and horror, guided by the White Rabbit (Vegas), a fellow patient.

The tale develops as the pair is subjected to old-fashioned remedies for mental illness, including straitjackets and electric shock therapy. Eventually, they encounter the asylum’s warden and her corrupt group of guards.

“Wonderland is all [Alice’s] hallucinations that unfold,” said Would of the story. “She gets really high and sees acrobats, but shit gets real when she comes back down.”

Would’s experiences with live art theater took her up and down the California coast between San Francisco and San Diego over a three-year span. She said her ideas of envelope-pushing live theater in one of America’s most progressive cities were actually not as exciting or racy there as they are in Oklahoma.

“They already have more artistic freedom,” said Would of her fellow performers in San Francisco. “Performances in California were tame compared to what my friends are doing here.”

She also said the climax scene — where the “shit gets real” — would be even too racy for San Francisco’s progressive tastes.

Due to the burlesque performance laws in Oklahoma that Vegas said have been in place since the ’20s, he and Would have had to scale back the degree of exposure in their production.

The laws have not discouraged the pair from staying true to their production ideas.