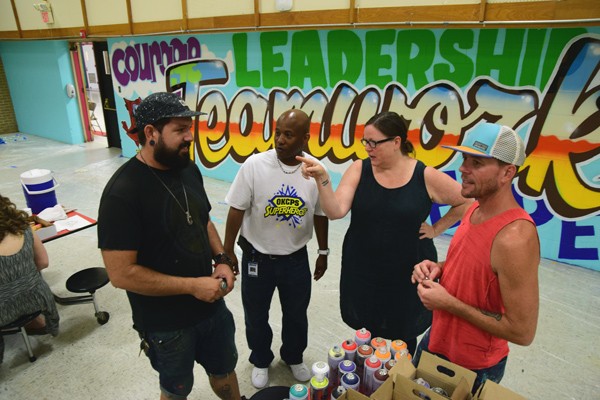 The enchantingly named cafetorium at F.D. Moon Academy, 1301 NE 13th St., was bustling with industry early one Thursday morning. Doughnut boxes and painting supplies littered tables, and a slightly motley crew of arts activists, administrators and mural painters carried tarps and supplies purposefully from one place to another and paused to rest, admire their work and laugh with one another. They had been working all week, and the transformation was almost complete.

“When we first saw this space back in November, it was to attend a meeting. We were in the beginning stages of deciding what Current Studio was going to be, and we knew part of that was making a positive impact on neighborhoods. The meeting was about the Strong Neighborhoods Initiative (SNI) and its three areas of focus: Classen Ten Penn, where our studio is located, Classen’s North Highland Parked and Culbertson’s East Highland, which is where F.D. Moon is,” said Kelsey Karper, cofounder and co-curator of Current Studio. “We were sitting here thinking, ‘Wow. This space could be so much brighter.’ It was so dark and uninspiring and didn’t feel right for elementary school children. We knew we could make it better.”

Karper and Current Studio co-founder Romy Owens talked to artists, the school’s art teachers, Shannon Entz at SNI and F.D. Moon principal Warren Pete about the project. They decided they wanted to keep the inspirational words that were already on the walls and combine them with ideas from the students themselves.

“I cried when I saw what they’re doing here,” Pete said. “I couldn’t believe so many people would take so much time. I know the effect this will have on the students. The words on the walls are the words we live by. We know that the students could easily be lost with all of the terrible things happening in the world, so we let them know that they can change the world. We model kindness and respect so that they learn those attributes.”

Pete has been the principal at Moon for four years, and he used to be vice principal at John Marshall High School. He’s an Oklahoma City native who returned home after college at Northeastern State University in Tahlequah.

“I went into education because it was where I saw the most opportunity to give back,” Pete said. “I had many job offers to leave, but I want to be a part of the growth and excellence happening in Oklahoma City.”

The painting project has been a team effort. Volunteer corps from Boeing came in en masse and primed the walls. They even donated the paint. Then volunteer artists came in to work their magic with more donated paint, this time from Anchor Paint. Although all of the artists had been happy to donate their time, one of them, Tanner Frady, was recently and unexpectedly compensated for an old debt and decided to use those funds to pay each artist a small honorarium.

Frady’s company, Frady Cat Signs, painted the word at the center of one of the larger murals: courage. It’s a bold word executed boldly. The letters are rendered in three-foot tall, chrome script.

Frady and partner Ashley Dawn knew they wanted to be a part of the project the moment they received Owens’ email.

“Right away, I had the idea to do one big word,” Frady said. “It’s done in spray paint, in a chrome effect. The piece is done from top to bottom; you work your way down.”

“Basically, it is a lot of color-blocking and a lot of fading,” she said. “You do the outline last.”

The children at F.D. Moon spend hours in the space each day, having lunch, attending assemblies and working on performances and projects.

“We work on theater performances in here, and on our Black History Month performance. We also hold programs in here like National Tie Day, where we teach all of the young men at F.D. Moon how to properly tie a tie, both a regular tie and a bow tie,” Pete said. “For our young ladies, we have a program called Moon Girls Rock, which is also in here. For that day, we put all the boys on the other side of the building and focus on our young women, helping them learn to be young ladies.”

Pete knows that he won’t see the fruits of his labor until his students are older, perhaps not even until they graduate from high school and go on to college, but he knows he’s influencing their future.

“Moon is a wonderful place to be. We love our kids, our parents and our community,” he said. “We are a change agent of Oklahoma City.”