When Daniel Helm, one of the founders of Oklahoma City print shop Cheap Rent, was trying to come up with a name, he knew they didn’t want a stereotypically Okie title like Prairie Grass Gallery. Instead, he found resonance when an acquaintance asked him, “Why do you still live in Oklahoma?”

Cheap Rent’s original spot was a rent-free shed, and the name just kind of took on a life of its own.

Working with fellow artists Melissa Gray and Tate James, Cheap Rent collaborates with other local artists, placing their art on affordable T-shirts, creating a kind of exhibit that one can wear, like a traveling DIY underground art show.

Located primarily on the web at cheaprent.co, what separates it from other local clothing ventures is it treats each T-shirt release as though it’s part of an art opening, coordinating “art parties” for each new line. The inaugural party, held last December, garnered the upstarts quite a bit of notice and featured music from Peyton Green and Matt Robertson, among others.

In addition to shirts, artists are also welcome to sell prints, comics or zines at these events. Helm believes these parties do more because they “celebrate people’s work as artists and making cool shit happen.”

“I would say we kind of have a cross-market for people who like stylized art,” Helm said. “We have shirts, we have sweatshirts … our artists’ material ranges from a girl shaving her head to witty sayings with colorful, bold artwork.”

Its current line features art from Garrett Young, Olivia Gibb and Melissa Gray. Each shirt retails for $20 and is created using eco-friendly inks and printing processes, something Cheap Rent is adamant about.

Helm is happy with the response Cheap Rent’s line of shirts has received and he is planning its next batch of wearable art. But until then, he’s just happy to continue making the metro look a little more stylish.

“At the end of the day, if you’re into buying T-shirts and wearing T-shirts, buy ones that look cool and support people in their local area trying to do cool things,” Helm said. “Support it. If you want good things to be happening around you, then you have to pay the tax for it to happen.” 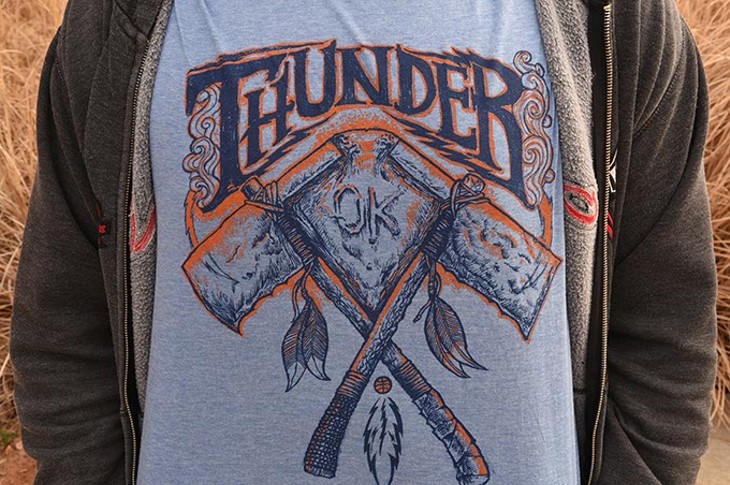 Much like Helm, John Hart, owner and operator of Cerebellum Art, only makes the types of shirts he would actually wear himself. He’s best known for his unique take on Oklahoma’s love for the Oklahoma City Thunder, but T-shirt design and screen-printing weren’t his first loves; they were something he happened to fall into.

Hart graduated with a degree in graphic design and found a screen-printing job out of college. From there, he learned all aspects of the industry.

It has paid off for Hart, as his T-shirt designs — available mostly in small art boutiques such as DNA Galleries, 1709 NW 16th St., and Stash, 412 E. Main St., in Norman or online at cerebellum.storenvy.com — have become underground cult wearables, mixing OKC’s love of sports with a decidedly Okie-punk feel that takes the Thunder’s patented name and logo to new and varying extremes.

“I think that’s why there is a huge market for these underground shirts, because they are speaking to the community and the impersonal Thunder shirt isn’t,” Hart said. “It’s all about breaking the inflexibility of having to use the official logo to craft something more Oklahoma-inspired.”

In 2004, Cerebellum took on more of a political tone (Hart describes himself as being “three shades from anarchist”) but found the constant “preaching to the choir” both draining and ineffective. Even though many might consider him using his talents to promote a multi-million-dollar sports team to be somewhat of a sell-out move, Hart actually believes that what Cerebellum does is just as subversive and visceral as when it began.

“You know how Warhol got into commercialism and added a new angle to his art? I feel very much that this is what Cerebellum does, creating wearable art that’s not specifically meant to be mass-produced and there you go,” Hart said.

Working around the clock to not only keep Cerebellum’s current shirt selection in stock but also come up with new looks and ideas for 2015, Hart believes that the metro’s old-school printers carry on an age-old Oklahoma tradition of working with their hands and preserving a form of printing that, thanks to modern mass-producing technology, is always on the verge of going extinct.

“We’ve had an industrious ingenuity in Oklahoma for a long time,” Hart said. “It’s important to keep these things visceral and alive because it really does speak to the unique perspective of our state. Our ingenuity and our handmade goods really speak volumes about Oklahoma. It’s just another way we put ourselves on the spot.”

Print headline: Print-à-porter, Local artists move from the canvas to the T-shirt.