“I can’t imagine what it would be like to be homeless, especially during this time of the year,” she said.

With 10 colorful wrapping paper prints each designed by a local artist, The Curbside Chronicle hopes it has found a new way to support those attempting to transition out of homelessness.

Ranya O’Connor is director of The Curbside Chronicle, which prints a magazine produced and sold by homeless in the city as an alternative to typical panhandling. O’Connor said some other publications like theirs around the country have tried their own wrapping paper campaigns, which is where Curbside got the idea.

Individuals, in addition to 25 different brick-and-mortar retailers around the metro, will be selling two- to three-foot sheets of the paper for $8 throughout December. Magazines will continue to be printed and sold during that time. 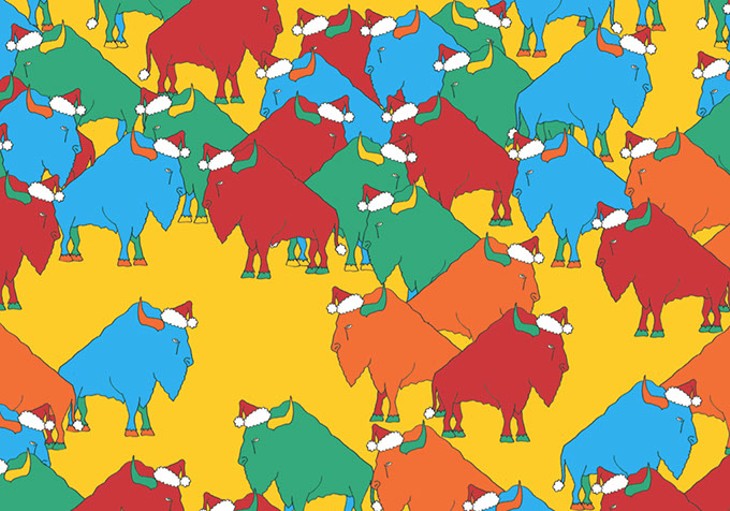 O’Connor said for the most part, artists were given complete artistic freedom in their designs.

“I think it’s way cooler than anything you could buy at Target or Dollar General,” she said.

Though she enjoyed and appreciated all of the artists’ works, she said one of her favorites was the design by Hill, which uses nutcrackers as a way of honoring the long history of homeless veterans.

Robinson said she was honored to be able to work on the project and be included in the talented group of local artists. Her design features a woodsy, wintery scene with wildlife native to Oklahoma.

“I can’t imagine what it would be like to be homeless, especially during this time of the year,” she said. “I am always looking for a tangible way to help people in need. With this project, I was able to do that and give other people the same opportunity.”

“For me, animals can be a good analogy conveying people’s wants and needs,” he said. “‘Everybody needs a home,’ is the idea that all creatures need and deserve a place to live, whether it’s the shell of a turtle or a gold fish bowl. People are no different.”

O’Connor said all money from sales by individual vendors around Oklahoma City will go to The Curbside Chronicle for things like housing, food and other necessities. Money from wrapping paper sales made at participating stores goes to support programming expenses, like vendor uniforms and publication costs, at the Chronicle.

The Wrap Up Homelessness campaign marks the first time the Chronicle has sold anything other than its publication. O’Connor said she is open to trying other campaigns like this one.

“I think this is the first of many,” she said. “I think we’ll stick with publishing the magazine full-time, but we would like to look into a few seasonal offerings every year.”

For more information about the campaign, including a list of participating retailers, visit wrapuphomelessness.com.