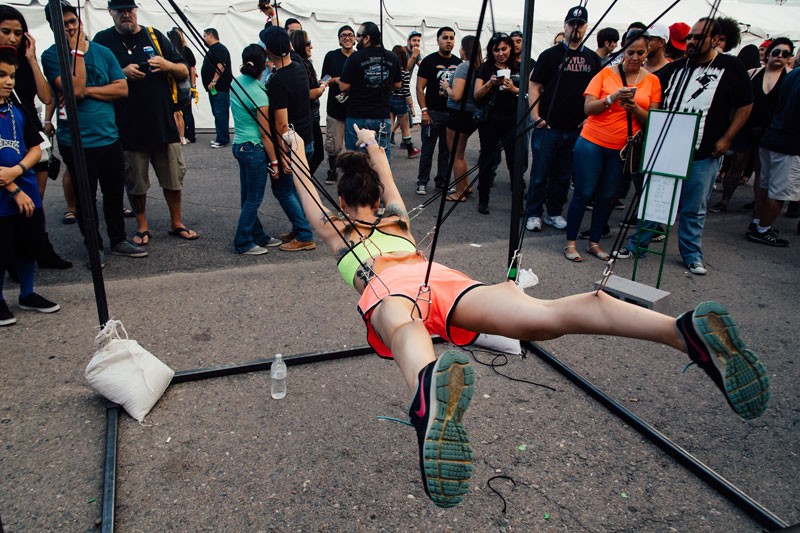 It started for Joey “Danger” Covey when he was 7 years old and pierced his own ear. He kept doing it at home, ignoring the blood and pain, to the point that his mother gave in, took him to a shopping mall jewelry store and had his ear professionally pierced.

“I think she thought, ‘Alright; you’re done now, right? This is just a phase, right?’” he said.

He wasn’t finished, though — not even a little bit.

Covey, now 33 years old and covered in tattoos and piercings, is a member of a tight-knit, passionate and eccentric troop of body suspension artists in Oklahoma City. They pierce themselves several times with needles up to as thick as a pencil and thread what look like industrial-strength hooks through the piercing holes. Then they hang from the hooks using a complex system of cables hung from a steel frame, sometimes suspended half an hour or longer.

Completely sober and willing, they’re inflicting enough pain on themselves to undergo a mind-altering experience they said is only understood once encountered.

New Year’s Eve, Covey performs a live suspension as part of SB Body Arts’ Battle of the Gods art show and celebration, which starts at 7 p.m. at the tattoo and piercing studio, 6717 N. May Ave. The free show for guests age 21 and up features artwork for sale from local artists as well as complimentary food and drinks.

Although the group performs suspensions as often as twice a month at conventions and events around the country, Battle of the Gods is a rare local performance.

SB Body Arts shopowner and suspension team organizer Dustin Mathis hopes the show gives people who might have only heard about suspension or seen it on TV a chance to experience it. Most of the group’s performances are at piercing and tattoo industry conventions, where such displays are not outside the norm.

But despite the obvious pain and bleeding, Mathis said, the show isn’t about shock or gore at all.

“A lot of people may look at it and think it’s the most excruciating thing in the world,” Mathis said. “When you watch someone [suspending] and they conquer that goal, it’s like a big weight has been lifted off their shoulder. … It’s art. It takes away the graphic and the fear and turns it into a beautiful experience.”

Suspension, with roots in some Native American cultures, typically attracts people interested in a more extreme version of tattoos and piercings. But for some of the participants, it’s more than just a radical act of body modification. It’s part therapy and part public display of spiritual artwork as performers experience and embrace the pain.

“It’s kind of like a psychedelic drug,” Covey said. “You can’t really explain the experience, but you won’t view the world in the same way afterwards. You’ll always see it different. Some people go their entire lives without experiencing that.”

Covey admitted the pain can be brutal. His body is typically sore for days following a suspension. Once, he said, he felt it “up to [his] ears” after a more extreme performance in which he also swung from ropes while suspended.

Covey said the adrenaline and mental clarity from the experience makes it worth it. Giving into the pain and accepting it is what he refers to as “flying.”

“Once you fly, your mind crosses over,” Covey said. “It’s a peaceful experience. If you can do that, you can carry it with you forever. Life doesn’t seem as hard anymore.”

Several people involved in suspension treat it almost like therapy. Mathis first experimented and embraced it while processing pain during a divorce.

Watching a suspension and the full range of human emotions has brought his wife, Stephanie Mathis, to tears. She co-owns SB Body Arts with Dustin Mathis and does first aid for the team that prepares for one person’s suspension, which involves sterilizing equipment, setting up cords and preparing the staging area. Unlike Dustin Mathis and his team of suspension artists, she has no interest in participating in body suspension, even though she appreciates it.

“It can be beautiful to watch and to experience to see the person work through pain or able to connect with whatever they’re trying to work through in life,” she said. “You get to see how powerful your body is and how much people can naturally withstand. Your skin can take a lot more than you think.”

Battle of the Gods Art Show