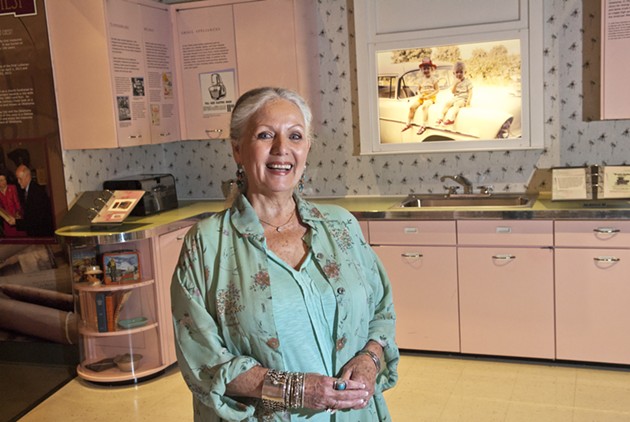 Loretta Oden is a treasure. She has a wealth of information about native foods, native peoples and Oklahoma’s cultural food life since before natives’ contact with Europeans.

Oden grew up with the rich traditions of her mother and grandmother as part of Citizen Potawatomi Nation. Like most young people, she took it for granted. She eventually moved to Oklahoma City, where she raised her children. She then moved to Santa Fe, New Mexico, where she opened the Corn Dance Cafe, which specialized in indigenous New Mexican foods prepared in traditional ways.

Her experiences paved the way for future possibilities.

“I spent about three years traveling the U.S., researching this country’s food history, and then this bulb came on,” she said.

She looked around America, especially at native peoples, and realized how little its citizens know about their own food history.

Oden, a chef, feels that food is the best way to understand a culture. Now she calls what she does “have knives, will travel.” She travels extensively and works with tribes across the U.S., helping them incorporate traditions into individual lifestyles and larger projects.

These days, her home is in OKC, and she has recently started work on a project with the Oklahoma Historical Society (OHS).

Dr. Bob Blackburn, director of OHS, is building the largest exhibit in the history of the Oklahoma History Center. It will open Nov. 16, 2015, Statehood Day for Oklahoma and the 10-year anniversary of OHS. The exhibit will focus on commerce in Oklahoma, starting in 1719 with French traders in the Mississippi valley and going through the 2008 purchase of the Thunder basketball team.

“It’s a history of free enterprise in Oklahoma, and it’s probably the most ambitious project yet,” he said.

Tentatively titled Crossroads of Commerce: The Free Enterprise History of Oklahoma, it will be huge both physically and in the amount of subject matter. Blackburn enlisted Oden and her encyclopedic knowledge.

“I have always admired her command, and I finally found a good fit for her,” Blackburn said. “We have a real asset in Loretta.”

Oden said she was immediately on board with the project and, of course, brought her own perspective to the table.

“I told Dr. Blackburn that commerce doesn’t happen without food. That’s going to be the common thread that runs through all commerce in Oklahoma,” she said.

The two are developing a series of three-minute videos to generate interest and, hopefully, funding. Oden will focus on native Oklahoma food culture from before contact with settlers to the melting pot that middle America is today. They will cover native foods and those that have become attached to different groups as they settled here.

“I like to talk about what I call ‘cultural baggage,’” Blackburn said. “The way we talk and the way we eat are both examples of ‘baggage’ that people brought with them to our culture.”

The emphasis in the exhibit is of a shared history — how people connect because of what they have in common.

“We started with buffalo. We thought that would be intriguing to the audience. We did a kick-ass buffalo chili in a jalapeño bread bowl,” Oden said of the first video in the series.

You can’t help but walk away hungry after a conversation with Oden. No matter the topic, it will naturally come around to eating and food. She knows that food is the thing that ties people together. It was only natural that Oden saw the potential in this series and the future exhibit. Future episodes are planned for locations around the state.

“We have all of these great little truck stops. It’s going to be great fun. In fact, we have some footage of Pawnee Bill’s roadside attraction, places that have their roots in Oklahoma,” she said.

The possibilities are endless, and the implications are clear. Oden’s biggest challenge is only having three minutes.

“Once you get me talking, sometimes I can’t be stopped,” she said.

She is brimming with ideas about food, health and the future of our great state. Anthropologists point out that a motivating factor in people is resources, and there is no simpler example than food. Food is the thing we all share.

“I think the most civilized place in the world is the dinner table,” Oden said.

Local chef Loretta Oden cooks up a special recipe of Oklahoma history with a tantalizing exhibit and video series about our food and its origins.