The pickings were slim in the pantry of The Homeless Alliance’s WestTown Resource Center and Day Shelter as The Coach House chef Kurt Fleischfresser began planning the next day’s lunch.

“Do you have onions and peppers?”

“We got onions. Don’t know about peppers.”

The pickings were slim in the pantry of The Homeless Alliance’s WestTown Resource Center and Day Shelter as The Coach House chef Kurt Fleischfresser began planning the next day’s lunch. He was the first contestant in the Turning the Table on Hunger challenge, in which Oklahoma City chefs prepare a meal for everyone at the shelter using only donated ingredients.

It’s a challenge faced daily by shelter cooks across the country, including chef Johnny Wofford and Delbert Briggs, who prepare two meals a day, five days a week for more than 250 people.

“It’s like Chopped every day,” said Briggs, who also often spends his afternoons driving around, collecting food donations. “We’ve got no clue what we’re going to get day-to-day.”

The idea came from Clayton Bahr, who helps with The Homeless Alliance’s Turkey Tango event on Thanksgiving Day each year. While several individuals give their time and resources around the holidays, the shelter feeds people every week.

“I’m lucky enough to have contact with several local chefs through my work as a wine rep,” he said.

But how would these classically trained culinary wizards fare without access to fresh vegetables, a limited supply of meat and a refrigerator full of day-old donuts from Krispy Kreme? 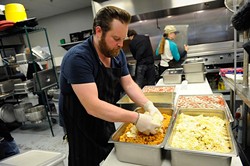 Fleischfresser arrived at 8 a.m. March 23 to start planning as Wofford and Briggs showed him the kitchen. In the storage area is a hodgepodge of different products, including bottles of Sunny D, cans of beans and plenty of boxes featuring the word “instant.”

In addition to cooking 10 meals a week, Wofford packs 50 care boxes to send with families to keep them fed over the weekend. Into those, they usually add individual products and foods they don’t have enough of to feed a large crowd.

Emerging from the refrigerator, Fleischfresser announced that tomorrow’s lunch would be pepperoni chicken pasta — an old favorite from his days at now-defunct Portobello’s — with fresh salad and lemon curd bread pudding.

“First thing out of the chute, I was happy to find such a clean, organized kitchen,” he said. “I appreciate (Wofford’s) challenge. I think having a fresh eye come in once in a while can help. Maybe they’ll incorporate some of what we did that day into their dishes. I hope we can get more people in to help.”

A who’s who of local cuisine arrived on the morning of March 24. 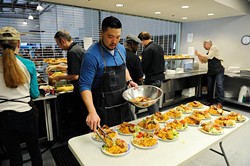 “They usually start lining up 10 or 15 minutes early, but not this far back,” she said. “It ties into their food insecurity. If it’s going to be good, they’re worried it’ll run out before they get to the front of the line.”

It’s not just about the ingredients, Phelps said.

Adding a regular slate of kitchen volunteers would be a tremendous boost to the shelter, but that requires people who are willing to commit their time.

Wofford added that more volunteers — and a steady supply of fresh foods — would be revolutionary. Even simple staples, like real butter, would make everything easier.

Right now, the menu centers largely on what is shelf-stable or items that can be frozen and saved, like turkey and gravy over rice and beans and cornbread.

Finding proteins can sometimes be as difficult as putting vegetables on the plate, Wofford said.

For everyone involved in Turning the Table on Hunger, the challenge is about bringing people together using one thing that crosses every line in society: food.

This time around, the meal was a success, according to diner Eric Bricker, who said he usually comes to the shelter for lunch.

“This is the best food I’ve ever had here,” he said. “I wish we had more variety, more real vegetables — fresh, not just from a can.”

Following Fleischfresser is a tough act in any restaurant, but in April, Johnson will lead the Turning the Table challenge.

“It’s going to be hard but fun,” he said. “In the meantime, I want to talk to Johnny (Wofford) about what kinds of stuff they need donated. Maybe we can get a few more small appliances in here.”

Those interested in making a donation to WestTown can go through The Homeless alliance. Volunteers are needed for breakfast and lunch Monday through Friday and can register through the United Way of Central Oklahoma’s Volunteer Center. learn more at volunteercentraloklahoma.org. You can also reach The Homeless alliance at 415-8410 and homelessalliance.org.

Print headline: Food, security, love, WestTown visitors find all three thanks to local chefs and the Turning the Table on Hunger challenge.

Those interested in making a donation to WestTown can go through The Homeless alliance. Volunteers are needed for breakfast and lunch Monday through Friday and can register through the United Way of Central Oklahoma’s Volunteer Center. learn more at volunteercentraloklahoma.org. You can also reach The Homeless alliance at 415-8410 and homelessalliance.org.