As Oklahoma City transitions into the cooler weather, what’s available to eat locally — and what we crave — changes. 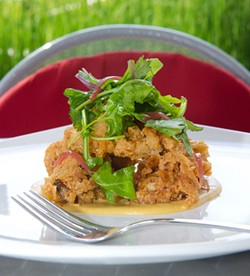 As Oklahoma City transitions into the cooler weather, what’s available to eat locally — and what we crave — changes. We want heartier, spicier, more substantial fare.

While modern refrigeration and technology make it easier to eat whatever you desire year-round, there are benefits to eating in tune with nature’s design. It’s more affordable, for one. Even if all of your produce comes from the corner big-box grocer, you will see a seasonal reflection in price due to costs associated with shipping and growing out-of-season items.

Also, eating seasonally means eating produce at its peak freshness. It both tastes better and is better for you. Peak freshness means peak nutrient levels.

Oklahoma Gazette talked with local chefs who are showcasing the transition to fall in their menus. 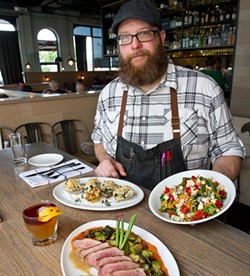 New menu items also include fried Brussels sprouts, ancho-coffee crusted ribeye and apple cake with a maple-bourbon crème Anglaise. “We’ll also be running plenty of delicious braised meat features on the board this month,” he said.

AT HOME, McKenna likes to spice things up, too.

When McKenna cooks at home, which he admits is not as often as he would like, this time of year, he always craves stick-to-your-ribs chili.

“I like to play around with different meats such as turkey and venison,” he said.

He doesn’t have a particular recipe, but his advice is to make certain you brown the meat well, with the onions in the pan. “The caramelizing of the meat makes the chili have a greater depth of flavor,” he said.

He also recommends a book, Chili Nation, by Jane and Michael Stern. In the book, each state is represented by a different take on the hearty classic. Oklahoma’s representative is “16-Times World Champion Sirloin Chili,” by bull rider Jim Shoulders. Find it above.

AT WORK, Kamala Gamble has a slightly different perspective on seasonal fare, as she’s a chef and a producer.

She works alongside chef Barbara Mock, and they share an intimate relationship with Oklahoma’s strange growing seasons. Gamble described the growing year in detail. The highlight? It was, as always, a funky year.

“We’re having one of the driest Augusts on record, which is atypical — every season [here] is atypical,” she said.

She’s now harvesting the last of her summer vegetable crop, including okra, tomatoes and peppers, and because she grows organically, there are concerns she has that don’t always impact larger, commercial farmers.

For Gamble, insect activity is a major concern — squash vine borers wiped out her crop. Insects also got her pumpkins, but she has accepted it as part of the cost of growing locally.

Even so, she also has a lot of success.

“We’ve probably got about 12-15 types of greens, and it was another great year for cucumbers. Armenian cucumbers, I have great luck with them, and they never get bitter,” she said.

AT HOME, Gamble and Mock enjoy this time of year and work with all the produce that’s available.

They pair the flavors that linger in the late summer with some of the hearty greens to make unique salads and soups.

They suggested a salad and soup combo with interesting flavors. It’s light, yet filling enough to be perfect for cooler months.

Brush squash with olive oil and roast at 350 for about an hour, until soft. When done, let cool enough to handle it.

While cooking squash, shred ginger with a food processor or grater.

Place ginger and water in pot and bring to a boil. Once boiling, remove from heat and cover.

In a blender, combine 1/3 of the ginger water, 1/3 of the chicken stock and 1/3 of the squash flesh and blend until smooth.

Strain through a fine mesh strainer into a soup pot.

Repeat process until all squash, ginger water and chicken stock are in pot. 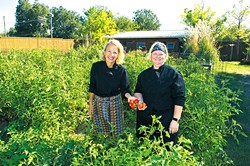 Cook farro according to package directions, and when tender, drain.

Drizzle squash with olive oil, salt and pepper on a parchment-lined baking sheet.

Roast squash at 350 degrees for 30 minutes until tender.

While cooking squash, cut greens off beets and simmer in water over medium heat until fork tender, let drain and cool. When beets are cool, peel and cut to a medium dice.

Mix dressing with farro, then add squash, beets and parsley, lightly folding together. Serve or refrigerate for up to a day.

“The feeling of being in a restaurant, warm and being waited on, when it is cold outside makes dining out so much fun,” Sexton said.

Plans for his Scratch menu include shifting the sauce on the hand-made gnocchi to a brown butter and sage sauce to make it a “transition dish.”

“Our kitchen is also perfecting a coconut curry & butternut squash soup that will be vegetarian,” he said.

Since everything at Scratch is made on the premises from premium ingredients, things can change on a dime dependent on whim or availability. Make sure you check back often, as during this time of year, there’s plenty to keep things interesting.

AT HOME, Sexton has ideas for seasonal home cooking, too. Sexton, much many busy chefs, doesn’t get to spend as much time at home as he would like.

“The trees changing and the cooler weather make it so much fun to be outside and grill out. This fall I will play with a lot of mushroom steaks, marinated in something just spicy enough that the kids can handle it,” he said.

Sexton said he experiments a lot with wilted salads, and since greens are aplenty right now, he generously shared his recipe for a hearty meal, rich in protein and leafy greens. Plus, it’s easy to create.

Set aside while you prepare the bison to top your salad.

Sauté bison on medium high until it is just browned.

Add curry sauce, once sauce is hot, add broccoli crowns and sauté until softened, but not without crunch.

While the meat is still very hot, top salad with bison and broccoli mixture, serve family style in one large bowl.

Print headline: Season's eating, Cooler temperatures signal changes to local produce and what we — and area chefs — crave as we slide into the new season.