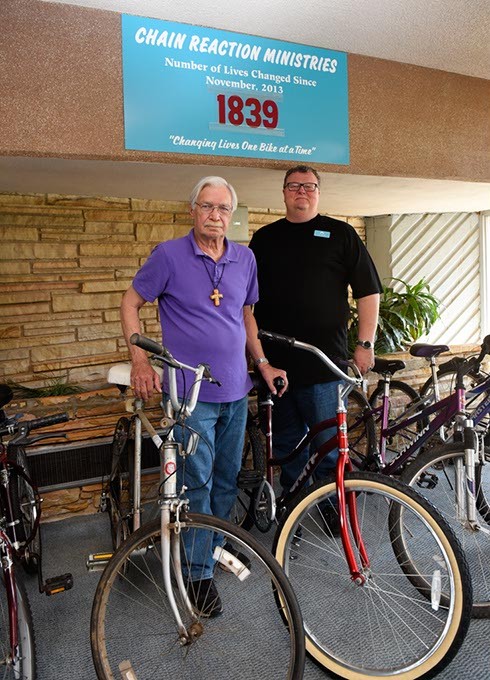 The big, white egg of a church on Northwest 36th Street and Walker Avenue is not just a 126-year-old architectural landmark; it is also home to a very important Oklahoma City charity. Restoration Church at the Dome (formerly First Christian Church), a Disciples of Christ congregation, also runs Chain Reaction Ministries.

The nonprofit repairs bicycles and gives them to homeless people in the community so they will have reliable transportation to and from work.

Since its inception in 2013, the Oklahoma City branch has given away over 1,800 bicycles. Chain Reaction Ministries (CRM) donates bikes mainly through referrals from other homeless support agencies. The Department of Veterans Affairs, The Curbside Chronicle and Homeless Alliance are a few of the organizations coordinator Larry Batten and founder Rev. John Malget regularly hear from.

“We’ve become the transportation wing for many agencies,” Malget said.

He brought CRM to OKC after serving at the original Houston branch for over three years. Malget saw a need here due to the city’s lack of a strong public transportation system. Local church elders were surprised to find he was right; Oklahoma City has since surpassed the success of the other ministries in Bentonville, Arkansas; Baton Rouge, Louisiana; and Houston, Texas.

“When I got here, I had the bicycle ministry in the back of my head,” he said, “but the whole idea of outreach is: What is a need here in Oklahoma City that is not being met?”

He found his answer by simply looking around the city.

Because of his experience in Houston, Malget had modest expectations for CRM when it launched here. Houston’s homeless population is more than four times larger than OKC’s, with comparable square miles of land, but it gives away considerably fewer bikes per year.

“His goal, when we started this, was 100 bikes a year,” Batten explained. “That’s what Houston was doing. Our first year, we blew Houston away.”

Organizers couldn’t have predicted the extent of the need in OKC.

He went on to attribute the difference to Houston’s better public transportation system.

He also talked about how the CRM church in Houston is not in the easiest location for people who need transportation to get to.

The Federal Transit Administration honored it for effective grant management, as well.

One night route runs from Reno and MacArthur avenues through uptown, Midtown and OU Medical Center. All service ends at midnight. As an example of OKC’s need, Malget explained that a nighttime warehouse job might not be located near that night route. Or the shift might start or end after midnight.

Restoration Church at the Dome has a full-time custodian who started working at the bike shop to pay it forward, Malget said. He volunteered in the shop four nights a week. He also  worked temporary night jobs and lived in a tent.

Many people who receive bikes from CRM express gratitude and a commitment to continue improving their lives. On a large bulletin board posted in the church, Malget and Batten proudly display numerous thank-you letters.

One recipient wrote to say he uses the bike to get to work and that he’s looking for a second job since he knows he can now arrive on time. All CRM bike mechanics have been recipients but one. They said they feel touched by the ministry and want to help continue the program.

“I guarantee you, most people in this city are two paychecks from being homeless, and that’s the truth,” Battan said.