Local closed-circuit TV show cheers up children in the hospital 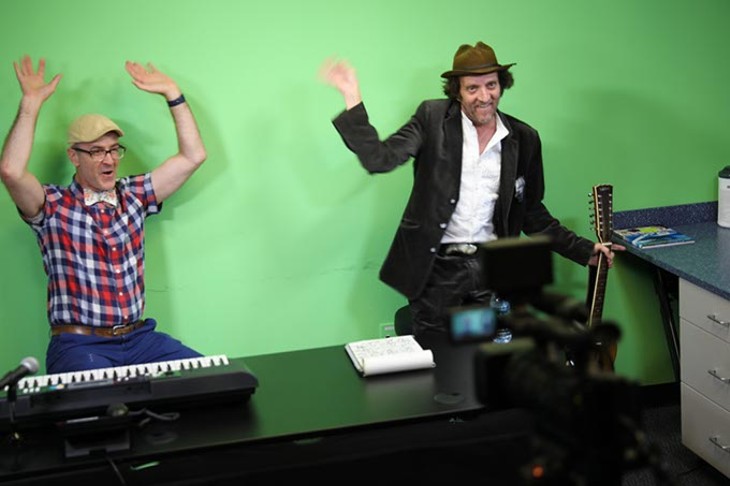 As unlikely as it might sound, a closed-circuit television program filmed inside a children’s hospital often gets better music bookings than many of Oklahoma City’s venues.

The show brings in new guest hosts nearly every week. While many of them are known local performers, Wiggle Out Loud sometimes invites in doctors, nurses and other hospital staff members to sit, laugh and wiggle alongside Wiser.

Many performers are easily lured into an appearance because it is a fun and unique opportunity. A lot of people dream of appearing on a show like Sesame Street or Mister Rogers’ Neighborhood. Wiggle Out Loud is a chance to turn those dreams into reality.

“I was more nervous doing this than doing most [stage gigs],” Meade said after a recent guest appearance.

Wiser mainly draws from his pool of musician friends and contacts when setting up a guest appearance, but he also makes an active attempt to branch out and connect with a diverse group of performers. Working with a new guest host is as fun for Wiser as appearing on the show is for invited musicians.

“Some weeks, something has happened and the co-host can’t be here, so I’ve had to do it alone,” he said. “That’s fine, but it’s a lot more fun with them, especially with different personalities coming in.”

Wiser plays keys and sings for Sugar Free Allstars. His bandmate is drummer Rob “Dr. Rock” Martin. The band started out as a bar/club rock group but transitioned to “kindie rock” — music that merges age-appropriate themes with indie rock styles that can be enjoyed by the whole family — in 2007.

Sugar Free Allstars found greater success in its new format than it could have ever imagined playing for adults. The band won a 2012 Grammy Award for its contribution to the children’s album All About Bullies…Big and Small. The act has played with Oklahoma City Philharmonic and tours nationally when it can.

It’s currently celebrating its 10th anniversary as a kindie rock band with a free tour of shows across the OKC’s Metropolitan Library System.

Wiggle Out Loud TV came to be shortly after Sugar Free Allstars began working with The Children’s Hospital Volunteers to help put on its annual Wiggle Out Loud festival, a free, family-friendly music fest slated to make its return Sept. 17 on Myriad Botanical Gardens’ Great Lawn. In working with the nonprofit group, Wiser learned they wanted to start producing their own music show. He soon offered his services as host.

To an extent, the show is still evolving, but a few features have come to define each episode. Wiser banters back and forth and plays music with the episode’s co-host while, ideally, interacting with callers. In the vein of Pee-wee’s Playhouse, Wiser or the guest host introduces a Word of the Day, and everyone on camera must wiggle every time it is mentioned.

“We play some songs, we tell some jokes and try to get kids to tell better jokes,” Wiser said. “We show a video and ask kids to call in about that.”

“There’s a lot of the same things — just the silliness,” he said. “I tell the co-host, ‘This is what you’re doing,’ but the bottom line is you’re just there to be silly.”

Unlike recording live TV on a widely broadcast station, there is less pressure involved in each new episode of Wiggle Out Loud inside the hospital’s on-site recording studio. The show does not need to start right on the dot at 1 p.m. and could end a little early if needed. If Wiser or a guest host is unable to come in, they can skip a week. The host said he recently missed a show because he had a slight cold.

“We have to be super careful,” he said. “You could have a little tickle or cough that you could do anything else with, but here (at The Children’s Hospital), you have to stay home.”

Music programs like this exist at some other children’s hospitals around the country. While other places might have a trained staff and high-end equipment to produce their episodes, The Children’s Hospital operates its programming with more limited resources. Technical glitches and malfunctions are bound to occur and must sometimes be dealt with on-air.

“My team is total novices,” said Sara Jacobson, executive director of Children’s Hospital Volunteers. “Some hospitals have whole programs and technicians and studio producers. We are bare-bones.”

Wiser said he has sometimes knocked off his mic during the episode or the camera might run out of battery mid-show.

Mistakes happen on occasion, but the show runs very smoothly, all things considered. Wiser puts his all into each episode.

“It’s public-access TV chic,” he said. “We just need a couple of ferns on either side.”

Jacobson said the hospital tries hard to engage the children there, but there are a lot of factors that go into participation.

“Every day is really, really different in terms of if you want to participate in social activity or if you’re not really feeling it,” she said. “Sometimes people just got some really bummer news. We always try to make sure people understand you’re meeting kids where they are and they might be in a really tough spot.”

Ideally, children are not staying at the hospital for multiple weeks at a time. That means Wiggle Out Loud must play to an ever-changing audience. Some weeks, they might be flooded with callers and have kids walk into the studio to participate. Other weeks, they might not hear from much of anyone.

Jacobson said the goal of Wiggle Out Loud TV and other Children’s Hospital programs is to show youth staying at the hospital that they are not in a scary place. When a child sees one of their doctors having fun on TV and not wearing a white jacket, it can brighten their perspective.

“That normalizes people,” Jacobson said. “It makes the kids think, ‘Oh, you don’t live here and you’re not going to poke me. You actually have a sweet guitar.’”