Oklahoma Republicans are at no risk of losing power of the Legislature this November, in part because of a lack of Democratic challengers and electoral math that remains stacked in the GOP’s favor. 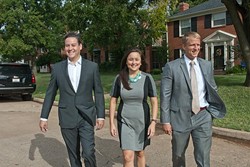 Oklahoma Republicans are at no risk of losing power of the Legislature this November, in part because of a lack of Democratic challengers and electoral math that remains stacked in the GOP’s favor.

While winning any of the statewide seats (governor and superintendent, among others) might be viewed as the biggest potential victory for Democrats, a more realistic achievement might be found in a handful of districts in the inner-ring suburban communities of Oklahoma City.

Between the bright red of the suburbs and the deep blue of the inner city, there might be just enough purple for Democrats to have a shot.

“I think there are many voters who are flippable,” Collin Walke, a Democratic candidate in House District 87, said about his ability to sway some Republicans to vote for him in November.

District 87, which includes portions of northwest OKC, is a seat Democrats have come close to winning in recent years. The Democratic candidate received 46 percent of the vote in 2004, followed by 48 percent in 2006 and 49 percent in 2008. Rep. Jason Nelson, the current Republican holding the seat, won reelection in 2010 and 2012 by about 10 points each time, widening the distance between the parties. But Walke says history shows the seat is up for grabs.

“Education is the No. 1 issue for people [in the district],” Walke said. “I think it’s something I have been able to relate to a lot of voters on.”

Nelson is no stranger to education. He has authored or helped support bills aimed at school choice, education savings accounts and local control of curriculum. Viewed as one of the more policy-minded legislators, Nelson also helped spearhead reforms of the Department of Human Services.

However, Walke believes the growing dissatisfaction with education policy in Oklahoma plays to his advantage, including the recent announcement that the Legislature’s repeal of Common Core, which was supported by Nelson, has cost the state its No Child Left Behind waiver.

“Even though many [voters] may not like Common Core, they are realizing the results of not thinking two steps ahead,” Walke said. “Voters want reasonable solutions that they aren’t currently getting.”

Nelson has downplayed the impact the loss of the waiver will mean for the state and said his support of Common Core repeal shows he is in lockstep with his constituents.

“What I did see [this year] was a lot of energy on the part of teachers and parents against Common Core and to get rid of it,” Nelson said. “I think it actually gives me an advantage because it shows that I have been responsive to the will of the voters.”

In House District 85, which sits just north of District 87, challenger Cyndi Munson is looking to not only take the seat from Republicans but from the Dank family that has represented this northwest OKC district for 20 years. Represented by the late Odilia Dank from 1994 to 2006, her husband, Rep. David Dank, won the seat in 2006 by less than one percent. However, since that narrow victory, Dank has increased his margin each election and, in 2012, won the seat without a challenger.

Name recognition and six-figure funding might make Dank hard to beat, but Munson believes there are plenty of voters in the district who are ready for a change.

“Residents [in District 87] are phasing out and new ones are coming in, like me,” said Munson, who has called the district home for three years. “Dank is an established name, but there are a lot of new residents.”

While Districts 85 and 87 feature young Democrats challenging multiple winning incumbents, Senate District 40, another northwest OKC district that includes portions of both 85 and 87, features two new candidates. Republican Ervin Yen advanced past a June primary and August runoff, and John Handy Edwards was the lone Democrat to file. Senate District 40 appears even more Republican than either House District 85 or 87, but recent redistricting has added some Democratic-leaning precincts — even if it also added a few Republican ones.

“The conventional wisdom is it’s a Republican-leaning district,” Edwards said. “I could have the underdog tone because of the big money and big power that has lined up behind him. However, we are going into the general election with about the same amount of money.”

Yen has raised nearly a quarter million dollars, double that of Edwards. But Yen has also spent a lot in his primary battle, and the two candidates enter the fall with similar levels of campaign funds (Yen: $82,000, Edwards: $66,000), according to August campaign finance reports.

Yen has been backed by dozens of political action committees, a fact Edwards says will limit Yen’s ability to legislate independently if elected.

“If Yen is elected, he will be another Republican lost in a sea of Republicans,” Edwards said. “It’s good to have a counteractive voice in there. We should talk about ideas. We should see what the best choice for Oklahoma is.”

District 40 has trended more Democratic over the past 20 years, but Republicans have never experienced a real threat of losing the seat. Republican Brooks Douglas was elected in 1994 with 70 percent of the vote and won reelection unopposed in 1998. Sen. Cliff Branan, who reaches term limits this year, won election in 2002 and 2006 by at least nine points and was unopposed in 2010.

State Democratic leaders have said over the past few years that the party’s path back to strength will most likely come from the changing urban districts of OKC and Tulsa as suburban and rural districts have turned even redder in recent years. A win in either House District 85 or 87 or Senate District 40 would not only validate that belief but also steal a seat from Republicans.

On the flipside, a Republican victory, especially a sweep of the three seats, would further solidify the party’s strength in northwest OKC and show that, while the region might be trending more Democratic, it isn’t ready to turn blue.