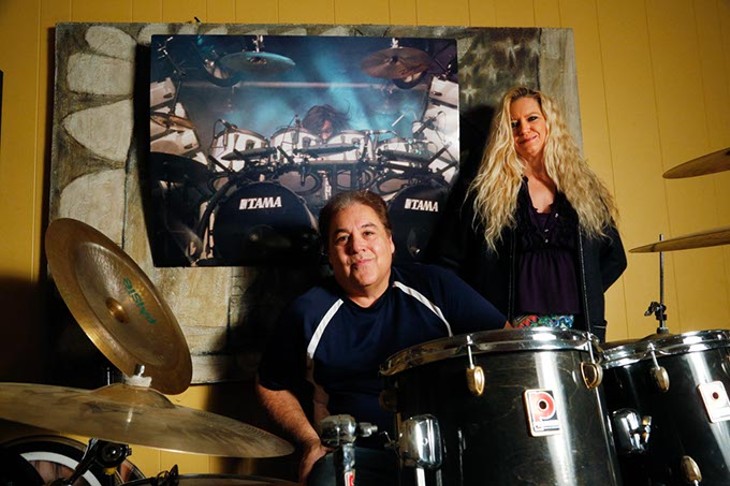 The late Randy Castillo is best remembered for his 10-year run as the drummer for Ozzy Osbourne from 1986 to 1993; he is also credited as a co-writer on such classic albums as No Rest for the Wicked and No More Tears.

Michael Bell knew and admired Castillo, and he has been showing the documentary he produced, The Life, Blood and Rhythm of Randy Castillo, at festivals over the last year.

Though he now lives in Oklahoma City, Bell grew up in Wichita, Kansas, where he first heard about touring cover band The Wumblies. It played live versions of deep tracks — just like better FM rock radio stations played at the time — by Led Zeppelin, Jethro Tull, Slade, Yes, Black Sabbath and others.

Armed with fake IDs, Bell and two of his drummer friends saw the band play live, and it changed the way they approached their own musicianship.

“We were 16; we should have been 18 to get in,” Bell said. “Back in the ’70s, you had to go see live music; there was no YouTube [and] there was no VHS to rewind and see what the drummer did. If you wanted to emulate a move, you had to go to the show and memorize it.

“After we saw Randy, he changed our drumming prowess at 16. We were just in awe of this soon-to-be rock star.”

Bell found he was not alone. His documentary is filled with musicians — like Kip Winger of Winger and Billy Sheehan of Mr. Big, Niacin and The Winery Dogs — talking about how influential Castillo’s performances with The Wumblies were to them.

“The same experience happened to a young [Kip] Winger in Denver,” Bell said. “In the movie, he says, ‘This was our band. They were the coolest and hippest band.’”

Bell moved to Los Angeles with a band in 1981. There, he reconnected with Castillo, who was playing in a band called Code Blue.

“He was starving out there, like so many musicians were. I remember going to his apartment to buy some cymbal stands he wasn’t using, and he gave me a drum lesson,” Bell said. “I always marveled at how fast his foot was — he could play triplets with one foot, just by the way he used his foot on the pedal.”

Bell said Castillo joined the Stone Fury band, which was on MTV, and then he joined Lita Ford in 1984.

“We remained friends; we would touch base,” he said. “When Ozzy would come through, we would try to meet up.”

After his period with Ozzy, Castillo’s final project was replacing Tommy Lee in Mötley Crüe on the band’s 2000 album New Tattoo, when Lee was going through marital and legal problems that landed him in jail.

“In the movie, Nikki Sixx says they called and asked him who he wanted on drums; they were going to make a list of 10 guys,” Bell said.

“Nikki said fine and called Randy down and — without auditioning him — hired him on the spot,” Bell said. “Remember, Mötley Crüe and Ozzy went to Russia together in 1989, so they knew Randy and they watched each other play from the side of the stages. As Matt Sorum [Guns N’ Roses, Velvet Revolver] would tell you, Randy had a huge reputation. In LA, Randy was ‘The Guy.’”

Unfortunately, Castillo became sick before the launch of the tour to support the album, and the band had to replace him with Samantha Maloney (Hole, Eagles of Death Metal).

Castillo had a duodenal ulcer that ruptured in his stomach and underwent emergency surgery. While recovering, a small lump was discovered in his cheek and he soon was diagnosed with squamous cell carcinoma. The cancer went into remission in mid-2001 but soon returned. The musician died March 26, 2002. He was 51 years old.

After his funeral, Bell talked to Castillo’s sister, who was interested in someone making a documentary about the drummer’s life. Bell had taken some film courses in college, so he grabbed a camera and, with film co-producer Maria Runyon assisting him, contacted the managers of every group associated with Castillo that came through the Oklahoma/Texas region. His interview subjects were a who’s-who of metal and featured everyone mentioned above, along with Slash, Lemmy Kilmister, Sammy Hagar, Zakk Wylde, Bill Ward, Jerry Cantrell and others. Lita Ford narrates the project.

Castillo was of Spanish, French, Native American and Hispanic origin, and Bell said Castillo connected noticeably with spirituality in life and while facing death.

“There was something about him that drew in everybody, whether it was his humanity, his drumming prowess, his stick tricks — he made an impression on everybody,” Bell said.

The documentary’s bonus footage includes an interview with Athena Lee, Tommy Lee’s sister and ex-wife of James Kottak of the Scorpions. She also is a drummer.

“She talked about the two of them having cancer at the same time at Cedars-Sinai hospital and how Randy helped her through her breast cancer while he was dying,” Bell said.

When he thinks about his friend, who he saw as a teacher, he said the main thing he remembers is that he practiced constantly.

“Practice; he encouraged people to practice,” Bell said. “When we asked how he could throw a drumstick in the air and catch it on time for the beat, he would say, ‘Practice.’ He was always on top of other drummers [to] keep practicing, keep drumming, even if it’s only for 10 minutes a day.”

Bell is currently looking for a distributor for his film and continues to show The Life, Blood and Rhythm of Randy Castillo at festivals in tribute to one of metal’s most formidable and inspiring drummers.

Learn more about the project at randycastillomovie.com.