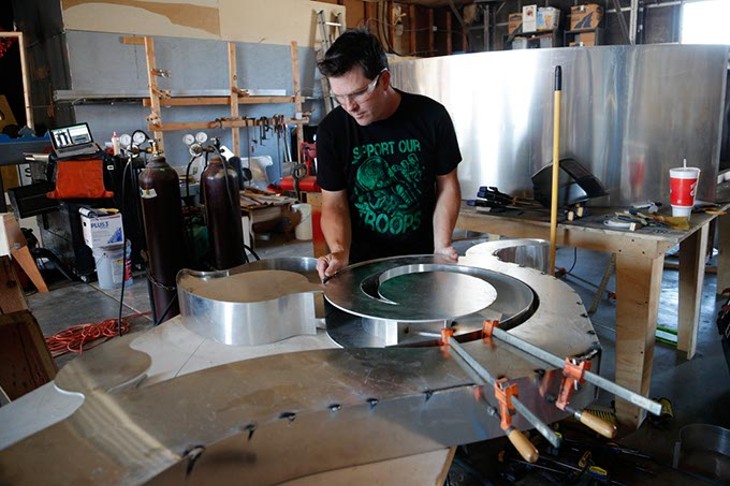 If they answer “making art,” you know they are already rich and famous (they’re not), or they have another job that alleviates the hustle that passes as a lifestyle for full-timers. These people have health insurance. They eat whenever they feel like it. Most of their mothers are still proud of them.

If they answer “paying rent,” you know they either don’t care about money (they do), or they lack the inclination to separate their career from who they are. Hugh Meade is one of those guys.

The 45-year-old, South Carolina-born Oklahoma City resident has worked as a fabrication artist out of his Oddfab Design Lab, 703 W. Sheridan Ave., for nearly three years.

The explosion of new restaurants, architecture firms and condos created a bubble market for signmakers, and Meade’s indelible thumbprint is seen across OKC’s landscape.

The Mule, Oak & Ore, Hudsucker Legal Group, Empire Slice House and The Haven apartments all have his signs. And his large-scale metalwork is in demand at events from the Oklahoma History Center to Myriad Botanical Gardens.

Despite his success, however, Meade said the stress from being a working artist wore him smooth.

“You just have to expend so much mental energy on surviving,” he said. “I’m sure that inevitably takes away from the creative process, because you’re just tired.”

Many important things in life necessitate having a job, be it insurance or something as simple as a schedule. It takes a toll after awhile to fight that system from the outside, he said.

Although he still spends evenings and weekends at Oddfab, Meade recently took a job as a project manager for local fabrication company PremiereCraft, Inc.

He’s quick to acknowledge his good fortune in finding work that lets him hone his craft, but said one of the biggest benefits is the emotional load it’s sloughed from his shoulders.

It is a relief for Meade to know when and how much he will be paid, and that he has insurance and a schedule.

“It’s not like I took a job doing something I hate,” he said. “This was pretty much a best-case scenario if I had to stop being in business for myself.”

Perhaps that sense of relief is what freed him up to find his most creative way to pay rent. Meade’s newest sculpture, “Intersection Point Zero,” a 10-foot-tall, ethereal archway made of steel and aluminum, became a collaborative experiment in financing public art.

A private collector in Carrizozo, New Mexico, read an article about Meade’s handiwork and commissioned a piece. Instead of the normal back-and-forth bartering and negotiation sessions, he said the deal they struck felt more like a revelation.

“What I saw in this was an opportunity to make public art,” said Meade. “Regrettably … financing large-scale work is obviously the biggest roadblock to creating it.”

The collector wanted to display Meade’s work on his property as a type of tourist attraction. They worked out a deal that enabled the collector to buy the piece, display it, then sell it and share profits with Meade.

The piece itself is a lovely, curved and shimmering overlap of archways that Meade hopes will border on interactive.

“It represents the meeting point between the logical and the mystical; how they have to work together,” he said. “There’s something about the shape underneath that creates a kind of portal of experience, and hopefully, people will actually want to go stand in that intersection.”

Meade said it wouldn’t exist without the collaboration of a patron.

“He’s made a direct investment in me and my work,” he said. “And honestly, I like it better that he’s invested in its worth rather than buying it outright. I’d like for artists and patrons to think creatively about how to create art together.”

It hurts, taking off the merit badge society gives an artist for being gainfully employed, but not nearly as much as putting it back on. And every busted transmission or unexpected trip to the emergency room can make one start to feel more like a heavyweight waning in the 10th round. Their mantra changes from “keep punching” to “keep standing,” which is something Meade is figuring out how to do while shedding blood for his art and not because of it.