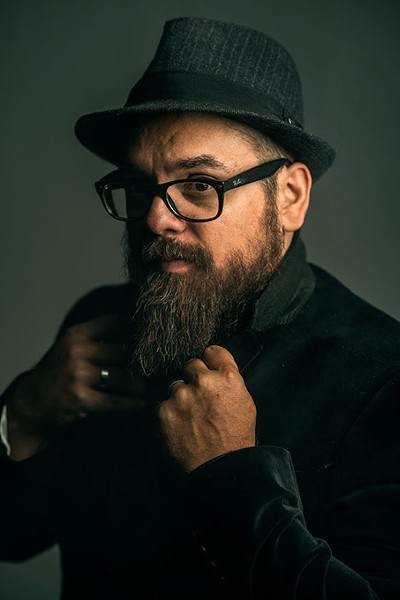 Oklahoma filmmaker Shawn Barfield is over feature-length films. Why limit storytelling to one 90-minute chunk?

In the World of the Long Breath is a noir-fantasy film project informed by the binge-watch era. The series is in pre-production, but Barfield hopes to have a 15-minute pilot ready by August or September, depending on funding. His ultimate goal is to have the series picked up by a cable network or streaming service.

Yes, it is a vampire story, but it’s no Twilight. Barfield favors a darker and more stylistic telling rooted in Albanian folkloric tradition.

“I’m reinventing the concept of a vampire,” he said. “Doing some research on it, vampire myths came from an older myth known as shtriga.”

The pilot follows photographer and artist Tom, who comes across a big, dark secret online and becomes a target of a mysterious group.

Eventually, Tom finds himself trapped by nine shtriga vampires. He escapes and passes what he learned to Owen Westwood, the main character of the series. It is a classic setup inspired by The X-Files. Viewers are drawn into the mystery in the first five minutes before meeting the characters.

Barfield said Long Breath is inspired by elements from The X-Files, Lost and 1994 film The Crow.

The filmmaker said he plans to begin shooting the pilot by late July. Local actors, including Adam Hampton of Outsider Productions, Laurie Cummings, Edna Garcia and singer-songwriter Ashley Getz, have been selected.

The art department will be the focus of the project’s estimated $6,000 budget. Barfield said art and traditional special effects carried the great films of the ’80s.

“A lot of the filmmakers right now, all of the focus is on technology — this camera or this equipment or this drone,” he said. “There’s all this focus on the technology and it’s like there’s this loss of the art department.”

He hopes a shift from a technological viewpoint will help the series stand out and further emphasize the storytelling.

“We want to create new conventions and look at old conventions in terms of storytelling,” he said. “It is a darker, more mysterious, almost Twilight Zone type of feel.”

Barfield has always been interested in film. In high school, he and friends dabbled in multiple projects. Later, once he became exposed to the work of state filmmakers, he became serious about his craft.

His storytelling journey started in earnest about a decade ago at deadCenter Film Festival.

“Me and my wife kind of got a wild idea and said, ‘Hey, let’s go to a film festival; we’ve never done that,’” he said. “We checked it out, and we were both very interested in the fact that you could have local people putting together these projects.”

The event moved him so much that the following year, he submitted a short film. It was accepted.

Barfield lives in Elgin, near Lawton. However, he does most of his film work in Oklahoma City, where he has created around 200 music videos and commercials.

He received formal training at Oklahoma City Community College. Its digital cinema production program was new at the time, so he was a little skeptical about what the school could offer. Any doubts were quickly allayed.

“When I checked it out, I was just blown away,” he said. “It’s an incredible program, and I would consider it top 10 in the nation as far as film production goes.”

The equipment is professional-grade, and his teachers included Oscar-winning producer Gray Frederickson, known for Apocalypse Now and The Godfather film series. He said Frederickson still uses Barfield’s capstone project, Dancing in the Chamber, to teach his classes.

Barfield hopes all of his future narrative projects feature episodic work. Ideally, he would like to structure Long Breath like his favorite series, House of Cards, with 12 to 20 episodes per season.

He feels many viewers want more character development than feature films can offer.

“Everyone’s used to, ‘Hey, I want to spend more time than an hour and a half with these characters,’” he said. “All my projects now are geared toward providing that because one, the audience wants that now, and two, that creates two, three, five years of work right here in Oklahoma.”

Barfield has watched friends move to California to continue their film careers. He would rather stay in Oklahoma. He said he owes it to the people of the state.

“Peter Jackson, he made it happen in his area,” he said of the New Zealand director.

So did Texas-based director Robert Rodriguez.

“With the way technology is right now, you can make it happen anywhere,” he added.