“One is a safe place where gamers and geeks can go and everything is catered to them. The TVs won’t have sports on them, and things won’t get too rowdy.” 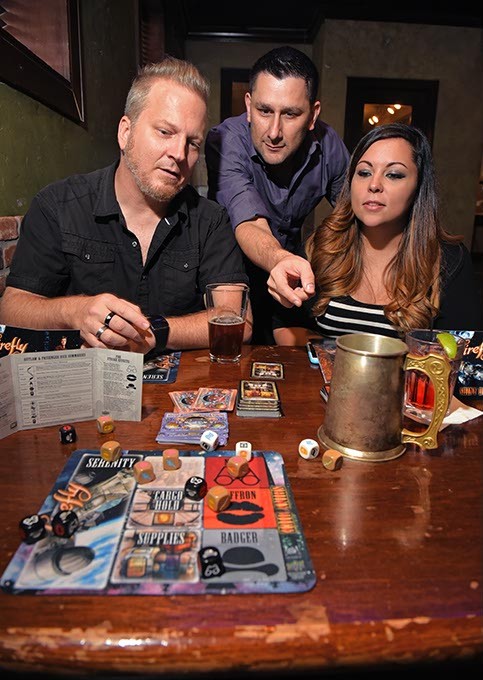 It was this eclectic blend, this bizarrely heterogeneous mix, that reunited adopted 20-year-old Anthony Vandyousefi with his birth mother and inspired him, with the help of some friends, to bring tabletop gaming to Oklahoma City in a big way.

Vandyousefi’s birth mother, Alice Beard, opted for adoption because she faced one of the harshest adversities of all: extreme poverty. She wanted a better life for her son, a life she had little chance of providing. Beard had a friend with a sister who was looking to adopt, and within a matter of days after his birth, Vandyousefi had a new home.

When Vandyousefi was 16, his mother slowly started telling him things about his birth mother and her family.

“This went on for two years. But I didn’t really care, per se. She was the one who raised me. She was my mom. It was interesting to hear, but it was nothing I had strong feelings about,” Vandyousefi said.

By then, Vandyousefi was a hard-core gamer, and at the age of 20, he was regularly attending gaming conventions. Not long before one of the conventions rolled into town, his mother told him that his biological mother’s name was Alice Beard. He recognized it instantly.

Beard was a concessionaire at the many gaming conventions Vandyousefi had attended since the age of 15. They’d gotten to know each other over the years, becoming good friends and spending time talking when the concession booth slowed down. At the next convention, Vandyousefi confronted her.

“She was deathly quiet. And this woman always had something to say. We’d known each other for five years or so and had no clue that we were related to each other,” Vandyousefi said. “We’d become great friends, saw each other every few months, and had no inkling that she was my mother and I was her son that she’d given up for adoption. The world of gaming reconnected me to my biological mother. … It was very surreal. I owe the world of gaming a debt, and that’s another reason I want to do this. It gave back to me. I want to give back to gamers.”

Vandyousefi, now 36, along with friends Johnnie and Layla Payne, wants to open a combination gaming retail store and restaurant, a haven for Oklahoma City gamers. Think of it as a Chili’s built out with sets taken from Game of Thrones, complete with drinks served in metal steins, serving wenches, a renaissance band and turkey legs served on metal plates with no silverware. The name Dragons and Flagons sums up the tavern atmosphere the trio is striving for.

“We’re envisioning several things all wrapped up into one,” Johnnie said. “One is a safe place where gamers and geeks can go and everything is catered to them. The TVs won’t have sports on them, and things won’t get too rowdy.”

Gamers at Dragons and Flagons also won’t have to deal with bullying or strange looks for playing a game in a public setting.

“Creating that safe place is big for us,” Johnnie said.

Non-gamers and families will be welcomed warmly, too. Thirty years ago, family game night was Life, Monopoly, Scrabble and other tried-and-true favorites. And those will be available at Dragons and Flagons, too. But the times have changed, and the games have changed with them. Now, Settlers of Catan might be the game of choice for a family. Never tried it? No worries. You can check it out from the restaurant’s library and a member of the staff will show you how to play.

“The second thing we want is a unique experience for non-gamers. There are a lot of people out there who aren’t gamers but like the themes that are involved in gaming. They like sci-fi. They like the medieval period. There are tons of Game of Thrones fans that have never thrown dice before, but they just like the idea of being in a dark tavern setting with some people dressed up, or maybe their waitress looks like a serving wench and they get to drink beer out of a big metal glass and eat a turkey leg with no silverware,” Johnnie said.

The three hope to open the eatery in northwest Oklahoma City by early 2016 and are in the process of determining a location.

Vandyousefi said that in addition to providing a refuge for gamers, he and the Paynes want families to interact without the divide often caused by technology.

“That’s one of the things we’re trying to bring back. It’s great that we’re targeting gamers, but we’re also targeting families in general, the families that come in just to try out the restaurant. And hey, while you’re here, why don’t you try this card game?” Vandyousefi said. “We want to bring back some of that social connection.”

Between the three of them, Vandyousefi and the Paynes have more than 60 years of gaming experience. They like to play, and they like to have fun. They said they will bring that spirit of fun to Dragons and Flagons and hope to prove that business and pleasure can coexist.

An October crowdfunding attempt to raise $40,000 on Kickstarter missed its mark, but they weren’t discouraged.

“Fear not; we have a plan B and are still shooting for an early 2016 opening,” they Tweeted to fans.

A group of local gamers plan to open an inclusive restaurant and gaming space in OKC.