A swing through Roughtail Brewing Company in Midwest City won’t end with the cash register ringing up a six-pack of its top high-point beer. 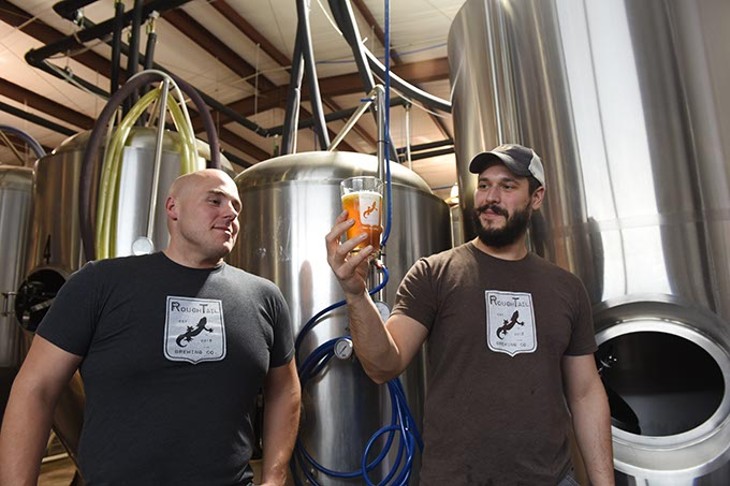 Visitors to Bedré Fine Chocolate Factory in Davis can buy a box of confections after their tour. A trip to Field’s Pies factory in Pauls Valley can end with the purchase of a famous pecan pie, and if an outing to the Braum’s Family Farm in Tuttle leaves you with a sweet tooth, a pint of ice cream is always for sale.

But a swing through Roughtail Brewing Company in Midwest City won’t end with the cash register ringing up a six-pack of its top high-point beer.

Oklahoma’s liquor laws restrict breweries from selling high-point beer, which is any drink with more than 3.2 percent alcohol per weight, on-site. For many craft breweries like Roughtail, high-point beers are signature products.

“For us not to be able to sell [high-point] beer here is like not being able to sell bread at a bakery,” Tielli said.

Earlier this year, a group of Oklahoma beer enthusiasts formed an advocacy group with a goal of changing that law.

“We thought this was something we can do to support local breweries,” said Kevin Hall, director of the League of Oklahomans for Change in Alcohol Laws (LOCAL).

Hall, who fell in love with craft beer and home brewing during his time at seminary school in Colorado, a state known for its craft beer scene, said coming back home to Oklahoma opened his eyes to the archaic laws related to alcohol.

As someone who enjoys visiting craft breweries in other states and has seen the tourism impact they have, fighting to allow breweries here to serve all of their products seemed like the best place to start.

“This will generate jobs and revenue in the state,” Hall said. “It’s about tourism [and] it’s about increasing the hospitality industry.”

LOCAL hosts Free the Taps fundraisers in Tulsa and Oklahoma City and wants to hire a lobbyist who can work with legislators to change the law. Hall realizes that it could take years achieve the desired outcome and he hopes his group can start the legislative process in 2015.

Grassroots efforts to change Oklahoma’s alcohol laws have sprouted before, but LOCAL draws inspiration from similar, successful groups in other states. In 2013, Free the Hops, a beer advocacy group in Alabama, helped pass a bill that legalized home brewing and shares similar goals with LOCAL when it comes to restrictions on small breweries.

As brewery growth explodes across the country, Hall believes that a local market that is friendlier to breweries will increase tax revenue, jobs and quality of life. United States Census numbers show that, since 2007, the number of U.S. breweries doubled to nearly 900 and revenue increased by 33.6 percent.

Tielli believes a change in the law would have an instant impact on his business.

“I would hire another person tomorrow,” Tielli said. “We’ve sold a ton of beer [to stores and bars], but we are barely keeping the lights on by doing that. It’s that taproom business that allows small breweries like us to survive.”

Changing alcohol laws here has been difficult. In 2011, the Legislature created a task force to consider changing a ban on high-point alcohol sales at grocery stores, but it disbanded after two meetings due to a lack of consensus among its members.

After the end of prohibition, Oklahoma remained a dry state for nearly 26 more years and liquor by the drink was illegal until 1985.

If successful, LOCAL might also advocate to change laws that restrict beer sales here, including a law that requires liquor stores to sell high-point beer at room temperature. As a result of that law, some brewers refuse to ship to Oklahoma because their products must remain refrigerated.

“If you have a bar and said you wanted to buy my beer I would say, ‘Great, but you have to contact your distributor,’” Tielli said.

Brewers like Tielli are hopeful that LOCAL will make an impact that they are unable to make on their own.

“If there is going to be change, it’s going to come from a group like [LOCAL],” Tielli said. “If brewery owners to go and try to talk to lawmakers, they are going to look at that as us trying to advance our own businesses. But when lawmakers see that there are a ton of people who are taxpayers, voters and citizens in their state that support this, that is a much different situation for them.”