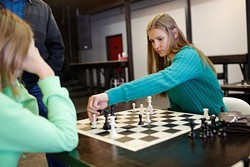 It’s 10:03 on a sunny Saturday morning in January, and the meeting room at District House coffee shop, located in the Plaza District, slowly fills with guests for the first meeting of a chess club for girls and women. One by one, they come in to play.

Some roll in with bed head, bleary-eyed but excited. Others stride in carrying chess boards in snazzy cases, wearing chess team T-shirts, hair coiffed, ready to roll. Coffee, cocoa and pastries are purchased, and players take their places across from one another.

Women in their 60s chat amicably as they sip and play. The youngest players are 6 years old.

Pretty soon, the chess girl arrives. Veronika Zilajeva is the highest-ranked female chess student in the state. She and her sister begin a game at a corner table. Zilajeva is tall and confident, a native of Latvia now living with her family in Moore, and she wants more girls to follow in her footsteps.

“I love chess,” she said. “You have to constantly challenge yourself while you’re playing.”

Zilajeva has been paying for 10 years, since she was in first grade.

This females-only chess club meets the last Saturday of each month and is the brainchild of mother, writer and chess devotee Rebecca Rutledge, whose son’s odyssey into the world of competitive chess spurred her own rediscovery of the game.

“I played competitively in my 30s, and my son loves to play,” she said. “I taught him when he was 3. When he was in first grade, he joined the chess club at Wilson Elementary.”

Rutledge took over the management of Wilson’s WISE Wolves Chess team and club in 2014 and has since brought in a coach. She also heads Youth Chess League of Central Oklahoma, which provides chess programming for the City of Oklahoma City’s recreational centers.

“Chess is really good for kids,” Rutledge said. “It increases cognitive ability and helps to proliferate dendrites, which means it makes the brain stronger and more efficient. It increases development of the prefrontal cortex.”

That makes it a perfect activity to get youths involved in before their teen years.

“Chess punishes impulsive moves and rewards thoughtful moves,” Rutledge said. “It’s not an everyone-gets-a-trophy game. It’s you against one person. One of you wins and one of you loses, and you learn to do both gracefully and to move on.” 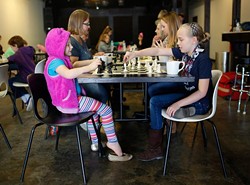 As Rutledge’s chess involvement grew, she noticed a glaring imbalance in who plays chess and who doesn’t and an inherent sexism in the organized world of chess, wherein being a Women’s Grand Master requires a lower ranking than a Grand Master.

“Before the ’60s, our choices were serial motherhood or celibacy. That wasn’t all that long ago. Those expectations about what women and girls can do or should do, they get passed down from generation to generation regardless of whether they’re relevant or not.

“Dolls aren’t for boys, trucks aren’t for girls and there aren’t any female grand masters. Except there are. Not many, but more than there used to be.

“With chess, there’s an opportunity to broaden those expectations —not society’s expectations of what a girl could or should aspire to achieve or become, but our girls’ own expectations, how they see themselves.” 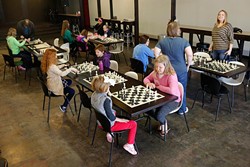 Kathryn Aliotta is a teacher and chess coach at Del City High School. She has played the board game since she was a second-grader in Michigan, thanks to her grade school’s librarian, Mr. Dykstra, whom she remembers with a nostalgic smile.

This morning, Aliotta brought one of her two chess-playing daughters to the event, while she, like many teachers, went to work at a second job.

“At Del City, we’ve got about 20 students in our chess club and six to eight who compete,” Aliotta said. “It’s been five or six years since we’ve had a girl in a tournament.”

The educator in Aliotta shares Rutledge’s conviction that chess is excellent for young minds.

“Chess teaches kids to think about consequences, make a plan and to be able to change that plan if it doesn’t work the way they thought it would,” Aliotta said. “It is a game where there is no luck; it’s completely about skill.”

She worries about the underrepresentation of girls in chess and the passive demeanor she sees in young women.

“I’m concerned about the attitude of our girls — they really lack self-confidence. I’ll see a girl, a strong player, do pretty well, and she’ll say she’s no good. A male player in the very same position, who may have less natural talent, will immediately talk about what a good player he is,” Aliotta said. “I don’t know if we don’t give girls enough self-confidence or if we raise them not to want to compete with boys, but I want to see it change.”

For her part, Zilajeva, 16, said she doesn’t really care if she’s playing boys or girls, and her quiet, polite confidence is a thing of beauty.

She and her sister are accomplished players. Zilajeva also plays basketball. She’s considering pursuing an engineering degree in college and wants to keep playing chess.

“I want to make sure that the younger generation plays, as well,” she said. “I want to increase the popularity of chess in Oklahoma. I want it to be as popular as basketball.”

“Society doesn’t expect you to play chess if you’re a girl,” Rutledge said. “Often, I’ll see a girl at a tournament and she’s not participating; she’s only there because her brother is playing, so she’s reading a book or playing on her mom’s phone, whatever. Maybe she gave chess a try and it wasn’t her thing, or maybe she doesn’t play because nobody expected her to.”

Low expectations for girls might inhibit them from participating, but there are challenges for girls who play, too.

“As for the girl who does play, the world is going to reinforce the notion that she’s different, that she’s doing something they don’t expect. Some adult will find out she plays competitive chess and go, ‘Oh, really?’ like they’re thinking, ‘That’s so cute!’ I get it all the time,” Rutledge said. “I run chess programs, I take my team to tournaments, I organize and promote chess events, and still people are surprised when they see me playing. Not just men; women, too. So yes, it’s sexist, but it’s everybody.”

The US Chess Federation appointed a women’s committee to address some of these issues.

“The first meeting was in December,” Rutledge said. “Not much came out of the meeting, but it was nice of them to have it. This is where I got the idea to start this club.”

Print Headline: Open game, No longer pawns of the patriarchy, a local group launches a women- and girls-only chess club.

Note: Guests can bring their own chess pieces or use the club’s.