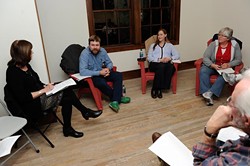 When Mike and Debra Luther talked about the idea of cohousing with their friends, it was always an interesting conversation about living together in a communal setting. Nonetheless, when the couple pitched the concept as a realistic idea, none of their friends joined them.

“It was something we had fun talking about,” Mike said. “But I guess it wasn’t something they took too seriously.”

Finding a deeper sense of community is a popular concept today as urban living continues to grow in popularity and younger residents seek housing that encourages neighborly interaction. However, the cohousing idea takes that concept further by clustering homes together in a way that encourages interaction, including development and use of common areas.

Looking to find more people serious about cohousing, Mike and Debra came across Josh and Sherry Buss, who also were in search of cohousing supporters.

“We live in Moore, and there are just normal houses on our street where everyone just pulls into their garages and is done at the end of the day,” Josh said. “We are interested in a community where we know our neighbors in an intentional way.”

Josh helped organize a group to discuss the concept and develop a plan. Mike and Debra, along with dozens of others interested in the concept, have met regularly for several months.

“Cohousing is a community of people who, from the beginning, make all the decisions about what their community is going to be like,” Josh said. “In all cohousing communities, the design intentionally encourages interaction among residents.”

Josh has become a point person with the group, but one key characteristic of cohousing is no one resident is in charge.

“We talked at the meetings about how important it was not to have a leader,” Sherry said. “We also discuss bylaws and how you are going to handle everything moving forward.” 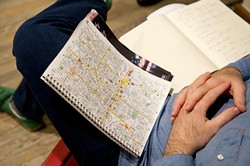 ‘A lot of interest’

The Cohousing Association of the United States (CAUS) reports there are hundreds of cohousing groups across the country. The closest one is in Stillwater. The Oakcreek Cohousing Community opened three years ago and consists mainly of senior residents.

The CAUS offers six characteristics of cohousing — including details on ownership, leadership structure and core values — that Josh said his group is looking to follow.

“Each home is privately owned and can be bought and sold just like any house, but community members share ownership of communal land,” Josh said. “It’s still up in the air as to whether it would be in an urban or rural setting, but we will be in the metro.”

Josh said meetings are open to people with any level of interest. In 2015, he hopes to settle on details related to a timeline and structure.

“At this point, we don’t have a large enough group of people who are really committed to cover the financial aspects or the decision-making part,” Josh said.

It took Oakcreek three years to launch, but Josh and Sherry said that could be an ambitious timeline.

“This isn’t a typical neighborhood or home. There is just a lot more that goes into it,” Sherry said.

Meetings take place on the second Monday of each month from 6:30 to 8 p.m. at SixTwelve, 612 NW 29th St. Josh said anyone interested in learning more can attend or contact him at cohousingokc@gmail.com.

“We are still early in this process,” Josh said. “But there is a lot of interest.”

1. Participatory process: Future residents participate in the design of the community so it meets their needs.

2. Neighborhood design: The physical layout and orientation of the buildings (the site plan) encourage a sense of community.

4. Resident management: Residents manage their own cohousing communities and perform much of the work required to maintain the property.

5. Non-hierarchical structure and decision-making: Leadership roles naturally exist in cohousing communities; however, no one person (or persons) has authority over others.

6. No shared community economy: The community is not a source of income for its members.

Source: Published by the Cohousing Association of the United States