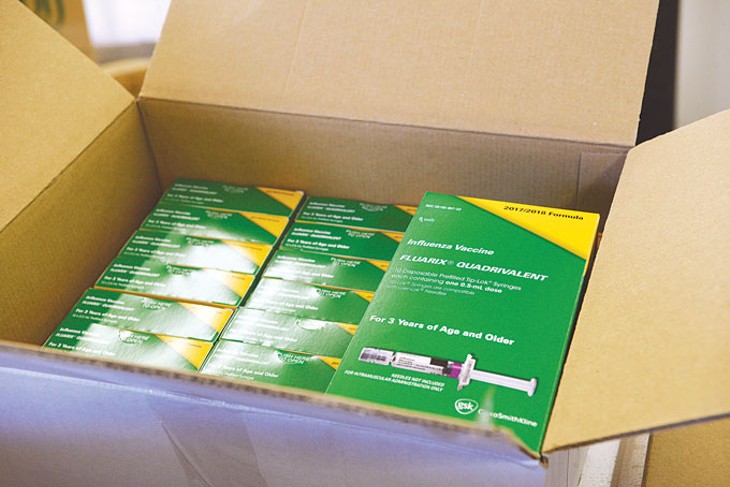 The day before Oklahoma City-County Health Department held a free drive-through flu shot day during which nearly 500 doses of injectable vaccine were distributed from a parking lot at Remington Park, Gary Cox, OCCHD executive director, explained flu infection rates were still rising with the season only about halfway through.

At the end of January, more than 2,500 Oklahomans were hospitalized for the flu and 92 died. By the time the flu season ended in 2017, 115 Oklahomans had died. The season typically begins as early as October and November and can continue into May.

So far this year, the flu has claimed eight lives in Oklahoma County with three reported during the fourth week of January.

Cox, along with other local, state and national health officials, has been encouraging everyone to get vaccinated. Despite the vaccine’s mediocre protection, it’s the best protection from the respiratory illness caused by a virus sweeping the area and other parts of the country, he said.

Across town, at a pharmacy near the corner of SW 119th Street and S. Western Avenue, pharmacists and staff greet flu sufferers young and old. Chris Phillips, pharmacist and owner of Chris’ Express Drug, explained this flu season seems sicker than past. He believes the increased foot traffic for flu medications into his pharmacy is because of the weakened vaccine. However, he does recommend the flu shot to his patients.

In addition to the vaccine, Phillips and his staff fill prescriptions for flu antiviral medicine. In late January, when Phillips heard that nearby pharmacies were running out of the drug Tamiflu, which is a treatment for the flu, his pharmacy responded. As a compounding pharmacy, pharmacists took the capsule form of Tamiflu and made it into a liquid, creating medication children could take.

“I realized there was going to be a weekend where little ones who couldn’t swallow a pill wouldn’t get flu medicine,” said Phillips, who took to the pharmacy’s Facebook page to inform customers of their supplies. “When I saw the response on Saturday, I knew that Sunday, we would have to open for a small amount of time for those that were desperate for it.”

Across the country, flu hospitalization rates are the highest ever seen at this point in the season, according to The Centers for Disease Control and Prevention (CDC), which began their tracking in 2005.

The Oklahoma State Department of Health is reporting similar findings when it comes to hospitalizations, according to Kendra Dougherty, the state’s influenza surveillance coordinator.

“We are just now at a plateau or at the peak of our flu season,” Dougherty said. “Historically, you usually have half of the hospitalizations on the back of a season. We could still see flu into May. As of right now, we’ve seen over 2,500 hospitalizations. We still have a lot of flu season left. It is definitely not too late to get a flu shot.”

While flu symptoms vary from person to person, the most common symptoms are fever, cough, sore throat, runny or stuffy nose, muscle or body aches, headaches, fatigue, vomiting and diarrhea, according to the CDC.

To avoid the flu, there is a vaccine, which is recommended for everyone 6 months of age and older. While no flu vaccine is ever perfect, the vaccination can reduce illness and prevent flu-related hospitalizations, the CDC reports.

“It’s high-risk individuals that really benefit from the flu shot as well as the people around them,” Dougherty said. “It provides a layer of immunity around those high-risk individuals, which are those 5 years of age and younger, people over the age of 65, pregnant women and people with underlying medical issues, especially lung or heart.”

This year’s flu vaccine has been criticized as national news agencies have speculated the vaccine is ineffective. CDC officials have not reported estimates of the vaccine’s effectiveness yet; however, the agency reports that flu vaccines have lower effectiveness against H3N2 viruses than other flu viruses.

Aside from the flu shot, Dougherty explained the single most important thing to do is prevent the spread of germs. Good hand washing and not touching your face are extremely important this time of year. Also, covering your mouth when you cough is crucial.

“You don’t realize it, but you are infectious up until a day before you show signs and symptoms of the flu,” Daugherty said. “Having good respiratory edict will protect the people around you when you don’t know you are sick.”

“As far as deaths and hospitalizations, we thought we’d go down. That didn’t happen,” said Cox, who leads OCCHD. “Although it is late in the season, we don’t know when it is going to end.”

Flu vaccines are also widely available from a number of local healthcare providers.

There is a downside to getting the vaccine, which takes two weeks to kick in, late in the season, explained Dougherty, who still recommends the vaccine.

Print headline: Flu epidemic; With high numbers of hospitalizations and deaths in the United States at the midpoint of the season, local health officials advise flu season precautions.