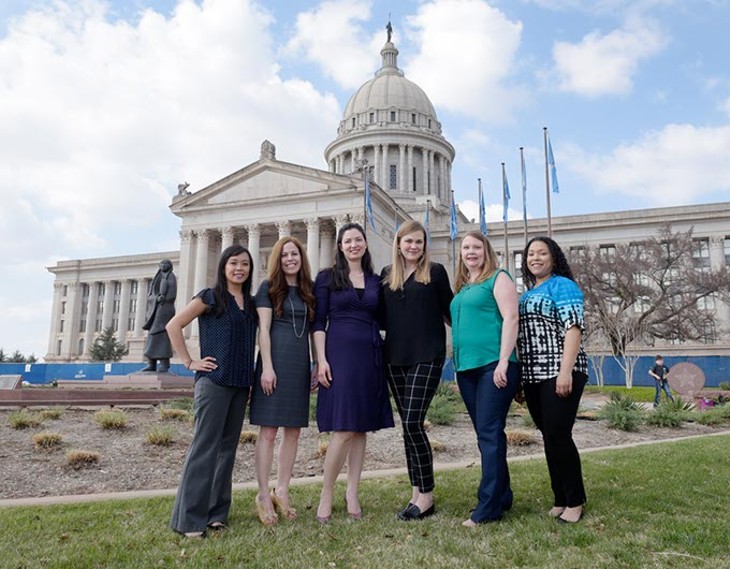 As Stephanie Price puts it, she was a “blueberry in a sea of tomato soup.” The phrase brought humor to her situation as a liberal living in a conservative Oklahoma community, where she experienced feelings of alienation because of her beliefs. Such thoughts only intensified after the November election when Republican presidential candidate Donald Trump swept all 77 counties in the state.

“I felt like I was the only liberal in Oklahoma,” Price said. “I knew it wasn’t true, but I couldn’t find people to connect with that shared my values.”

From controversial Cabinet picks to conflict-of-interest accusations, every day brought a new concern to Price and others like her, who she discovered through social media.

By the time the president signed his first executive orders, Price was connected to an Oklahoma community of like-minded people.

By visiting the Oklahoma Progressive Network’s invite-only Facebook group, she could catch up on national news and share and read opinions about how the new administration affects her community and how to take action.

As a private group, Oklahomans felt free to share viewpoints in a climate free from tense, polarized arguments.

In a few months, the Oklahoma Progressive Network had expanded from a private Facebook group to a public Facebook page with a board dedicated to uniting progressives and promoting civic engagement.

“Part of the goal of Oklahoma Progressive Network is to unify,” said Price, who serves on the group’s board. “It is important to change how people in this state look at the words ‘democrat,’ ‘liberal’ or ‘progressive, ’ which can be perceived as negative words. I want to change that. We are not bad people. We don’t have bad values or ideals. It is important that we don’t feel alone.”

Oklahoma Progressive Network is among the many social media-based grassroots groups to crop up following last year’s presidential election.

The groups tend to be liberal-focused rather than conservative, but the trend runs parallel to the Tea Party movement that grew in prominence following the 2008 election of Democratic President Barack Obama.

Critics have blamed social media for creating “bubbles” in which people largely only see posts and shares from others who hold the same views and political persuasions. Price said such a critique is blind from the realities of those living blue in a red state.

Following the contentious presidential election, Oklahoma’s “silent minority” took to social media in hopes to find and connect with others who shared their views and reservations over the new administration.

Staying quiet was no longer an option, said Jennifer Harmon, a leader in Indivisible Oklahoma. Before the start of 2017, individuals in Oklahoma City and Lawton created invitation-only Facebook pages for Indivisible, part of a national movement to resist Trump’s agenda. Former Democratic Congressional staffers formed the movement in mid-December by sharing a Google document link. By mid-March, there were 25 Oklahoma Indivisible chapters on Facebook.

“What people have said over and over again is ‘My [U.S.] senator is not on the same page as me,’” Harmon said. “People have either said, ‘[President Trump] hasn’t kept his promises’ or ‘I voted for him but had I known that, I wouldn’t.’”

Oklahoma Progressive Network was previously known as the Sooner State’s version of Pantsuit Nation, an invite-only Facebook group that began a few weeks before Election Day to support and celebrate Democrat Hillary Clinton as the first woman president.

Following the election, there was a strong desire to continue the group, but members wanted to take the concept beyond a Facebook support group.

“We want to make civic engagement a natural part of life in Oklahoma; the idea that you register to vote and actually do go vote,” said Christine Huckleberry, Oklahoma Progressive Network co-founder and president. “You know who your elected officials are, and you trust that they will represent you.”

Weekly, the board hosts a podcast examining local, state and federal issues, as the board views all three branches as having a direct effect on Oklahomans, Huckleberry said.

“We understand the landscape here. We know we have to look past parties and start looking at values,” Huckleberry said. “What are Oklahoma values? The value of hard work, the value of community and the value of honesty. Those are nonpartisan values. Those are the values we want to promote in our state.”

Just days after Trump took the oath of office, he signed an executive order to freeze hiring at many federal agencies, including the Department of Veterans Affairs.

The order stunned Harmon, a disabled veteran who has spent the last decade in seminary to become a VA chaplain. The hiring freeze is part of the administration’s focus to overhaul the federal workforce and reduce federal spending. Under the order, only the military and other positions deemed necessary for national security and public safety were exempt.

“When Trump signed that hiring freeze, it cut me out of a job,” she said. “Really we are talking about 40,000 people cut out of jobs.”

Harmon’s situation is pretty common when compared to others on the Indivisible Oklahoma Facebook group.

Between posts and private messages to group administrators, thousands of Oklahomans are affected by the executive orders and proposed federal budget cuts.

“We have spoken,” Harmon said. “They work for us. Now what are they going to do? … It is really ironic that the reddest state in the country has so many Indivisible groups popping up. What is going on? What’s going on is that they are not paying attention and not listening.”