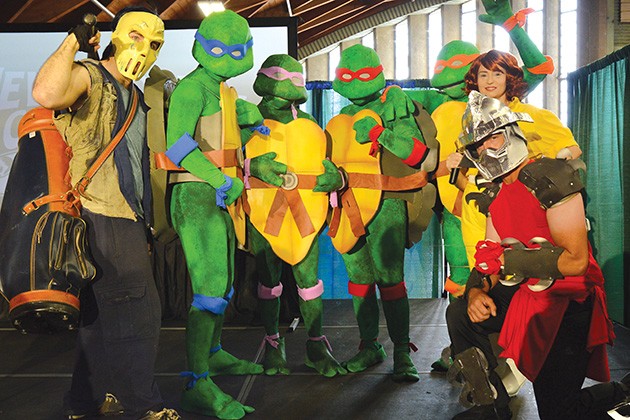 Sponsored by New World Comics, 6219 N. Meridian Ave., owner Buck Berlin and organizer Stephanie Cerny have watched the convention grow from its first year at The Paramount Room to State Fair Park, where it has increased its venue size annually and will be hosted in Expo Hall this year.

“The first year, we had to put it together in three weeks,” Berlin said. “We were expecting 400 to 500 people and got 1,000 to 1,500. The venue was at capacity. You’d go into different rooms and every space was filled. It was a cool experience, but we outgrew the space instantly.”

Berlin has watched various chains and corporate-owned comic conventions come into Oklahoma City throughout the years, but they haven’t been able to achieve sustained success. In contrast, New World Comic Con has focused its attention on local artists and steady growth.

“We’ve had a few fly-by-night cons come through that are just trying to get as much money from the local scene as they can and then go,” Berlin said. “I know that Oklahoma couldn’t quite sustain that, because the numbers they were getting were not too dissimilar from the numbers that we are getting, and they were putting thousands and thousands of more dollars into the thing.”

“Just within Oklahoma City and Tulsa, there’s so much talent here that people don’t know about, and it’s nice to be able to highlight what’s happening in the community,” Cerny said.

Oklahoma City artist Jerry Bennett is the current Skirvin Hilton Oklahoma City artist-in-residence, and his credits include freelance work for DreamWorks, Marvel, Lucasfilm and others. Bennett will appear at this year’s New World Comic Con along with 100 other vendors and artists.

“The organizers are very intentional in placing us in the spotlight, and because of that, aspiring comic creators of all ages see us local comic creators, most of whom are very encouraging and helpful, put our stuff out there, creating another avenue of community to lift one another up to see each other become the very best creators we can be,” Bennett said.

Local illustrator Alexandra Brodt has appeared at New World Comic Con since its second year and credits its platform for building her career.

“We just want to make something cool
for Oklahoma, so to get outside
attention is really big for us.”
— Buck Berlin tweet this

“New World has such an amazing community in Oklahoma City,” Brodt said. “By bringing creators of comics and other artists together, they have given us an outlet to showcase our work to not just recurring but new people who come to the convention. New World Comic Con has become a staple local show for me, where I have a small following that expects me there and loves to see new things I’ve come up with. New World has helped me grow my business by allowing me to be at their con and to help promote all artists who have a table on their social media.”

For the first time in New World Comic Con’s history, it is hosting outside talent including Sandi Sellner, who was Alpha 5 in the original Mighty Morphin Power Rangers series. Texas-based comic artist Sam de la Rosa is one of the earliest artists to work with Marvel on the character Venom, and his resume includes Captain America, Predator and many others.

Both Sellner and de la Rosa will host separate panels in addition to appearing at booths for signings and photos.

“[Sellner] heard good things from other conventions and comic goers and she sought us out specifically,” Berlin said. “We just want to make something cool for Oklahoma, so to get outside attention is really big for us.” 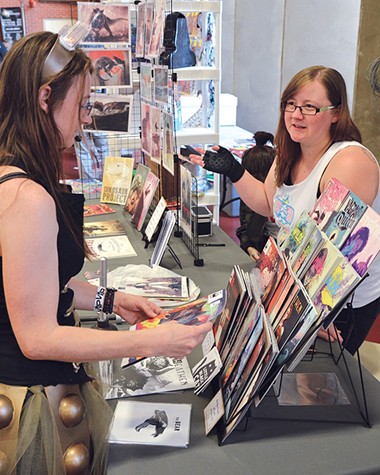 Oklahoma’s connection to comics began in the first half of the 20th century with Dick Tracy creator Chester Gould, who was born in Pawnee. Berlin said some of the most notable appearances of Oklahoma in major comics include Doc Sampson, a major character in the Incredible Hulk comics who was born in Tulsa. In Thor comic books, the Norse God’s home Asgard floated above Broxton since the late 2000s.

Tulsa artist Natasha Alterici, whose Heathen comic series was optioned for a movie this year by producers of the Constantine television series and Frank Miller’s The Spirit, is a regular guest at New World Comic Con and will appear on Saturday.

Admission to the convention is $7 for adults, $5 for children and free for children under five. There will be ample gaming tables, including a Magic the Gathering draft and cosplay contests.

“Instead of having best male and best female [cosplay], we’re breaking it up into categories,” Cerny said. “We’re going to have best anime, video game, comic book, kid’s contest and a free play category, so it is all-inclusive.”

During the convention, New World Comics will host its regular weekly superhero school, which is part of its outreach to get children to read. Throughout the convention, there will be appearances by Teenage Mutant Ninja Turtles and Power Rangers. In addition, Berlin and his staff created a life-sized Pokémon, and Godzilla will battle King Kong on the convention floor.

“The whole family can come out and there is something for everyone to enjoy,” Cerny said. “It’s not so expensive that you get in and can’t buy anything.”