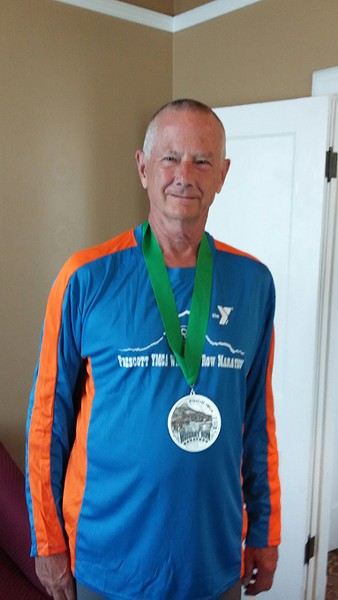 Most people likely have not traveled to all seven continents or even all 50 U.S. states. On Sept. 25, Nels Bentson will have done so while running. The 72-year-old Oklahoma City resident originally from Denver, Colorado, said he began running nearly four decades ago.

Bentson did not run or participate in athletics when he was in school, but he has more than made up for the time lost.

“I joined some friends that were doing it. It seemed to come kind of naturally,” I wasn’t really good at it at first; it was kind of more of a social thing,” said Bentson. “[My] first marathon was in 1984. I’d been running a long time before that.”

Thirty years after he took up running, Bentson faced an obstacle that any runner would dread.

“In 2004, I had to have a complete hip replacement on my right side, which slowed me down for a while,” he said.

Bentson said his physician was not encouraging about his running habit and said he would never run another marathon. But Bentson had other ideas.

“Let them tell me what they want, and I’ll go do what I think I can,” he said.

Bentson continued to run, finding far-flung places in which he could get in his miles.

As a result of his travels, he has run in places such as Iceland, Germany, Mongolia and Tanzania. He has also traveled to and ran on all seven continents. The year following his hip replacement, Bentson accomplished a remarkable feat.

“I went to Antarctica in 2005 and did the full marathon,” Bentson said, “and then went back and did the half marathon in 2007.”

Bentson said running in Antarctica required no special training but the location did pose certain difficulties.

“We ran on ice quite a bit, up and down a glacier,” he said. “The glacier was rather steep. That’s kind of challenging to find that kind of hill here.”

The icy glaciers of Antarctica are a far cry from the trails around Lake Hefner, where Bentson said he likes to run. He averages 35-40 miles over the course of four or five days each week.

By 2010, Bentson had run on all seven continents. His next goal came to him organically, a byproduct of his passion for running.

“At that point, I had 20-some states already completed, so I said, ‘Well, that’s almost half. Let’s do it,’” Bentson said.

Over the years, Bentson has run marathons in 49 states, including the initial Oklahoma City Memorial Marathon.

“I try to stay to the smaller marathons,” Bentson said of his preference to avoid large crowds. “Now, I just find it easier to go on my own.”

He starts and finishes when he wants, running at his own pace.

While Bentson acknowledged the wear and tear that can come from running, he also affirmed the values of running as an exercise helpful for aging.

“It’s hard on your joints, but then, on the other side, there’s a lot of positive health benefits,” he said. “The greatest benefits [are] mental as well as physical. It does help your cognitive thinking. The older you get, you slow down physically and mentally.”

He also said his physician now supports him.

Bentson said he continues to read about running and still learns about ways to improve his technique.

After Bentson’s 50th marathon in New Hampshire in September, he will have run over 1,300 miles.

“People keep asking me what I’m going to do after September,” he said. “I haven’t figured that out yet.”

“I intend to keep on running as long as I’m able,” he said. “I’ll keep running at some distance.”

Print headline: Runner’s high, Come September, septuagenarian Nels Bentson will have run a marathon in every state in the U.S.