Damon Lane first noticed a small bump on the side of his nose last summer. As KOCO-TV’s chief meteorologist, Lane covered the bump with makeup before going on the air. After about six months, the bump was still there and he knew something was wrong.

“It was kind of like a pimple that would bleed,” Lane said. “Then it would heal about 90 percent and bleed again a few weeks later. Luckily, it was in my line-of-sight and not hidden on the back of my neck, so I was able to watch it and see it every day. I knew something wasn’t right and that it needed to be looked at.”

Lane’s doctor performed a biopsy and called him with the results early the next day.

“It was squamous cell carcinoma,” Lane said. “In February, I had surgery, which went in and removed all of the cancer. It was a little bit deeper than normal. As a result of that diagnosis, I now have a 50-50 chance of getting skin cancer again.”

Like many men, Lane says summer- time always meant running around in a pair of shorts and no shirt, soaking up the sun.

“But this type of cancer does not arise because of a single incident but rather a prolonged stretch of my life being outdoors,” he said.

Not long after surgery, Lane was back on the air, sporting a bandage to cover the scar. Rather than try to hide his illness, he was open with viewers about what had happened, hopefully giving them some incentive to get checked.

“It was very visible,” Lane said. “Some said I deserved it because I cut into one of their shows and ruined a day of programming for them. Seriously, though, the best advice I can give everyone is to go get checked, even if you think it’s no big deal.”

Lane’s diagnosis was one of several types of common skin cancer; others include basal cell and the most deadly, melanoma.

Dr. Lori Hansen is one of Oklahoma City’s leading cosmetic surgeons and has dealt extensively with skin cancer and post-surgery reconstruction. 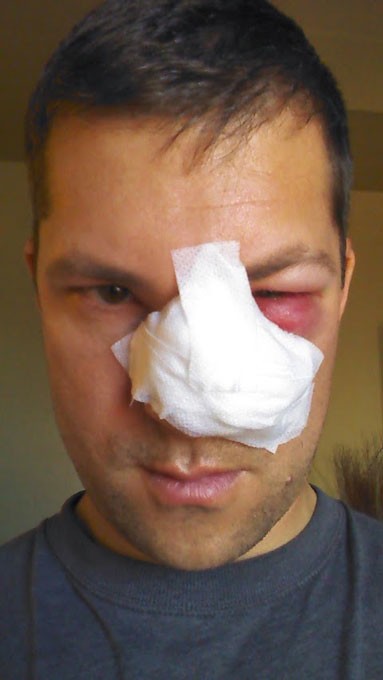 “Skin cancer treatment totally depends upon the cell type of the cancer,” Hansen said. “Some cancers are so characteristic in appearance that the appearance alone can make the diagnosis.”

The treatment for some cancers includes simple destructive methods like shaving, burning or freezing, Hansen said, but in some cases, surgery might be required.

“If the doctor suspects melanoma, a full thickness biopsy must be performed in order to determine the best treatment for the best cure rate,” Hansen said.

Anyone can develop skin cancer, Hansen said, but northern European races are more likely to develop it.

Estimates show one in five Americans will be diagnosed with skin cancer in the course of their lifetime. Even more frightening, statistics show that one person dies from melanoma every hour.

“All skin cancers initially spread locally but can certainly spread throughout the body, although that is exceedingly rare with basal cell and very uncommon with squamous cell cancer,” Hansen said.

Melanoma, on the other hand, is more likely to spread — first to greater depths and then into the lymphatic system and to distant parts of the body.

Hansen said the bottom line is that basal cell and squamous cell cancers are rarely fatal. In fact, they have a very good cure rate. But melanomas can kill you, especially if they spread to lymph nodes or elsewhere in the body.

As warmer weather pervades the state, many will be shedding layers of clothes and spending copious amounts of time in the sun. Nationwide, the month of May is recognized as Melanoma/Skin Cancer Detection and Prevention Month. Hansen says you can still enjoy summer, but protection is the first key to staying safe.

Sunscreen should be at least SPF 30 because it’s rarely applied thickly enough. There is SPF-rated clothing, too. She said a t-shirt only has an SPF of 5.

“The second key is monitoring lesions and moles. In this day and age, one should seek the counsel of a dermatologist,” Hansen said. “Any mole that changes is one a doctor should see. Melanomas can occur pretty much anywhere, but at least you can protect your skin from sun exposure.”