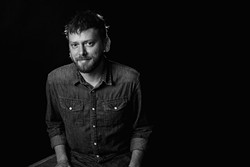 Travis Linville has been a fixture of Norman’s music scene for longer than many of this year’s University of Oklahoma freshman class have been alive. The accomplished roots musician comes from a musical family and has built a considerable reputation locally with tender ballads and twitchy foot-stompers about loss and rebuilding in the heartland.

Linville has performed professionally since he was 17 years old. His talents have taken him across the country and globe as a sideman, bandleader and solo singer-songwriter. He has recorded and released more than seven albums of original material, with production credits on dozens of other projects. Linville performed for his largest audience a few years ago, when he played alongside Hayes Carll on The Tonight Show with Jay Leno and further refined his earnest brand of folk music in the years since.

This year is shaping up to be another busy one for the musician. For starters, he’s organizing the tenth annual Illinois River Jam Sept. 16-17 at Peyton’s Place in Tahlequah. He’s also preparing to release an album of new material while maintaining a rigorous weekly performance schedule and teaching classes the Academy of Contemporary Music at the University of Central Oklahoma (ACM@UCO).

It’s a veritable who’s who in the close-knit world of grassroots Americana. The event is designed to curate and showcase a regional sound and appeal to those looking for a more low-key event than the average music festival.

“It’s really turned into a unique gathering of original musicians and like-minded fans,” Linville said. “And we do it in September, after the busy summer season, so we pretty much have the place to ourselves.”

Illinois River Jam is a sort of passion project for him. He is as eager to talk about the festival as he is his own music projects. This is in line with the ethos of the event itself, which emphasizes community and belonging in a place that can sometimes feel a bit lonely. For musicians featured on the Sept. 16 and 17 bill, it’s an opportunity to reconnect with fans in a new setting far away from the smoky bars and bustling coffee shops that most singer-songwriters call home.

After September, Linville refocuses his energy on a new record that will feature 10 original songs.

“That will be out early next year,” he said. “I’m super excited about it.”

Linville said he will stay close to home the rest of the year, which is good news for those in the metro looking to catch one of his shows.