Mary Reynolds fought back tears as she spoke about the power of Joni Mitchell’s work.

After playing selections spanning Mitchell’s career, the group will perform 1971’s Blue in its entirety. Each artist offers a personal take on songs such as “All I Want,” “The Last Time I Saw Richard” and “River.”

This year’s Mitchell tribute is the sequel to a similar event held last year at The Paramount OKC. Its attendance surprised Reynolds. She said twice as many people came to hear Mitchell covers than usually attend her shows at the same venue.

The tribute seemed special to those who went, Reynolds said. She decided to make the tribute a regular thing. While works by some of Mitchell’s 1970s contemporaries — The Eagles; Boz Skaggs; Crosby, Stills and Nash — are still performed in bars across the country, Mitchell’s music is often overlooked.

Reynolds said they will not perform verbatim versions of Mitchell’s works. For example, they might play Blue songs out of order. Each artist interprets music in her own way. Reynolds said she will sing “My Old Man,” a song that works for her because its theme is universal.

The idea is that personal interpretations help audiences become closer with performers while learning to understand source material in new ways. Tributes like this one can be refreshing musical experiences. 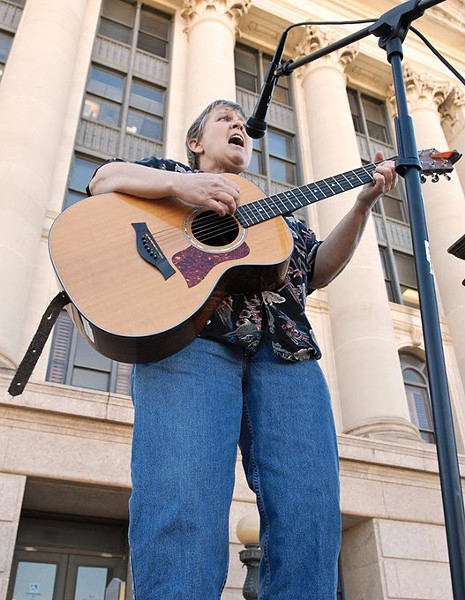 “I think all of these people have very unique viewpoints and voices and really have something to contribute to that Blue experience,” she said.

Reynolds has performed music since 1977. In her early days, she played a lot of coffee shops and pizza places, and she turned to Mitchell’s music because of its rhythmic nature.

She loved playing Mitchell then, but she admitted moving away from it at some point. In part, these tributes create opportunities for Reynolds to return to the work that impacted her.

“Joni Mitchell, to me, is like Shakespeare,” she said. “Sometimes, even in spite of yourself, you quote Shakespeare all the time. Sometimes I say things that are Joni Mitchell lyrics and other people understand me because they’re in the Joni Mitchell game and they love it.”

Tribute to Joni Mitchell with Miss Brown To You and others