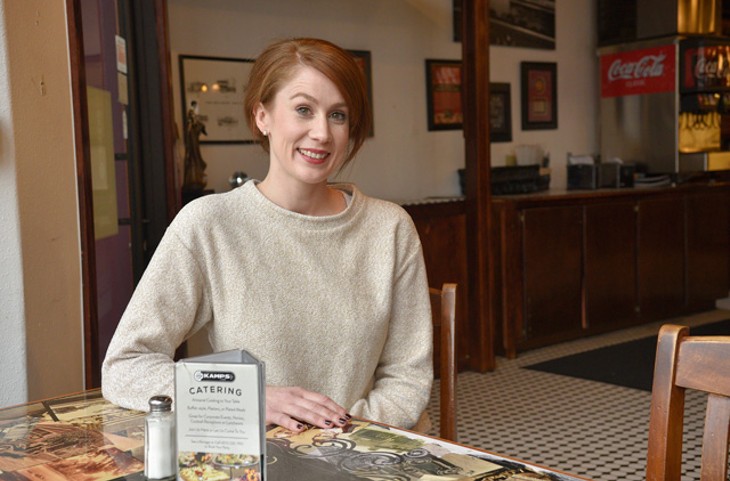 It might have been called Civics 101, but the discussion amongst several dozen women during a midweek lunch at a popular pub in the downtown neighborhood of Midtown had little to do with identifying the three branches of government or chatting about specific rights and duties of citizens. Instead, Women Lead Oklahoma’s program director Elizabeth Horn engaged the women by asking what was on their minds.

At Women Lead’s #7MonthsOfCivics, a monthly lunch series launched this month for women to learn about government structure and how to navigate it, there’s no shame in admitting anything. Don’t know what the county commissioner does? Not a problem. If you aren’t clear about who to call about a pothole or where to start when it comes to a school-related matter, Women Lead — a nonpartisan nonprofit that aims to empower women — will explain. Horn has met many women who find themselves wondering how to get involved in a process that seems beyond their control. Women Lead, along with many other nonpartisan organizations, is working to educate on the roles, systems and actions needed to make a positive and measurable change in individuals’ lives and their communities.

Let’s Fix This, a grassroots movement to bring “regular folks” to the Oklahoma Capitol turned nonprofit centered on civics education, creates opportunities for anyone to engage with state government. The organization’s signature red buttons have become a common sight among those seated in the House and Senate galleries or roaming the halls of the lawmakers’ offices. Let’s Fix This has planned four Capitol days with the first set for Feb. 22.

“Just going to the Capitol is a great chance to see how things work, even if you don’t want to talk to your legislator,” said Andy Moore, founder and executive director of Let’s Fix This. “It’s totally fine just to observe. We are happy to answer any questions.”

Coming into 2018, Let’s Fix This leaders believe the organization can play a greater role in education and is exploring the creation of short videos on subjects like voter registration, what to expect if you’ve never voted before or how a bill becomes state law.

Following the contentious past 12 months at the Capitol, such videos could serve a growing population of citizens seeking an opening into civic engagement.

“2017 was sort of a circus at the state Capitol,” Moore said. “Every week, we got new followers on Facebook and Twitter. People were signing up for our newsletter. This year, as the elections begin to ramp up, I believe we will see people congregate around candidates. I hope that pushes issues back to the forefront. I hope people remember now is the time to have conversations and pay attention.”

Indeed, it is time to pay attention. Locally, many communities face school board and municipal elections in February. Oklahoma conducts its next congressional and state primary elections in June, with majority winners appearing on the November ballot. Oklahomans enter the ballot booth at a unique time in the state’s history. In recent months, state lawmakers were called back twice to the Capitol to address budget issues. Leadership on both sides of the aisle agrees the state has a budget problem. No solution has been reached.

“I see this as a crucial year for Oklahomans,” said Lindsey Kanaly, an organizer for March On Oklahoma and board member for the national March On movement born from the Women’s March with a focus to influence future local, state and midterm elections. “It is time to make Oklahoma the way we want to see it.”

March On Oklahoma, Let’s Fix This, Women Lead and Freedom Oklahoma are joining forces Saturday for Operation: Marching Orders. Following 2018’s Women’s March OKC (see OKG’s calendar section for more information), group leaders will discuss how to channel interest and energy into action to produce change beginning at 2 p.m. at Kamps 1910 Cafe. Additionally, March On will speak about its national online poll to survey individuals and groups about the issues that matter most. The results, which will be broken down nationally, statewide and locally, will be shared with civic engagement groups, advocacy organizations, candidates and elected officials.

All three leaders agreed Operation: Marching Orders is the first of many events from Oklahoma’s nonpartisan organizations dedicated to encouraging voting and other forms of civic engagement in 2018.

Kanaly, who attended the Women Lead Civics 101 event and other similar events, is encouraged by the number of locals coming together to learn how to make a difference.

“I think it is a sign that people want to learn more about how their government works,” Kanaly said. “Not just state and federal, but county and municipal. These are just the very beginning steps of understanding, which will eventually capture the voters for 2018. You have to educate them, give them the power and the tools to make an educated vote.”