It is difficult to pin Pérez’ work down to a single style, but he will give it a name when he has to. 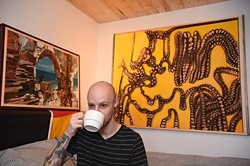 It’s never easy to put visual art into words. The work is usually designed to tap into some ineffable emotional or intellectual feeling that is best expressed without speaking. But every so often, a local artist like Maurice S. Pérez comes along with such clear goals and such a well-formed sense of personal style that it isn’t difficult for them to talk about their work how they want it presented.

Words are never his first choice, though.

“Put a painting in the right space, and I think an internal conversation can take place between the art and the viewer,” Pérez said. “Art is subjective anyway, so I feel like those first moments an art appreciator has with a painting are very important.”

Pérez is the son of a Puerto Rican father and a German mother, and he said his dense, multiethnic upbringing informs his life and work.

“The type of life that I had grown into, the places and people that I’ve seen, the culture and family background that I’ve had, and also understanding that both my parents were trying to start new lives in a foreign land — all of that has influenced me,” he explained. “I was taught to appreciate all that life has to offer, and that has greatly influenced the creative process.”

His recent work, which is more figurative and direct than much of the abstract pieces he has done, heavily focuses on capturing moments and figures from his parents’ youth. He said his aim is to “respect the family that [he has] been a part of, but also to celebrate the diversity that [he has] been fortunate to grow into.”

That diversity formed the core of Pérez’ identity as he traveled across the U.S. and, at times, around the world, as his family moved to places like Kansas, Louisiana, Texas and Germany for his father’s military career before settling in Moore when he was an adolescent.

“I’ve lived in Oklahoma longer than any other place so far during my life,” he said. “For the first time in my life, I was able to build something … and establish roots. The vastness of this state, the agelessness of certain architectural details, the progressiveness of certain changes in the downtown area, the weather — all have influenced me.”

He said the weather most affects his work.

“The fluidity of change that weather possesses and the impact severe weather can create are big influencers, abstractly and emotionally,” he said.

Pérez didn’t intend to pursue a creative lifestyle. He was raised to be a pragmatist. Throughout his teens, he expected his creative talent would lead him into a more traditional career as an architect.

“When the moment came when I needed to choose a degree, I just chose visual art,” he said. “It probably wasn’t the most realistic choice when considering my career choice, [but] I had a feeling and I just stuck with it.”

He used his time at Oklahoma City Community College to learn and develop the technical aspects of painting and to hone his instinct for color and movement. His love of abstract expressionism endured and informed his progress into representational and portraiture painting.

“I get restless if I do the same thing over and over, which is why I work in different areas at times,” Pérez said. “Working with different subject matter is a way of expressing myself, keeping me on toes and never settling during the creative process.”

It is difficult to pin Pérez’ work down to a single style, but he will give it a name when he has to.

“If I had to throw my work into a broad category, I think it would have to be minimalism,” he said. “However, I consider my work to be very dense at times, in terms of the emotions and ideas at play.”

His desire to evolve means more and more people have been drawn to new aspects of his work, which also has led to greater popularity and acclaim. Earlier this year, he won the Viewer’s Choice Award at Oklahoma Visual Arts Coalition’s (OVAC) Momentum OKC art exhibition. He also was a featured artist at OVAC’s 12x12 Art Fundraiser.

“My aim is to create work that is pleasing to the eye but can also be incorporated with other interior design aesthetics,” he said. “Colors, line movement, the building of abstract structures or my interpretation of imagery that has influenced me to this point, [and] I understand that all of that and more can strike a chord in the viewer.”

From his own experience, he knows Oklahoma is a great place for his organic, free-flowing work, as the state evolves and incorporates styles and cultures.

“It’s progressing,” he said. “If you take the time to really look, there are some gems in this Oklahoma art scene. I can only imagine that the local art scene will continue to grow, and that’ll only encourage all artists to step their game up even further.”

Pérez’ work will be featured alongside that of Jessica Legako in Welcome Nostalgia at Graphite Elements and Design, 1751 NW 16th St., through November.