Local police given permission to carry their own rifles

It was viewed as a crucial step in building and sustaining community trust. Days earlier, Black Lives Matter Oklahoma advocated for the action.

During a July 19 Oklahoma City Council meeting, Rev. T. Sheri Dickerson, Black Lives Matter Oklahoma founder, called on the department to post its policies on its website. Police departments around the country, including Tulsa, are doing so to provide more context and transparency for the community.

Oklahoma City Police Department (OKCPD) chief Bill Citty told the city council he supported the decision. Now, anyone with access to the internet can view policies regarding use of force, firearms, training and other law enforcement operations.

Days earlier, John George, Fraternal Order of Police Lodge No. 123 (FOP) president, sent Citty a letter requesting the chief’s support of the action for the safety of both officers and the communities they protect and serve.

“We are asking that officers be allowed to carry personally owned rifles to protect themselves and our citizens,” George wrote in the July 13 letter. “We fully understand the rifle must be an approved model and that officers must qualify to carry the rifle and follow strict guidelines. Allowing our officers to carry rifles could help end a dangerous situation soon and save innocent lives.”

The new policy comes amid weeks of violence involving police in cities across the nation, which ushered activists and concerned citizens to the streets in rallies and protests. Oklahoma City’s July 10 Black Lives Matter rally urged people of every color to continue community dialogue on police brutality, racial discrimination and civil rights.

According to OKC Artists for Justice and Black Lives Matter Oklahoma, a rifle is often unnecessary for daily patrol work and allowing their use on duty sends the wrong message to those who encounter an officer.

“The council needs to take under consideration what it would mean to a portion of the community if we can get rifles with officers but we still don’t have body cameras,” said Grace Franklin, OKC Artists for Justice executive director, during a July 19 Oklahoma City Council meeting.

Franklin and Dickerson called on the council to further discuss the new rifle policy and push toward an agreement with FOP and the department on body cameras. The use of cameras was suspended in mid-June after an arbitrator ordered the program on hold until a policy agreement was reached.

“I don’t think rifles send the message an officer wants to send,” Dickerson said. “I think we need to revisit this, have another discussion and allow us to collaborate to bring more trust between the OKCPD and the community.”

Black Lives Matter Oklahoma and OKC Artists for Justice, along with other civil rights and community groups, plan to continue community dialogue through a series of town halls. Organizers will focus on law enforcement, systemic racism and other social issues and are hopeful the forums lead to a coalition unified around actionable change. 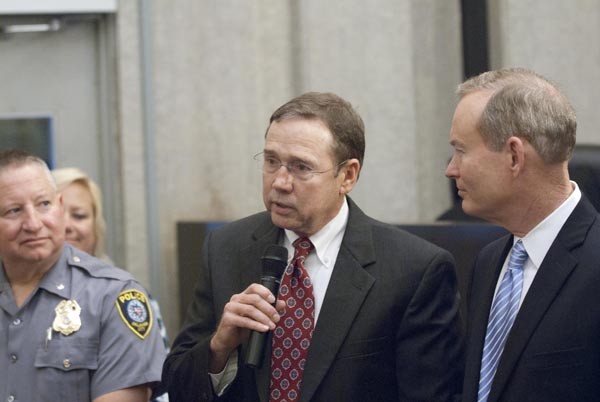 OKCPD public information officer Capt. Paco Balderrama said the personal rifle policy is temporary, as the chief believes officers shouldn’t have to provide their own weapons. Citty is pushing to add to the collection of 211 department-issued rifles, which are similar to AR-15 magazine-fed long rifles.