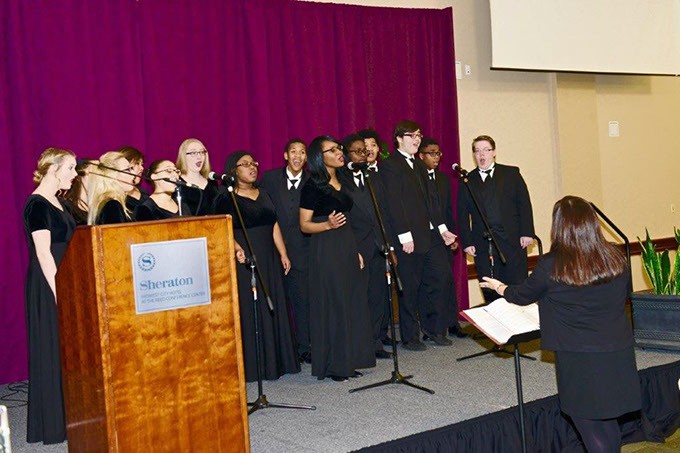 Twenty years ago in Oklahoma City, a group of volunteers started an inclusive, celebratory event whose mission seems, if anything, even more crucial today than it did at inception: the Midwest City Dr. Martin Luther King Jr. Prayer Breakfast.

The 2017 breakfast is Monday inside Sheraton Midwest City Hotel at Reed Conference Center, 5750 Will Rogers Blvd., in Midwest City. Early birds should arrive around 6:15 a.m. to hear performers, including the Midwest City High School Jazz Band, during the prelude. A full buffet breakfast is served 7-8 a.m. At 8 a.m., the program begins and speakers inspire and inform, performers energize and the Clara Luper Community Award is presented.

Event chairwoman Vivian Woodward said the breakfast tends to sell out; however, any remaining tickets will be offered at the door. She has been involved with the event for four years.

“When I learned that there was an agency whose desire was to bring people together in peace and to incorporate everyone in the community, that got me involved,” Woodward said. “We reach out to everyone — every religion, every race, every economic level. We are a group of human beings who get together to celebrate the ideals and legacy of Dr. King.”

This year’s event theme is Tapestry of Unity, which Woodward said symbolizes the beautiful cohesion of a society whose different members and their ancestries and stories are deeply interwoven.

Tickets are $10. Reserved seating, table-of-eight sponsorships, are also available for $200. Around 450-500 guests fill the venue for the annual event, Woodward said.

“Every cent of a ticket goes into the breakfast,” she said.

Johnson served in the Oklahoma State Senate 2005-’14 before retiring. She represented District 48, which includes most of northeastern Oklahoma County. She was the first black woman nominated for a major statewide office in Oklahoma as well as Oklahoma’s first female nominee to the United States Senate of any party in 2014.

Banz completed his term-limited legislative sessions in November and served as Majority Whip. During his career, he represented the eastern part of Midwest City, Choctaw, Harrah, Nicoma Park and southeast Oklahoma County. He helped launch the Oklahoma Honor Flights program, which transports senior veterans to visit memorials dedicated to their service in the nation’s capital.

“We will also present the Clara Luper Community Award for the third year,” Woodward said.

The 2017 honoree is Midwest City police chief Brandon Clabes, whose dedication to changing the philosophy of law enforcement has been a game-changer.

“In Midwest City, our officers have the discretion to help people when they commit crimes that are really acts of desperation,” Clabes said. “Midwest City also has the largest municipal jail in Oklahoma, which is important because within that jail, we have an embedded mental health professional on staff who evaluates every person we bring in. And we offer after care to each person when they come out.

“Sometimes, we learn that the problem is simple — for example, that the person is off of his or her medication because of cost. We can solve that. I always say that in law enforcement, the only things that are black and white are the police cars. Everything else is gray.”

He said he’s humbled to be honored with this year’s award and Luper has long influenced his life and work.

“I had the good fortune to meet Mrs. Luper as a young person because my father was in the newspaper business,” Clabes said. “Then I was fortunate enough to serve on the Midwest City Dr. Martin Luther King Jr. Prayer Breakfast committee with her earlier in my career. I don’t deserve this award; there are so many people who work to make this community stronger.”

Tickets are $10 and are available in advance at the Midwest City Community Center during regular business hours or from Prosperity Real Estate by calling 405-623-1957.