Chad Copelin, co-owner of Blackwatch Studios, has worked with a who’s-who of talented artists, but a new management deal might make him a musical master. 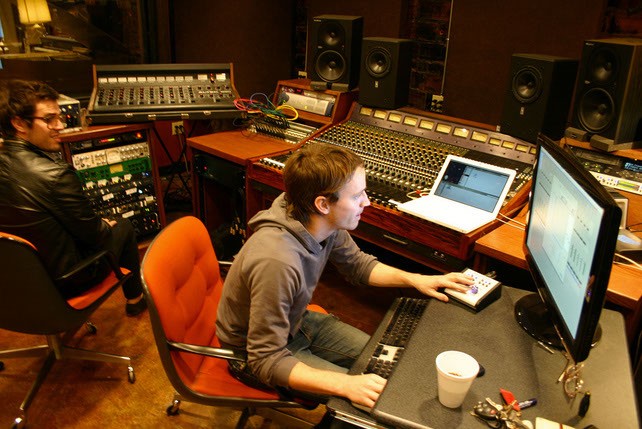 Norman-based producer Chad Copelin, best known for his work with Sufjan Stevens, Broncho and Beau Jennings, has agreed to work with A-Squared Management of Nashville, Tennessee.

Copelin co-owns Blackwatch Studios in Norman with Jarod Evans. The two opened the venue in 2005, and Copelin said he spends about half his working time there.

“There was no signing, per se,” he said. “It was more of a ‘Hey, what if we try this thing out and see what happens?’ scenario.”

Jenn Stookey, a spokesperson for A-Squared, said it will handle projects and tasks that Copelin is too busy to manage.

“We will work on getting him press, developing his web presence and helping to generate more notice than he has been getting,” she said.

Copelin said the relationship does not change the spectrum of music he works on, nor will it affect his relationships with other artists.

“Management can help me with a lot of areas,” Copelin said. “They will help me arrive at budgets, get paid on time and get my name in the hat for new projects. It’s really just about expanding a little and having some help.”

He has no dearth of projects; he’s booked through December.

“If it gets to the point that he isn’t booked, we will help him find projects, too,” Stookey said.

He is a musician and songwriter with his own creative projects in addition to the many credits he has as a producer, engineer, composer and mixer. His discography includes work for Avril Lavigne, Ivan & Alyosha, Other Lives, and Train.

He also has worked with local artist Beau Jennings. In 2005, Copelin recorded Jennings’ first record, Cheyenne’s I am Haunted, I am Alive. It was a formative experience for Jennings.

“I didn’t realize at the time how fortunate I was to have him involved.” Jennings said. “In fact, I’m not sure that record, or any kind of music career I may or may not have right now, would have happened without his help.”

Copelin is working on albums with Barcelona and Bronze Radio Return. He and Evans will soon begin production on another A Blackwatch Christmas project, an annual release filled with local musicians. But up next for Copelin and Evans is a new Broncho record.

“That’s the biggest on the schedule right now,” Copelin said. “We’ve blocked off a couple months for it.”

The artist diversity Copelin draws is part of what attracted A-Squared. He has an ability to work with multiple genres and technical specialties.

“Creative goals for each project are different,” he said. “Sometimes you’re just a facilitator, sometimes a button-pusher, and other times you’re called on for ideas, arrangements, writing, etc. My role constantly changes.”

Creating an emotional connection to his projects is one of Copelin’s goals, and that is likely related to his love for creating music.

“When I work with someone, there is definitely a period of getting to know each other’s tendencies,” he said. “I want to know where they come from musically and how hard we can push or pull each other. I think the best records are the ones you get the most emotionally involved with, but those also become the hardest ones to make.”

As his body of work grows, so does the level of respect he garners in an industry often known for being fickle and temperamental.

When artists find a producer or engineer they trust, they tend to work with that person more than once. That is the conclusion that Jennings drew.

“Since that first record, I’ve recorded a good deal with other talented people and also by myself,” he said, “but no matter what, I usually end up wondering ‘What would Chad do here?’ Not that I know. That’s why I usually just record with him from the get-go.”

Print headline: Darth fader, Chad Copelin, co-owner of Blackwatch Studios, has worked with a who’s-who of talented artists, but a new management deal might make him a musical master.