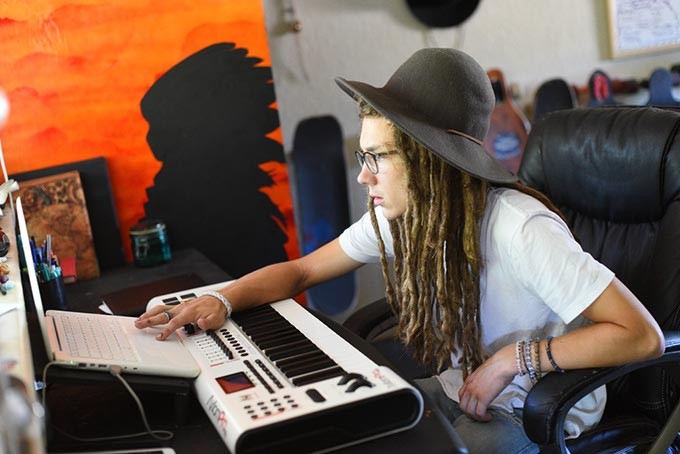 Shaquille O’Neal might be the last person anyone would expect to see walk into The Hubbly Bubbly Hookah & Cafe on a Tuesday night, but one thing is for sure: When the retired professional basketball star enters a building, there’s no mistaking him.

Poetry and spoken word are great, but Peace thought O’Neal, who once showed promising rap chops in a short-lived music career that included collaborations with The Notorious B.I.G. and Fu-Schnickens, would appreciate a different kind of showcase.

“I had just started doing songs when I realized Shaq walked in,” he said.

It was an opportunity he couldn’t pass up, and it paid off. The emcee saw O’Neal waving his hands to the beat of Peace’s tune “Hippy Kid” back in the VIP lounge. After Peace left the stage, he was called back to see O’Neal, who said he wanted to use his song on ShaqFu Radio, his streaming online radio station.

When O’Neal asked him if he was going back onstage, Peace convinced O’Neal to join him as his hype man. In May, a video of the two performing “Hippy Kid” was soon picked up by celebrity gossip and news website TMZ. It quickly went viral.

Peace hopes the chance encounter provides a diving board high enough for him to make the kind of big splash he has planned for a while now. His new album, Blue Peace, is due out in September.

His goal is not merely to reach listeners. It’s to change minds and forge a movement in the state he loves.

“I’m just trying to take advantage of this opportunity,” he said. “I keep saying, ‘Turn this wave into a flood.’ People say this stuff comes in waves, but this isn’t all about me. Oklahoma’s been flooded with culture for years now.”

Peace’s Paseo Arts District apartment is a clean, open space. There’s a noticeable lack of furnishings. A hammock hangs in the corner. A sound booth and makeshift home studio dominate an area by the window. Paintings and a rack of longboards hang on the wall. A calming incense scent wafts through the room.

To step inside is to enter the artist’s mind.

Love and art might be Peace’s mantra now, but he admits it hasn’t always been.

Peace said he has always felt compelled to create, but growing up, most people didn’t recognize him as an artist. He was smart and adept at sports. In high school, most saw him as a nice and funny athlete.

Music eventually made its way to the forefront of his life. He dropped out of sports and concentrated on songwriting. One of his first rap names was Cadency, a moniker he halfheartedly adopted as a nod to his smooth and on-point flow.

“Eventually, it was just like, ‘I think there’s more to me than just staying on beat,’” he said.

He fully embraced the Chief Peace handle, a name he first used on Instagram, but not until he felt he earned it.

He took the time to work on himself after a particularly tumultuous period in his life. He meditated daily and sought a greater understanding of the world, all while improving his musical abilities. Peace grew out his dreadlocks and promised himself that he would also continue to grow mentally.

“I want to make sure I’m not ever stagnant,” he said.

After his encounter with O’Neal, Peace took some criticism for his rap name. Some claimed he misrepresented Native culture.

The artist discussed the complaints with a group of Native friends and artists to clarify his intention in using the name.

“I wanted them to know that this is not a gimmick; this is out of respect,” he said. “I do know that there are probably Native Americans watching the news … and being like, ‘Who is this white kid calling himself Chief Peace? I’m not calling him chief.’”

Some accepted Peace’s explanation and motive; others did not. But he said everyone agreed he did the right thing by opening a conversation. Some other artists might have ignored the criticism.

Peace said his mother moved to California within the last year and his family wants him to move to the West Coast. Though he one day will likely move from Oklahoma to affect the world in new places, he said he wants to make a lasting impression in this state first.

“Oklahoma is just a blank canvas right now; California has been painted plenty of times,” he said. “Yeah, I could paint over it and add my own little touches, or I could do this in Oklahoma and show people you don’t have to move to create anything.”

One could argue that Peace has already made an impact. The young and the old, the big and the small, the masses and the massively famous have joined him singing, “I’m that hippy kid.”

“I want them to look at hippies not as anything but loving music and friends and going outside and enjoying life and good vibes,” he said, “because that’s all I picture.”