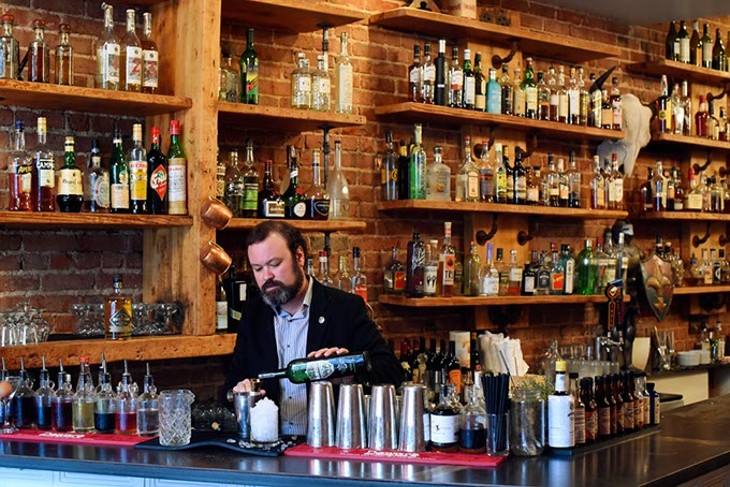 Ludivine’s Chris Barrett fell in love with The Beatles’ Revolver when he was in eighth grade, long before he could legally drink but right on time to appreciate what many critics and fans consider the band’s best album. Now, the Midtown restaurant’s bar manager raises a toast to Revolver on the LP’s 50th anniversary, offering 14 drinks carefully crafted to pay tribute to each song.

“It’s diverse, and that’s also why it works for the cocktails. There’s a range, and there needs to be range on the menu,” Barrett said. “Revolver’s always been my favorite because it still has really good rock tunes influenced by what they were doing before, and then it has them pushing the barriers with orchestral songs like ‘Eleanor Rigby’ and kids’ songs like ‘Yellow Submarine’ and whatever ‘Tomorrow Never Knows’ is. And there’s the ballads like ‘Here, There and Everywhere’ and ‘For No One.’ It’s all there in 14 songs.”

Before beginning his mixology career, Barrett played guitar in multiple Oklahoma City bands, including Twenty Minutes to Vegas and Model 2551, two acts that worshipped at the altar of 1960s rock.

Barrett’s personal Beatlemania was particularly acute, reflected in his songwriting and his stagewear. He said it was only a matter of time before his two passions merged, but his first impulse was to pay tribute to Revolver’s predecessor, 1965’s Rubber Soul.

“At the end of January, I was listening to Rubber Soul and thinking we could do a cocktail menu based on that, but Rubber Soul seemed like more of a fall menu to me,” he said. “So then I switched over to Revolver and thought, ‘This will be a lot more fun, a lot more diverse and a lot more springtime.’” 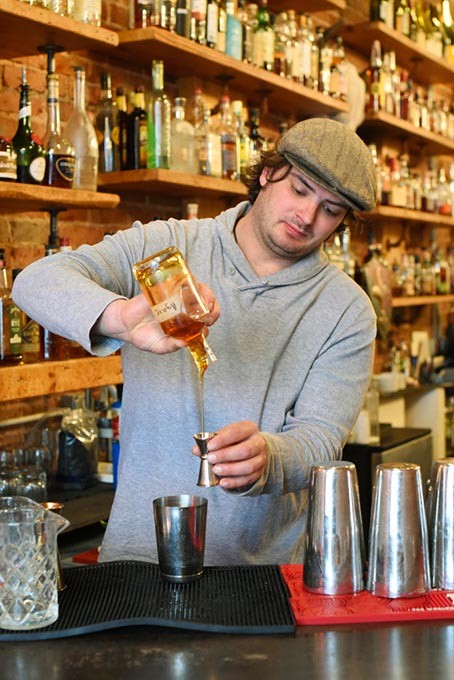 Barrett and fellow Ludivine bartender Colby Poulin found considerable success with their previous special menu, a drinking tour of OKC that featured fare such as Wrong Way on Western, Bombs Over Bricktown and Stockyard Roots. For the Revolver menu, Barrett and Poulin repeatedly listened to the album, pored over lyrics, took note of musical motifs and tone and analyzed the songs’ constituent parts in search of perfect flavors.

Like so many teenagers who studied album covers, read lyrics and even played songs backward to gain insight into The Beatles’ methods, the flavors and ingredients revealed themselves in due time. Barrett decided that a base of Quiet Man Irish whiskey was appropriate for landmark opening track “Taxman” by “quiet one” George Harrison.

Some drinks, like Yellow Submarine, can be identified by sight, but others require a deep analysis of the lyrics.

“For instance, with ‘Eleanor Rigby,’ I just picked up the lyric which said, ‘Eleanor Rigby picks up the rice in the church,’ and my first thought was that sake is made from rice, so I was going to play with that and see if it worked,” Barrett said. “‘Wiping the dirt from his hands’ suggests earthiness, and agave brings an earthiness to the cocktail.”

Sometimes, like for “I’m Only Sleeping,” the mood made the mix.

“Well, you start with absinthe, and I just happened to have an absinthe called Lucid Absinthe, for lucid dreaming. While ‘I’m Only Sleeping’ is trippy, it’s also light and poppy, so there’s strawberry and Aperol, which is a bittersweet, rhubarb-like liquor. It’s familiar yet not familiar, like the backward guitar solo.”

The Beatles always left a few songs entirely open to interpretation, so Barrett decided to leave Tomorrow Never Knows as Ludivine’s “freedom from choice” drink. Rather than trying to find inspiration in the The Tibetan Book of the Dead, as John Lennon did for the song, Barrett lets his customers turn off their minds, relax and float downstream as he mixes something original.

The Revolver menu continues through June, which gives Ludivine customers plenty of time to work through all 14 tracks. While Revolver is easily consumed in a 45-minute session, Barrett said he recommends spacing out the bar menu.

“Hey, if seven people wanted to come in and do the whole thing, two each, we could set that up,” he said. “And we’re going to run it for three months, so it’s very easy for someone to just go down the line. I wouldn’t suggest doing it in one night.

“I’m still waiting for someone to come in and say, ‘This doesn’t taste like Eleanor Rigby to me,’” Barrett said.