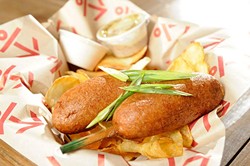 Those who have never been will be forgiven for not immediately understanding the concept of Anchor Down, 30 NE Second St.

It’s The Mule, but with corn dogs instead of grilled cheese.

That might be a tad reductive, but considering the owners of The Mule opened Anchor Down six months ago with a pretty similar philosophy — taking a simple food and making it spectacular — it’s fairly accurate.

However, the menu is a lot smaller at Anchor Down, which means I got to eat pretty much all of it. Take your Prilosec; it’s about to get bumpy.

Inside the shipping container complex OKSEA, the best thing you can do for your mouth is order the jalapeño and cheese hush pups ($7) and a beer. These baseball-sized corn fritters are sweet and spicy and gooey, and there’s nothing healthy about them, unless you count the fiber in the raw pepper slices.

But they taste so good. Dip them in queso or just squirt some mustard on top and go to town. I like to think people invented exercise in anticipation that these hush pups would someday exist.

There is also a dessert hush pup option with strawberries and powdered sugar, if that’s your scene. I tend to stick to the spicy and the cheesy, though.

Though the menu lists it as a seasonal corn chowder ($4), what I had was really more of a soup of the day. But it did have corn in it. A tortilla soup with big chunks of tomato and good heat, it was a nice blend of light and spicy. Be sure to ask what the soup is before you order, though — it’s always a-changing. 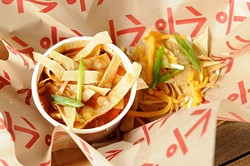 What doesn’t change is the Roger Dog ($7), which is a good thing. The restaurant had a special all-beef dog made, and it’s enrobed in corn batter and fried to perfection. It tasted a little bit like a corn dog you’d get at the state fair, except the sausage inside actually has flavor and texture. Anchor Down makes its own ketchup, too, and I suggest you try it.

I was less enthused about the Guard Dog ($8), which is a vegan product through and through. I took a couple of bites and I was also through and through with it. If you like field roast, you might feel differently, but I’ll reserve my money and stomach space for other items.

Similar to the 5th Amendment at Big Truck Tacos, the Wild Dog is a different

kind of sausage, depending on what’s available. But these are the same guys who invented the Macaroni Pony at The Mule, so I think you can be sure they’ll chef you up something good every time.

If your aim is to die happy, let me point you to the Cheese Dog ($7), which are a pair of corn dogs filled with smoked cheddar and served with a luscious tomato gravy. Gooey, smoky melted cheese and crispy, slightly sweet corn batter are a match made in heaven, which is probably where you will go sooner than later if you eat these regularly.

Some people don’t like corn dogs, which is an outrage and a sham. I demand to see your papers, you so-called “people”!

But, whatever; they can get a Maga Coney ($7) with Anchor Down’s beef hot dog covered in mustard, chili, cheddar, queso, jalapeño and green onion. It comes in a bun instead of on a stick. It’s pretty dang good. 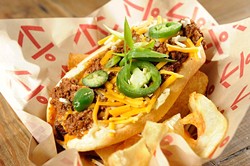 And if you’re not hungry, hey, Anchor Down also happens to be a pretty good bar for watching a basketball game, drinking cocktails and enjoying the neighborhood — which is exactly how one might describe The Mule to their friends.

“You know, it’s like Anchor Down, but with grilled cheese.”

Print headline: Anchored dogs, The grilled cheese masters at The Mule decided it was time to try their hand at corn dogs, and the result is delicious.

What works: Excellent corn dogs and cheese-filled hush pups that will haunt your dreams.

What needs work: The Guard Dog should be put out to pasture.

Tip: It’s not yet open for lunch yet; plan accordingly.