Motivational speaker Jim Rohn has said, “Take care of your body. It’s the only place you have to live.”

At the dawn of a new year, many people make a resolution to “eat right,” but what does that really mean?

Oklahoma Gazette spoke with local restaurateurs about how to eat right and well at home and out on the town.

“I’m better at 37 than I ever was at 25,” said Provision Kitchen executive chef Beth Ann Lyon.

Cooking in restaurant kitchens is hard work, but it can take another kind of toll, too. Late nights and an unhealthy diet had her worn down at a time when, as a new mother, she needed more energy.

In 2015, rather than deep-frying corn fritters and ladling lavish sauces over entrees, she joined Provision Kitchen managing partner Whitney McClendon at the new farm-to-table organic eatery at 6443 Avondale Drive.

It changed her life. She said she has lost 50 pounds and feels healthier than ever.

The first rule of eating right is drinking right, she said.

“I always ask myself, ‘Am I hungry or am I thirsty?’” she said. “You always need water. Eight out of nine times, I’m thirsty and a big glass of water gets me through to my next meal.”

McClendon, a biologist and chemist with a master’s degree in public health, recommends starting each day with a cup of warm water with half a lemon squeezed in it before eating anything else.

“This balances your pH — you would think it would be acidic, but it actually alkalizes your system,” she said. “It also jump-starts digestion, will help hunger cravings throughout the day, boosts your immune system via the vitamin C in the lemon and is extremely hydrating.”

Lyon said those who need more flavor should also drink herbal tea throughout the day.

Spices are an integral part of the Mediterranean diet.

“Seasoning adds so much flavor to the food without adding to the fat content,” he said.

One place chefs hide calories is in sauces, Farhood said.

“Any dish that has a cream sauce is going to raise fat and calorie content ridiculously,” he said.

“When eating out, always ask for salad dressing and cheese on the side; you normally can get away with half of what most restaurants will serve without missing any flavor,” she said. “Ask for any sauce on the side as well, [as] this usually adds 100-200 calories of fat.”

Instead, McClendon recommended the low-maintenance fix of replacing sauce with a little salt and pepper and a squeeze of lemon.

“This is easy to tell the waiter without feeling like you are drawing attention to yourself, which a lot of people worry about,” she explained. 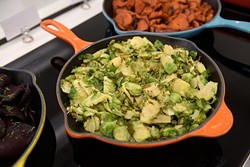 Farhood said more restaurants now post calorie counts and ingredients and mark healthier items on their menus. But if there isn’t any information, ask a waiter.

“When someone tells me they’re looking for a healthier option, I recommend our vegetarian plate,” he said.

With a cup of lentil soup, a lentil-and-rice pilaf, a vegetarian cabbage roll, tabbouleh, hummus and pita, it’s a low-fat meal that satisfies.

“Lentils are going to be one of the 2017 superfoods,” Farhood said. “They’re low fat and high protein. We’re fortunate enough to be able to direct diners to several healthy items.”

Provision Kitchen lists its ingredients above the counter, along with information on where they come from. Many are sourced locally from McClendon’s organic farm.

“Eat real foods — your body will respond incredibly,” she said.

“Since everything is made with the least processed, organic ingredients, your body knows what to do with the calories,” McClendon said.

But that doesn’t mean diners have to deprive themselves.

“Whole grain crackers and a cut of Parmesan or other favorite cheese, with two ingredients max, a scoop of organic ice cream or a few squares of dark chocolate — that’s a good start to new healthy habits,” she said.

Print headline: Restaurant remix, Struggling with a healthy eating resolution? Use tips from local restaurants to eat better no matter who is cooking.

Wash Brussels sprouts. Cut off any brown ends and halve lengthwise. Toss sprouts in oil. Sprinkle with thyme, salt and pepper. Roast on a sheet pan for 30-40 minutes, stirring occasionally. Remove when crisp on the outside and tender on the inside. Immediately toss with sherry vinegar. Add more salt and pepper if desired. Serve while hot.

Eliminate sherry vinegar and this is a great base recipe for any roasted vegetable such as cauliflower, broccoli, carrots, squash, cubed white or sweet potatoes, etc. Feel free to substitute thyme with rosemary, sage or another herb.