“I’m almost even more meticulous,” he said. “I’m pickier in the decisions that I make.” 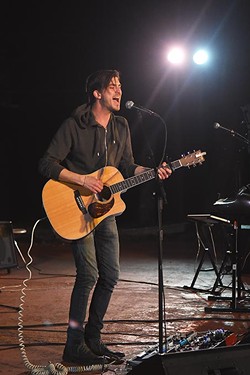 The last time most of America saw Chase Kerby, he was ending his successful run on season nine of NBC’s The Voice. Now back home in Oklahoma City, the 31-year-old musician plots his next steps in the world of professional music.

“I’ve been busy. Writing [music] a lot,” Kerby said concerning his life after The Voice. “It’s always good to be home.”

Kerby’s life in music did not begin with the NBC show. He has toured in rock bands since the age of 19, including a trek with Stillwater’s The All-American Rejects with his former band, The City Lives. The band was signed on the Oklahoma record label Edmond Records.

Since his appearances on The Voice in early October, social and professional interest in Kerby has risen.

“I’ve heard from a lot of people randomly, just life friends and family,” he said. “People coming in to say hi to me at the candy store.”

Kerby and his mother run 42nd Street Candy Co. in Oklahoma City. It appeared on The Voice in the form of a box of candy Kerby gave judge Gwen Stefani.

“I’ve heard from a few people here and there as far as music on a professional level,” he said. “A lot of it has been kind of behind-the-scenes work and planning toward what can be the best steps for 2016.”

Kerby has been a busy man. He released his first solo effort, the four-song EP Tidal Friction, a year ago. It features songs layered with piano and ambient, atmospheric sounds at a laid-back pace. The music is hard to define. There are small hints of Coldplay. At times, the choral vocals are reminiscent of those from The Flaming Lips’ “The Gash” from The Soft Bulletin, but comparisons abruptly stop there.

Kerby’s sound is all his own, which makes his next release all the more interesting. He plans to drop his next EP, A Quiet Man, in the next few months. The project is a 180-degree diversion from the layered, windy sound of Tidal Friction.

“I have all these songs, and I wanted to take a handful of them and make something that is really stripped-back and really honest,” he said.

The sound of A Quiet Man is that of a singer-songwriter and its songs feature little more than Kerby’s vocals and guitar.

“I thought it was kind of important to take the integrity of these songs and the heart and emotion and put them in verse,” he said.

The acoustic guitar and vocals were recorded together live, with two microphones. The technology used to capture the sound was purposely sparse and minimalistic — Kerby didn’t even listen through headphones while playing.

“That [minimalism] was kind of the idea,” he said. “I think wearing headphones kind of pulled me out of it. It was like I was focusing too much on the details.”

He said the meager sound of the new EP allowed him to confront certain aspects of his music for the first time.

“It’s important to me as a songwriter to capture a certain vulnerability by bringing it back and saying, ‘Here’s the song. This is all you get.’”

Kerby said the atmospheric sound of Tidal Friction and stripped-down songs on A Quiet Man represent the two sides of his songwriting, a feature he will soon explore with an upcoming EP he hasn’t recorded yet.

“It will probably be the middle ground between Tidal Friction and A Quiet Man,” he said.

He explained how the EP will take the acoustic guitar foundation from A Quiet Man and mix it with the ambient sounds of Tidal Friction.

Aside from his solo project, Kerby also fronts Chase Kerby + The Villains. Along with singing duties, he plays guitar and keys in the four-piece outfit. Kerby’s next full-length album will be a Villain’s project.

“I’ll be hopefully going into the studio at the beginning of the year and doing the full band thing,” he said.

He is also toying with the idea of releasing a Chase Kerby & The Villains EP before the full-length album.

Kerby’s dance card is filled to the brim. He has a solo performance Dec. 18 for the Midtown Songwriter Series at City Pres. He plans to tour early next year either with The Villains or by himself. He has also secured a slot at Norman Music Festival 9 in late April.

Along with the changes The Voice has brought him in his everyday life, Kerby feels the effect internally.

“There 40,000 people who auditioned and only 48 who made the teams,” he said. “It’s definitely changed the way I think about myself and my music.”

Now that making a living is a reality for Kerby, he looks at his work in a different light.

“I’m almost even more meticulous,” he said. “I’m pickier in the decisions that I make.”

He knows his time is now. The show served as an on-ramp for him to be heard — an opportunity few receive, or in the case of The Voice, a chance that only 0.0012 percent were given.

“[The Voice] validates the thought that this is a feasible thing,” Kerby said, “which is nice.”

Print headline: Quiet storm, Local singer-songwriter Chase Kerby makes his loudest proclamations about vulnerability and self as he strips down to his voice and his guitar.