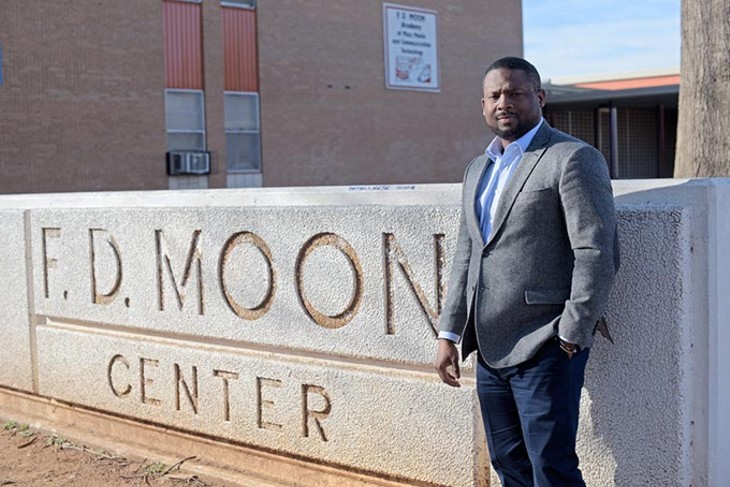 Educators know very well when districts are forced to squeeze school budgets, the cuts mean a short supply of teachers, larger classes, less support and fewer opportunities for students. All of this slows down student achievement.

“Every time we go through cuts and cut teachers — we can’t cut math or language arts — we cut programs and electives. Our kids have less and less to choose from,” said Jahree Herzer, principal of Spencer’s Rogers Middle School. “When they have less to choose from, kids go to other [schools]. Then we have fewer kids and we get less funding. With less funding, we have more cuts. We see a cycle.”

The cycle paints a grim picture of the state of education at Rogers Middle School, one of 13 school sites in District 5 of Oklahoma City Public Schools. Located in northeast and southeast sections of Oklahoma City and Spencer, District 5 schools are in some of the metro’s poorest neighborhoods and hold the district’s largest concentration of black students. For decades, District 5 schools have demonstrated poor academic outcomes, low graduation rates and high rates of students leaving schools.

Such dismal results bring educators like Herzer and community leaders, faith leaders, parents and students together as the Northeast Task Force. The adage “It takes a village to raise a child” plays out Thursday nights around tables in a conference room on Metro Technology Center’s Springlake campus. At each meeting, the task force takes on issues and explores solutions in areas of school structure, academics and wraparound services, which relates to providing support networks among students with emotional or behavioral disabilities.

While there is no single overriding reason for failing schools, the task force looks at all sides of the issues to solve the problems. Channeling their passions and pride into improving District 5 schools, the task force finds opportunities to make changes, some big and some small, within the district to yield better results for students.

With all eyes on Herzer, task force members listened as the principal defined a problem with school structure in terms of a possible solution.

“If we were able to align our days, we could share elective teachers,” Herzer said.

Rogers Middle School, which begins classes at 9:10 a.m., is located less than a mile south of Star Spencer High School, where school begins at 7:35 a.m.

The pressure to improve northeast OKC and Spencer schools is intense, and Northeast Task Force members are well-versed in school struggles.

The task force notion first took root following the contentious community debate over KIPP Reach’s application to expand its charter school program in northeast OKC last year. Noting that those on each side of the debate held a desire to see academically strong neighborhood schools, Superintendent Aurora Lora called for the formation of a community collaborative, increasing civic participation and helping solve some of the schools’ most significant challenges.

For the 2014-15 school year, seven northeast OKC elementary schools posted test scores in math, reading, social studies, science and writing below state averages, according to data from the Office of Educational Quality and Accountability. At the middle and high school levels, End of Instruction test scores weren’t much better — 5 percent of Douglass students and 8 percent of Northeast students earned proficient or above on the biology exam.

All northeast OKC and Spencer schools earned “F” letter grades from the state Department of Education when the A-F school grades were released last October. Northeast Academy, grades nine through 12, received a “C-.”

District 5 students haven’t been struggling in secret. For years, the community has begged for a school system based on equality to make sure all students develop their potential. One such community member is Sandino Thompson, who now serves on the task force.

While troubled by the poor education outcomes, Thompson entered the task force determined to push the district to implement wraparound programs to help schools address the social and non-academic barriers to student learning.

“It’s not just about literacy and math scores,” he said. “It’s about improving socio-emotional competencies, which has an impact on students’ ability to learn. … We have educators who were taught and learned how to be educators. They were not trained to be psychologists and behavior health specialties. How do we bring those dynamics together so that we can get serious about learning?”

When the task force began meeting on Jan. 19, the group was instructed to closely evaluate the district’s implementation of The Great Commitment — OKCPS goals and measures for student success — to benefit black students as well as review research and best practices to improve chronically low-performing schools over a seven-week period.

In the first five weeks, the group discussed many education approaches and strategies, like increasing support for teachers, providing teachers and staff trauma sensitivity training and positioning schools as community centers with multiple community partners ranging from food banks and clothes closets to social workers and counselors. In small groups, task force members discussed exploring ways to reconfigure Title 1 funding, which helps schools with economically disadvantaged students, as well as eliminating the current middle-high school model at Northeast Academy and Douglass. Another suggestion calls for the district to establish stakeholders committees to define and monitor strategic visions for academic programming in each prekindergarten through 12th-grade feeder pattern.

On March 2, the task force reviews the final draft of recommendations, which will be delivered to district leaders and the Oklahoma City Public Schools Board of Education, which is ultimately tasked with implementing recommended measures or not. As the district continues to face financial setbacks, the result of dwindling state revenue collections, recommendations that require extra funding, resources and staff could be pushed to the backburner.

“I would like to see a comprehensive effort and commitment to really respond to kids coming to school with socio-emotional baggage,” he said, referencing his desire for the district to implement the community-based schools model. “We can’t depend on the academics and discipline system alone. The district has to go down that path.”

Northeast Oklahoma City, home to the city’s largest black communities, has a rich and diverse history. However, the area has also suffered from decades of economic isolation, which made way for blight, high crime, poor health outcomes and unfavorable environmental conditions. Through a variety of community-driven endeavors, northeast OKC is receiving much-needed attention in areas of economic development, criminal justice and health.

>> The Northeast Renaissance Stakeholder Committee is a community organization focused on the economic resurgence of the area. The group meets monthly, presenting updates on economic plans associated with the area, like the $45 million tax increment financing (TIF) district established by the Oklahoma City Council called the Northeast Renaissance Redevelopment Project. Major developments in northeast OKC include Northeast Town Center, located along NE 36th Street, which was redeveloped to lure a full-service grocery store to the area, and the redevelopment of the Page Woodson School building into residential housing.

>> Oklahoma City Police Department Springlake Division received a $730,000 Safe Oklahoma grant from the Oklahoma Office of the Attorney General. Through the grant, officers are establishing a community policy approach in which they go door to door to meet with residents. Officers inquire about citizens’ concerns and answer any questions about the department.

>> Healthy Community Collaborative — Northeast Oklahoma City began a multilayered initiative to improve the health of residents living in northeast OKC in 2016. Through the aid of Lynn Institute for Healthcare Research Inc., the 36-member collaborative has proposed community solutions and begins the implementation process this spring. Through community solutions in areas of environment, transportation, crime and the economy, the collaborative seeks to make an impact on the health and vibrancy of northeast Oklahoma City.