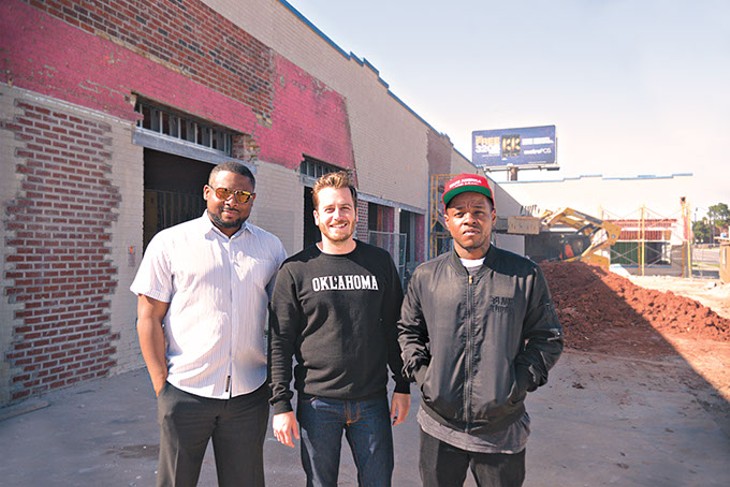 The story behind the first development project along Oklahoma City’s NE 23rd Street in 38 years begins somewhere in the 1980s, when kids from traditionally black neighborhoods like Ross Heights, Culbertson, Capitol View, Creston Hills and Lincoln Terrace walked up and down NE 23rd Street.

The commercial corridor between Interstate 235 and the Oklahoma River was a mix of businesses, restaurants and houses of worship with a few boarded-up storefronts. Years later, as these children progressed into adolescence, the city blocks were nearly hollowed out. Witnessing the economy and opportunities dry up in northeast OKC never left the minds of the millennials who became professionals living and working in the area. As downtown OKC and the city’s various urban commercial districts began to transform into beautiful and flourishing places, native eastsiders asked, How do we make the OKC renaissance story our story?

That question is now the key driver in today’s northeast OKC urban comeback, beginning at the intersection of NE 23rd Street and N. Rhode Island Avenue.

“The reason we are doing this is because all I think about is the future,” said Jabee Williams, a prominent local rapper and community activist who grew up near NE 16th Street and N. Lottie Avenue.

Williams, who goes by the stage name Jabee, joins Sandino Thompson, Quintin Hughes and Jonathan Dodson in the development team of a two-phase project along NE 23rd Street. Next spring, a $4.3 million investment in phase one brings health services to the community with Oklahoma City Clinic as its anchor. In phase two, another multi-million dollar investment, restaurants, retail and a creative work space will be added to a rehabbed city block, which now houses local staples A Family Affair Restaurant and La Moor Beauty Supply.

“The east side deserves something first,” explained Dodson, who is a partner in Pivot Project, also led by developers Ben Sellers and David Wanzer.

Pivot Project is well-known for urban projects like Tower Theatre, Main Street Arcade and the Sunshine Cleaners building. Like past Pivot Projects, Dodson said the northeast OKC project will bring new and authentic businesses, which will be between 60 to 70 percent minority-owned, to the area.

“So much of the renaissance is happing on the west side of I-235,” said Dodson, who first became interested in northeast OKC after an introduction to Thompson a few years ago. “We felt like this was an opportunity to do something on the east side. Part of our story is that we give the tenants ownership. They get to share in the wealth they help create.”

Four years ago, the northeast community’s young professionals, creatives, innovators and entrepreneurs — those who grew up in the neighborhoods south and north of NE 23rd Street — began meeting to discuss an eastside renaissance and how to correct decades of slow progress, Thompson said. The answers were not simple. They found that development depended on many moving parts, from accessing capital and public financing to the assistance of well-known urban planners and gaining the community’s support. If any parts were missing, development of any kind wouldn’t happen.

“The community has been united in a way I haven’t seen in 38 years of living in Oklahoma City,” Thompson said. “People are on the same page. We go and talk to people who have lived here forever. They have shared what they tried, what worked and what didn’t. We have people around the table who are working to maintain what we have.”

“What I’ve been trying to do is get people excited about what’s about to happen, whether its a friend or a business owner,” Jabee said. “For so long, there wasn’t anything to see. It has to be done first before people see that we can revolutionize the city on this side of town, but also that people can work together for things like this.”

Before Oklahoma City Clinic leaders were joined by members of the development team and elected leaders to break ground for the new clinic, Eran Harrill, CEO of the city’s Black Chamber of Commerce, explained that it took visionaries to look past the crumbling automotive shop building to see its future as a health facility, but also a catalyst for future development.

The Oklahoma City Clinic is a 95-year-old health organization designed to treat adults with Medicare. In addition to its clinic space, the construction plans call for a classroom, which clinic leaders say will allow for education events and community meetings centered on health education. Various research supports that high-risk health conditions including diabetes, obesity, hypertension and high infant mortality rate are prevalent among residents of northeast OKC ZIP codes, including 73111.

The Oklahoma City Council pledged a $1.3 million tax increment financing (TIF) agreement towards the development’s first phase. TIF is a tool utilized by municipalities to spur development that would likely not occur without an incentive. In 2014, Councilman John Pettis Jr., who also grew up in northeast OKC in the 1980s, championed the development of a TIF district to support the Northeast Renaissance Urban Renewal Plan. The plan was designed to benefit the blighted NE 23rd Street corridor between Interstate 235 and the Oklahoma River as well as spur development along and near NE 36th Street. TIF funds were secured for the development of the $7 million Northeast Shopping Center along NE 36th Street. Save-A-Lot will anchor the redevelopment.

Pettis described the TIF as “bringing true opportunity for those who live and work in northeast Oklahoma City.”

So is the development unfolding at the intersection of NE 23rd Street and Rhode Island Avenue. Last week, Jabee, Dodson and Thompson walked around the property, explaining their vision. This development will change the economic trajectory of NE 23rd Street. In simpler terms, they are building a community gathering spot, where people of all ages want to come for dinner, shopping or health care needs.

Print headline: Next chapter; Locals with a desire to write another chapter in Oklahoma City’s renaissance story drive the redevelopment project on NE 23rd Street.