Many people swear by Lola’s, and our readers wondered why we haven’t mentioned it in awhile. 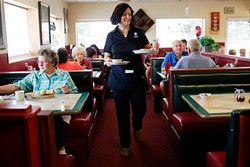 I met her in a diner up in northwest OKC, where you drink Coca-Cola that tastes just like Coca-Cola.

She walked up to me and she asked me what I would have, and I asked her for a minute because I didn’t know what to order at Lola’s.

(There are several reasons I’m not a songwriter, but the most important one might be how hyperfocused I am on food. Anyway, let me know how long it takes to remove that earworm by The Kinks, would ya?) 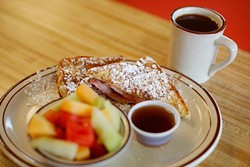 It had been a fair few years since my last visit to Lola’s, 9148 N. MacArthur Blvd., because I wasn’t overly impressed back then. Oklahoma City teems with new breakfast places, brunch spots and old diners. If it’s not great, it’s easy to move on.

But many people swear by Lola’s, and our readers wondered why we haven’t mentioned it in awhile. Since it had been several years since Oklahoma Gazette reviewed the restaurant, I gave it another try.

What I learned between my earlier Lola’s meals and my more recent breakfasts and lunches there is that every diner has its specialties. You cannot impose onto any diner the contrarian beliefs of what you want a diner to be. You must navigate each menu to find the things each venue does best.

Or a faster way to learn this would be to ask your waitress, who likely has a few informed and helpful opinions.

The omelets are well regarded at Lola’s, but I took a cue from a friend and ordered the chicken-fried steak with eggs ($7.99). There is no breakfast more quintessentially Oklahoman to me than chicken-fried steak. It’s a meal that proudly tells the world, “I might do something that requires a lot of energy today, and I need these calories!”

Well, I didn’t do anything after I ate my perfectly crispy, fork-tender steak but lean back in my booth and sigh with appreciation. The eggs, cooked over-easy, had set whites and runny yolks, which I greedily sopped up with a biscuit.

The grits ($1.69 for a cup, $2.65 for a bowl) were creamy but a bit underseasoned. Perhaps that’s because there is such a variety of preferences for either sugary grits or those with salt and butter. There was an easy remedy: A few shakes of table salt perfected them for my palate. 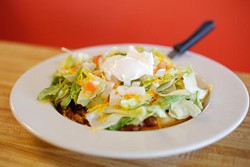 I tend toward savory breakfasts, but there’s no shame in dallying with a stack of pancakes (two for $3.99, 3 for $4.75). Served with warm syrup, they had a natural sweetness and hint of spongy citrus that made them hard to stop eating.

And if you like to combine savory with sweet, Lola’s serves an untraditional Monte Cristo ($6.99). You can choose bacon, ham or turkey, but I recommend you choose ham. It comes with melted Swiss cheese and is served between slices of French toast and topped with a winter’s frost of powdered sugar. If that’s not sweet enough, you can dip it in the provided syrup.

This lacks the fried, crispy exterior of the traditional sandwich, but it was tasty nonetheless.

If you’re in the mood for something even heartier, I recommend the classic fair-food Indian taco ($6.75). Rather than the greasy version some places slide onto a plate, Lola’s blended tender ground beef and beans with crisp lettuce and tomatoes. The fry bread holds up well, and while it’s not as monstrously large as some I’ve seen, it’s definitely enough to fill you up without requiring a box for leftovers.

Lola’s has a grand opening sign up in front, though it has been there for many years. Apparently, a city truck backed into the building not too long ago, necessitating a few months off.

However it happened, it’s nice to see the friendly staff back on the floor, passing around hash browns and pouring coffee like the Lola’s of old.

And now that I know how to navigate the menu, it won’t be nearly so long between visits. 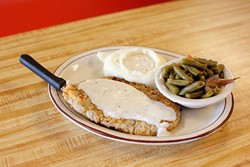 Print headline: Sunday afternoon; Not all diners are the same. Find your favorites by learning what each does best.

What works: Chicken-fried steak and Indian tacos are the real deal. What needs work: Sides, like hash browns and grits, need more seasoning. Tip: The cream pies are homemade.