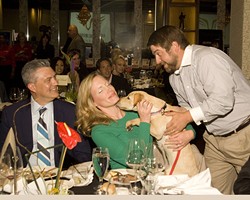 As the only surviving member of SEAL Team 10 in Operation Red Wings, a mission to kill or capture a high-ranking Taliban leader, Marcus Luttrell had a story to tell and healing to do.

The shootout that occurred in the mountainous eastern Afghanistan terrain stemmed from the team’s hard decision to let a group of goat herders go after they stumbled upon their location was documented in 2007 New York Times best-seller Lone Survivor. The healing Luttrell experienced on his ranch in Texas with family and friends after the incident that killed three team members and all 16 of the men sent to save them inspired him to establish the Lone Survivor Foundation.

Lone Survivor gives military service members suffering from invisible scars of combat the chance to feel the same type of healing Luttrell did on his ranch.

The foundation’s website, lonesurvivorfoundation.org, describes the heightened need of resources for those affected by combat stress (PTSD), mild traumatic brain injury (mTBI), chronic pain and sexual trauma due to past and ongoing conflict.

Conover, who also is on the planning committee for the upcoming Lone Survivor Oklahoma Baubles & Boots Gala, described his journey with mTBI and PTSD.

He explained that he repressed trauma for years after leaving the army in 2005, but a car accident that resulted in a fatality shifted his brain into “combat mode.”

“The smell of the cordite in the airbag — when it exploded, it’s the same as the smell of a battlefield,” he said.

“I didn’t want to live anymore,” he said. “My PTSD affected me that much.”

According to Conover, the people at Lone Survivor reached out to him almost immediately after he filled out the online application.

“In three weeks, I was on my first retreat in Dallas,” he said.

“[Lone Survivor] raise[s] money for these retreats, and the veterans are not out a dime,” explained Debbie Ritter, event planner for Baubles & Boots.

A central theme of the retreats is education. Conover said the first two days of his retreat were filled with education on PTSD and mTBI. They go over the same 17 symptoms the VA uses to assess PTSD.

“The intent of the retreat is to show you that you are, in fact, damaged,” he said, “because there are a lot of folks that don’t believe it.”

Conover explained how neurofeedback was used to show him and the other men, who served similar combat roles, the damage done to their brains from concussion-like trauma. He explained that the tough exterior military personnel are encouraged to adopt makes it hard for some to seek help.

The second retreat educates primary caregivers on how to deal with veterans they are often unfamiliar with after they return from conflict.

“It changed my life with my wife,” he said. “It saved our marriage.”

The last retreat includes military members’ children and gives families a chance to bond. Children are educated about why their parent might get angered easily, has to take frequent naps or can’t be around too many people, explained Conover.

He said the family retreat includes activities like archery and swimming to make it fun for kids. Equine therapy is used in all the retreats and helps participants practice potentially stressful situations and get immediate feedback since horses mimic emotions and behaviors.

The gala begins at 5:30 p.m. Aug. 13, and attendees are encouraged to wear ball gowns with cowboy boots and tuxedo tails with blue jeans for an evening filled with cocktails, silent and live auctions, dinner, speakers and dancing.

Ritter said the foundation would like more land so it could send more military members on retreats. She talked about how the facility built off the coast of Galveston is already booked through 2016. Ritter believes fate drew her to Lone Survivor, and she teared up as she talked about her husband, who was a Vietnam veteran affected by Agent Orange.

“They really care, and they really follow through,” she said. “That’s the big thing.”