Long-awaited passenger rail line will soon be reality, as might expansion plans 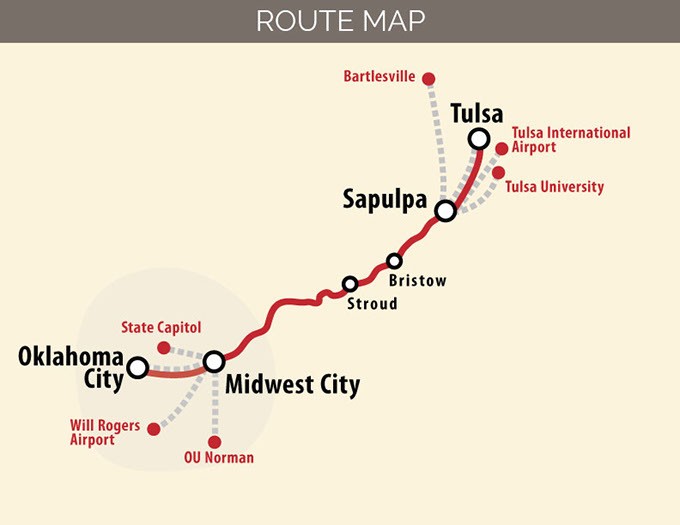 Evan Stair might be the biggest supporter of expanded passenger rail service in Oklahoma. He was also probably the biggest skeptic that it would happen.

“It’s kind of hard to believe we are seeing this,” Stair said about the new Eastern Flyer rail line.

The passenger rail line linking Oklahoma City and Tulsa will be the first proposed transit project in recent years to be completed. It also could be the first in a series of transit-related projects, including a new downtown streetcar system in 2018 and, in several years, a possible regional transit system that has already been endorsed by city leaders.

Stair leads Passenger Rail Oklahoma, a grassroots organization that champions expanded passenger rail service to the state. He has been an advocate for more rail options, even when frustrating dealings with Amtrak, the Oklahoma Department of Transportation and other agencies left him wondering if it would ever happen.

“It took a lot of work to get to this point,” Stair said.

Starting February 2015, a passenger rail line will link OKC with the Tulsa area by twice-daily trips between the two cities. Work is underway to bring the trains into downtown OKC and Tulsa, as the current route stops short of both cities. But until that happens, Iowa Pacific, which owns and operates the Eastern Flyer, will use buses to shuttle passengers from the OKC station near Midwest City to various locations across the metro, including Will Rogers World Airport and the state Capitol.

Stair is excited for the new route, but his group originally wanted service from OKC to Wichita, which would have given OKC access to Kansas City and other cities along a west-east Amtrak line.

“That effort fell apart in 2010 mainly due to Kansas Gov. [Sam] Brownback, who didn’t see a need for passenger rail,” Stair said about the lack of support from leaders in Kansas and Oklahoma.

Passenger Rail Oklahoma instead advocated for a Tulsa-OKC line, realizing that it could someday allow for a connection to Kansas City via a freight line that travels north from New Orleans to Kansas City, passing close to Tulsa.

“[Morrissette] was instrumental in starting the Eastern Flyer Passenger Rail Development Task Force, and that legislation was passed in 2011,” Stair said.

The task force studied and planned a passenger line connecting the state’s two largest cities and sought a public or private solution. The work helped bring Iowa Pacific to the table.

“I am excited to learn that recent trial efforts to put rail back on the line between Oklahoma City and Tulsa have been successful,” said Morrissette following Iowa Pacific’s announcement that it would operate the line.

“Dedicated volunteer rail advocates in Oklahoma have pushed for this service, literally for decades.”

Stair hopes the Eastern Flyer will expand the frequency of its service as ridership builds. He also hopes to extend the line past Tulsa, which could link OKC with Kansas City, St. Louis, New Orleans and Chicago.

“What you have to look at is what we are doing is an incremental step toward larger service,” Stair said. “But Oklahoma City-to-Tulsa is a viable passenger rail route.”

While the Eastern Flyer is prepared to start service without a stop in downtown OKC, project officials say a terminal there is critical to future success. Finding a route into downtown remains a challenge, but city leaders expressed support for the idea.

The Santa Fe hub could be an ultimate destination, as transit officials hope it will blend regional and commuter rail lines, along with the current Amtrak line that travels from OKC to Fort Worth. Currently, there is no direct rail route into Santa Fe Depot, and Eastern Flyer officials say the best short-term solution might be to bring the train into Bricktown and construct a temporary platform.

“It may work alright [as it is], but I think it will be a deterrent to a long- term [success] to not have it reach downtown,” Ward 4 Councilman Pete White said. “There are solutions on this end to at least bring the train into Bricktown.”

Print headline: Easy rider, A long-awaited passenger rail line from Oklahoma City to Tulsa will soon be a reality, as might plans for expansion.