Woodrow Wilson Guthrie has been long associated with Okemah, his birthplace. Guthrie was born on July 14, 1912, and four days later, his father Charley was quoted in The Okemah Ledger saying ever since Woody had arrived, he had been “hollering for Wilson,” namely the newly nominated Democratic presidential candidate Woodrow Wilson.

Little is known about the troubling time in his family’s history when they moved from Okemah to Oklahoma City, July 1923-July 1924, even after searching public records, archives and interviews with surviving family members. In Woody’s 1948 manuscript High Balladry (part of the Woody Guthrie manuscript collection housed at the Woody Guthrie Center in Tulsa), he wrote of the move: “It was my birthday, to be right truthful about it, July the fourteenth, Bastille Day over in France.”

He had just turned 11 years old.

“We moved all of our stuff in an old Model T truck up to Oklahoma City, 76 miles to the west of us, and lived in the shackiest house there was to be found out on West Twenty Eighth Street,” Woody wrote in High Balladry.

In the summer of 1923, the ride in a Model T from Okemah to OKC with household belongings and a young family in tow would have taken at least three hours at about 30 miles per hour.

But finding the exact location of Guthrie’s childhood home hasn’t been easy, despite his description; local and national historians agree there isn’t enough substantive data available to pinpoint the address.

To further confuse things, research shows that “West Twenty Eighth Street” could have meant NW or SW 28th Street, as nothing in the existing literature is clear on that point. Deduction, description, records from the Oklahoma History Center and OKC public schools and text in Woody Guthrie: A Life and Ramblin’ Man indicate the family lived on NW 28th Street, near N. Classen Boulevard.

What was discovered were school enrollment records in OKC and Okemah public schools. In September 1923, Charley enrolled Woody in the fifth grade and his 5-year-old younger brother George in kindergarten in OKC.

While here, all family members pitched in to make ends meet.

“I delivered milk for a lady. Papa delivered groceries for a store for a dollar’s worth of trade a day,” Woody wrote in High Balladry. “Roy (Woody’s older brother) worked in a service station down along the Belle Isle trolley tracks on Classen Boulevard.”

At the time, Classen Boulevard was a two-lane road along the Belle Isle trolley tracks, which led to the popular Belle Isle Recreational Lake and Park, where Penn Square Mall is located today. 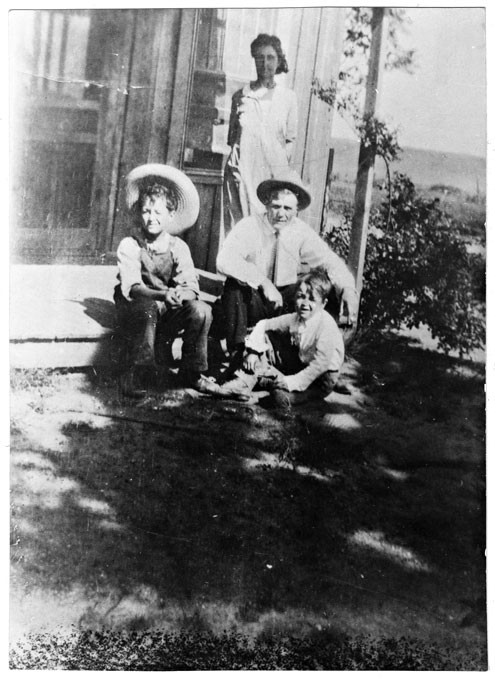 A look back What led the Guthrie family to OKC was a series of misfortunes. In earlier years, Charley Guthrie was a prosperous, prominent and sometimes controversial citizen in Okemah.

He won an election as the new district court clerk and sold auto licenses, insurance and real estate. The walls of his seven-room house were lined with law books. Charley joined a Masonic lodge in Okemah and became a member of the Methodist Church.

Multiple reports show that Charley also was a fervent anti-Socialist. The movement was on the rise in Oklahoma and the Midwest, and he wrote often about the topic in local newspapers and self-published a booklet about his beliefs.

“The purpose of this little book is to give the reader an idea of the dangerous and poisonous fangs of the tempting serpent which is lurking behind the advancing claims of socialism,” he wrote in the booklet.

Woody’s father’s views would starkly contrast his own social leanings during and after the Great Depression. However, Charley was a powerful influence in Woody’s trajectory as a musician and activist for civil and workers rights.

As a youth, though, Woody’s family bonded through music; his parents sang to him often, and Charley sometimes performed as a square dance caller. And Woody’s mother, Nora, would sing songs, including old Scots-Irish ballads, hymns and spirituals, which she would accompany on their upright piano.

When Woody was young, Nora was already showing signs of Huntington’s disease, the genetic disease that would later claim Woody’s own life in 1967. Undiagnosed, she showed frequent erratic behavior, such as throwing objects, sometimes drifting off to an imaginary world and involuntary arm motions. The books Bound for Glory, Ramblin’ Man and Woody Guthrie: A Life report that her behavior was noted by the townspeople.

Then, more misfortune followed after a series of fires.

First, their home burned to the ground, and then another fire claimed the life of Woody’s sister Clara. In 1919, under questionable circumstances, Clara’s clothing quickly caught fire while she was filling a coal-oil stove. The fire burned all of her clothing and most of her skin; records show that she tragically died the following day at age 14.

When the price of wheat collapsed, the Guthrie family found itself almost broke. Looking for a fresh start for Nora’s health and the children, the family moved to OKC.

Charley’s mother’s half-brother Leonard Tanner offered him a job at Ace Motorcycle Company as a statewide sales agent based in OKC. With the promise of a comfortable salary of $200 per month, it appeared that the family’s luck would turn.

However, shortly after their arrival, Charley read in the newspaper that Tanner was killed in an automobile-motorcycle wreck in Chickasha on his way to OKC. Family members and historical documents confirmed that he sustained a fractured skull and died instantly.

After the tradgedy, the Guthries took any job they could and tried to make a go in their new home.

“When we moved into an old house out there on 28th Street, she felt better. She cooked. It tasted good. She talked. It sure sounded good. She would go for days and days and not have one of her spells,” Woody wrote of his mother in his semi-autobiography Bound for Glory.

However, they were not destined to stay here long.

“We never did get a rug laid down on the bare floors in the Oklahoma City house. No paint outside or inside. Our stuff stayed packed in little boxes like we were out camping inside the old house,” Woody wrote in High Balladry.

“Our family was topsy-turvy during those years,” said Mary Jo Guthrie Edgmon, Woody’s sister, age 92, in a recent interview in Shawnee. She was only one year old when the family moved to OKC, so she has no clear recollection of it. “Papa tried to start a new business there, but it didn’t work out,” Edgmon said. “Papa never complained, ever, even when he didn’t have anything.”

“He had the most beautiful full head of curly hair, that Guthrie hair,” Edgmon said in remembrance of Woody — it’s also reflected in Edgmon’s own beautiful white locks of thick curls. 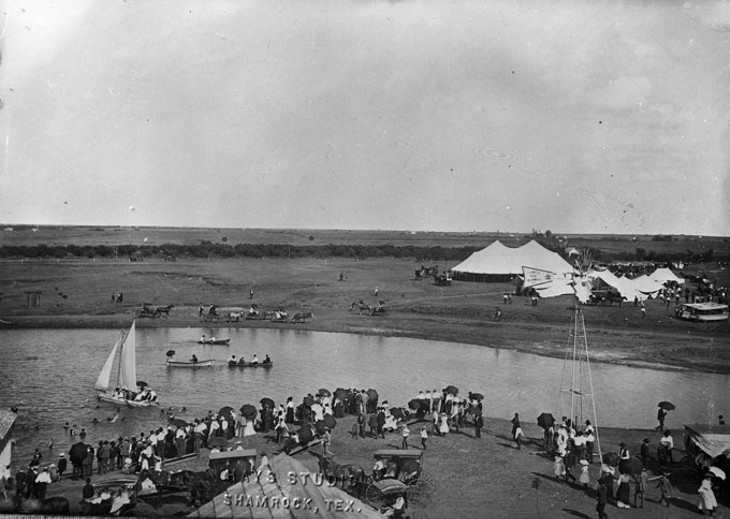 Returning to Okemah Fortunes did not improve in OKC for the Guthries. They packed up the Model T and went back to Okemah again on July 14, 1924, Woody’s 12th birthday, exactly one year after their arrival.

A 1924 notice in The Okemah Ledger noted the Guthrie family’s return. Charley was quoted as saying he “probably did not make a mistake by moving away from Okemah, but did make a mistake by not moving back any quicker.”

“Mr. Guthrie is receiving a warm welcome back to the old home town,” the notice said.

They settled into a house in Okemah, “the rottenest and wormiest and the dirtiest, dustiest house in the whole town,” Woody wrote in High Balladry.

By September 1924, Woody was again enrolled in school. Charley worked at commissioning automobile licenses. However, Nora’s health declined and she was finally institutionalized in Norman in 1927. Woody was 14 years old.

Oklahoma City The city was rapidly growing during 1923-1924, bustling and thriving. New neighborhoods with elegant houses were being platted. Trolleys linked neighborhoods to downtown. Research shows that Charley might have delivered groceries to these new neighborhoods.

The Belle Isle Recreational Lake was not far away and offered a small zoo, a bathhouse, a boat dock and a carousel, most likely not far from where Roy worked at the service station on Classen.

Woody must have sensed and observed the growth, energy and excitement in the relatively new capitol city.

Over the years, Woody traveled the country and helped carve out a singularly American niche as an activist, singer, songwriter, artist, painter, poet and writer, and even rose to fame as a clog dancer, mandolin and guitar player and fiddler.

He went on to write more than 1,000 songs and always understood the plight of the disenfranchised as reflected in his writing, artwork and especially in his music. Mary Jo said that “Ramblin’ Round” is still her favorite song of Woody’s. “I just love it.”