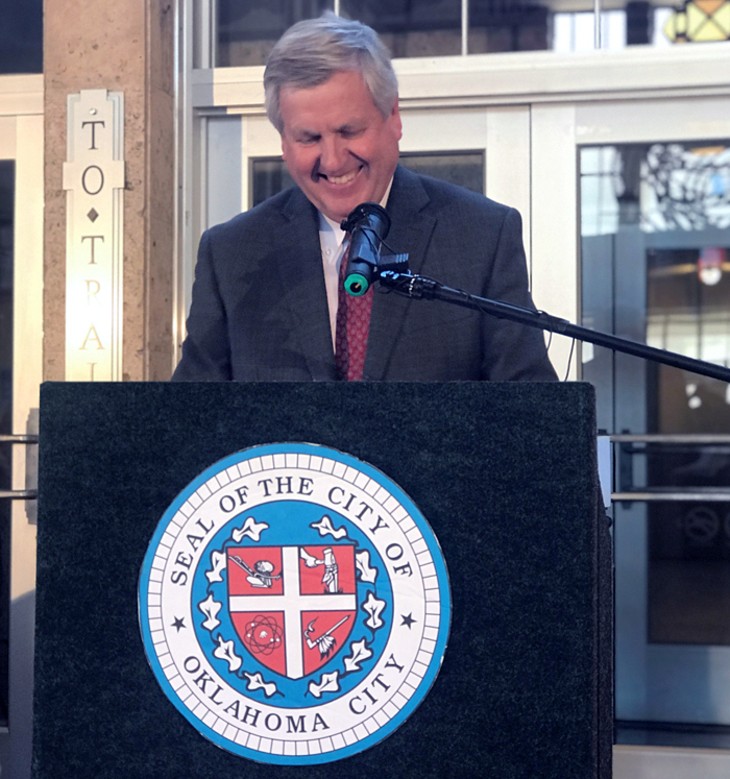 “I’d like to think I’m retiring while people still like me,” he said, “and while I’m still pretty good at what I do. I don’t want to be hanging around here in a decade or two and hear people whisper about the old guy who won’t leave.”

However, the collective whispers of Couch’s coworkers and staff started to roar from Oklahoma City’s municipal building as employees expressed surprise over the city manager’s decision.

After 31 years as an Oklahoma City employee, Couch will effectively retire Jan. 2 as the longest-serving city manager in Oklahoma City’s history. Couch has worked as city manager for the past 18 years. Before that, he said, he worked as assistant city manager MAPS director and city water and wastewater utilities director.

According to Sam Anderson, author of the recent Oklahoma City-based nonfiction book Boom Town: The Fantastical Saga of Oklahoma City, its Chaotic Founding... its Purloined Basketball Team, and the Dream of Becoming a World-class Metropolis, dozens of city managers came and went in very little time before Couch took on the role. One stayed for as little as two days, and the average tenure was less than five years each.

“In 50 years from now when the demand for water has increased significantly, Jim will be known for saving us.” — Ed Shadid tweet this

“In the seventy-three years preceding Couch, OKC had run through thirty-four city managers,” Anderson wrote in Boom Town. “Couch was a professional’s professional, able to get even the most complex projects done on schedule and on budget.”

Couch is also leaving at a time when his methods are under some scrutiny. Two recent resolutions introduced to the city council centered on transparency of proposed business agreements. In the Sept. 19 issue of Oklahoma Gazette, Shadid was reported as having watched as Couch and Alliance for Economic Development director Cathy O’Connor would meet with a few city council members to discuss city business proposals before and after meetings of the city council. The resolutions would require that transactions like the sale of city property and economic incentives like $1 million to Amazon’s fulfillment center be subject to three public city council meetings. 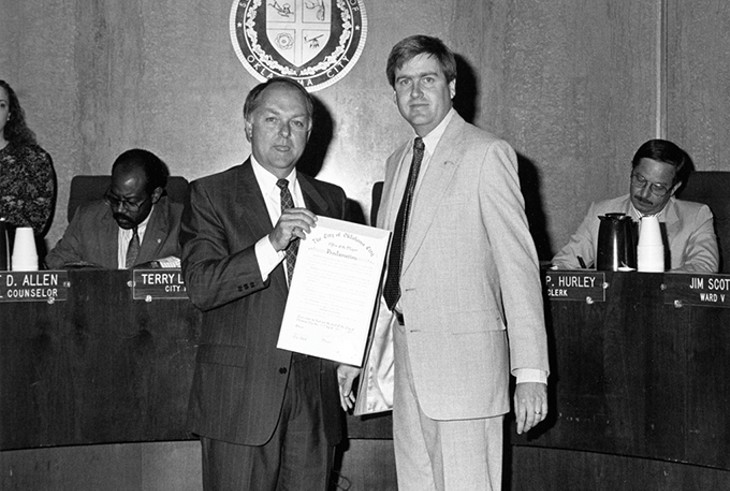 Couch salso erved as a trustee to several organizations including the airport trust, zoological trust, Central Oklahoma Transportation and Parking Authority, Metropolitan Area Schools Trust, Riverfront Redevelopment Authority, Economic Development Trust and McGee Creek Authority. Couch is also the chairman of United Way of Central Oklahoma’s board of directors, a role he said he will keep following his retirement.

His involvement in the organizations is more a testament to tactic than enthusiasm.

“I have loved working with the people here; I’ve developed strong friendships and have thoroughly enjoyed the company I am in,” he said. “However, there are benefits to being involved in one’s community that reach beyond enjoyment.”

Shadid said his past role as city water and wastewater utilities director, for example, likely helped him accomplish what many consider to be his biggest success: securing water rights for OKC.

After years of negotiations between Chickasaw and Choctaw tribe leaders, Couch played a winning hand in securing a landmark settlement in 2016 that guaranteed city residents indefinite access to water from lakes Sardis and Canton.

“In 50 years from now, when the demand for water has increased significantly, Jim will be known for saving us,” Shadid said. “The cities that are able to secure water now will thrive then, and the cities that don’t will face challenges. Securing water rights for Oklahoma City residents makes his role in getting the Thunder look like child’s play.”

Couch helped bring the New Orleans Hornets to Oklahoma City temporarily after Hurricane Katrina left the team without a court to play on. He later secured a permanent home for the OKC Thunder.

“There has been a lot of talk about the MAPS mayors but very little about the MAPS city manager,” Cornett said. “Jim Couch would never mention it because he’s a humble person who’s happiest working behind the scenes, but he was an integral part of Oklahoma City’s renaissance. It’s one thing to have a vision and another thing entirely to implement that vision.”

Couch’s Sanders analogy extends beyond just leaving at the right time. While Sanders’ retirement came as a surprise to teammates, management and sports enthusiasts alike, those who closely followed the football player’s career took the news in stride.

The story that was rarely told was that Sanders had played as a running back for the NFL for a decade when the average career of an NFL running back was under three years.

“There’s a lot of noise right now,” Couch said. “I know a lot of people are surprised, and I understand that, but honestly, I’ve been here for 31 years. I’m just ready to slow life down a little.”

Couch said he intends to stay in Oklahoma but hopes to travel more with his wife Cathy and his two grown sons.

“There’s another side to life that I am interested in exploring,” Couch said.

Couch said he owes his success as OKC’s longest running city manager to the people he has worked with.

“I think the best piece of advice I could give to the next person who has this job is to recognize what a good employee looks like and to value that person. I’ve been really blessed to work with this team,” he said.  “My advice would be to hire good people, keep good people and to use good people.”