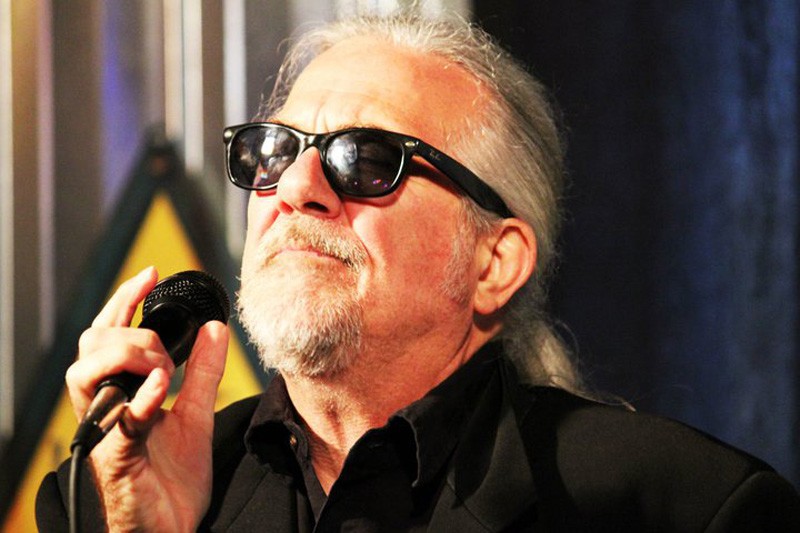 There are certain lines in society that some are scared to cross. For entertainers like Darryl Rhoades, those lines exist to be exploited in the name of fun.

His comedic styling — a style consisting of black attire; dark sunglasses; a long, white ponytail; and a goatee to match — is based in satire and paronomasia, with a rapid-fire cadence and punch lines that are sometimes delivered faster than the audience can keep up. He’s inspired by musicians like NRBQ and Frank Zappa, revering comedy gods like George Carlin, Lenny Bruce and Richard Pryor and self- identifying with Jonathan Winters.

Early in his career, he had a lot of characters. His first taste of success was with his satirical band, the legendary 12-piece Hahavishnu Orchestra, but he now focuses on spontaneity and keeping the audience involved with quirky puns, utilizing misdirection and sing-alongs.

Rhoades’ comedy isn’t garnished with expletives; it is clean but definitely for adults. He puts politics on blast, but he doesn’t preach to the audience. He leans left in his personal ideology, but he doesn’t use his medium as a pulpit. However, nothing is off limits for Rhoades, who often lambastes the IRS and society’s lack of cell phone etiquette, among other things. He also has plenty of jokes about genitals and common sense and can veer off on hilarious tangents if the opportunity presents itself.

“I get bored with people who go on and on about politics. I like to have fun with the audience,” he said. “I’m all about people walking out and feeling good about what they just saw.”

Rhoades is a drummer by trade, and music remains his passion. With 12 albums of comedy and music to his name, Rhoades has also played with the likes of Tom Waits, Jerry Lee Lewis, Chuck Berry and scores of other famous musicians. He was in the movie Crazy Heart and once hosted an Internet radio show that garnered around 10,000 listeners a week.

“I like to shake things up everyone once in a while and do something different,” Rhoades said. “When I decided to start doing stand-up and break up the band, it was a pretty easy transition because the main thing is getting used to being on stage, getting used to the audience, and I had that for years.”

Rhoades’ latest album, Darryl Rhoades Presents Songs For Teenagers in Heat — a mixture of music and comedy — was released with the help of Kickstarter, and he surpassed his goal in a month’s time.

While he is looking forward to doing more music, he won’t be playing any instruments during his set in OKC. However, he plans to rock his audience with comedy either way.

The show starts at 10 p.m. in the small ballroom of Bricktown Hotel & Convention Center. USA Martial Arts Hall of Famer Brian Rundus will emcee the event.